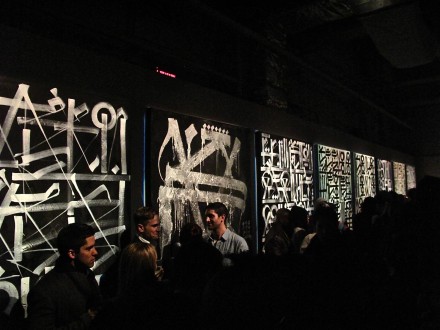 RETNA “The Hallelujah World Tour” (2011). All photos by Art Observed

In the 1980’s Jean-Michel Basquiat became one of the most significant artists of that decade and those that followed in part through his art being recontextualized by his travels from the gritty world of the street into the paths of the wealthy, famous and fashionable.  Many years later, the fashion and media elite diligently cultivate a similar paradigm, and in a scale that is immediately as grand a display as it ever was in the time of Basquiat.  What is notable here perhaps however, in RETNA’s recent exhibition, is that rather than the artist being serendipitously integrated with the scene, the scene is now constructed in formidable scope and scale and seems to plug the artist in.  The result is something that, if not significant for the art itself, is considerable as a reflection of how art can be marketed.

The New York debut of LA – based street artist and muralist RETNA’s exhibition “The Hallelujah World Tour” in the West Village on Thursday night, opened to a spectacle worthy of its positioning during fashion week, drawing a packed and trendy crowd to the warehouse space located almost at the water’s edge. Returning from a sold-out show in Art Basel Miami Beach (also likely the world nexus of art merging with fashion and commerce), RETNA’s work was here received by a diverse mob of invited New York insiders who were able to be granted access by the best in class, and no doubt expensive, PR teams checking in attendees at the door.

An commendable display of publicity magic supported, as Paper Magazine-described them “jet-setting art dealers” Andy Valmorbida and Vladimir Restoin Roitfeld (son of former French Vogue editor Carine Restoin Roitfelt) and the art displayed.  The show included included 35 new works created for the exhibit as well as various 3-dimensional works showcased in the center of the sprawling space. Curated by PM Tenore (owner of street wear brand RVCA), the installation featured RETNA’s signature monochrome canvases which coated the walls from floor to ceiling. The highly stylized lettering featured in RETNA’s work draws influence heavily from the geometric techniques of Islamic calligraphy, however recently RETNA (née Marquis Lewis) has also begun to incorporate elements of ancient cultures such as Latin America and Egypt into his patterns. 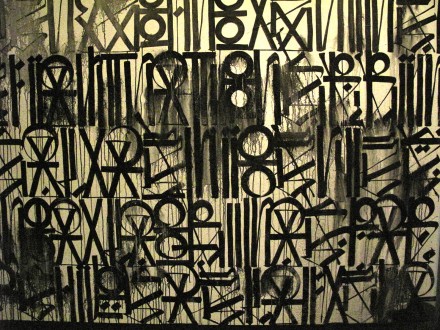 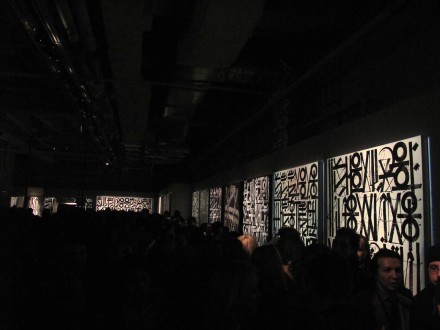 Stars, models and heiresses seemed all in attendance, including Chris Brown, Lily Donaldson, Amanda Hearst and Charlotte Casiraghi of Monaco’s royal family. As these and other prominent figures circled the room, the artist could be seen slathering paint on the installation in the center. This fusion of fashion and art was intentional and no holds barred, as Vladimir Restoin – Roitfeld explained in an interview with Style.com: “It’s not only fashion—I’m trying to present him to a broad audience.”  According to Restoin-Roitfeld, 90% of the works had sold by the middle of the event, which is likely true considering the turnout.  Some, however remain unimpressed: Art blogger Hrag Vartanian deemed the works as “unambitious” and “fashionable wallpaper”. Writing for Hyperallergic.com, he stated “I think Retna is talented but this show won’t have much appeal for those beyond the fashion world, which tends to have an affinity for graffiti’s narrative-less banter, and graffiti fans, who will be drawn to the works because of their worship of linear play.” 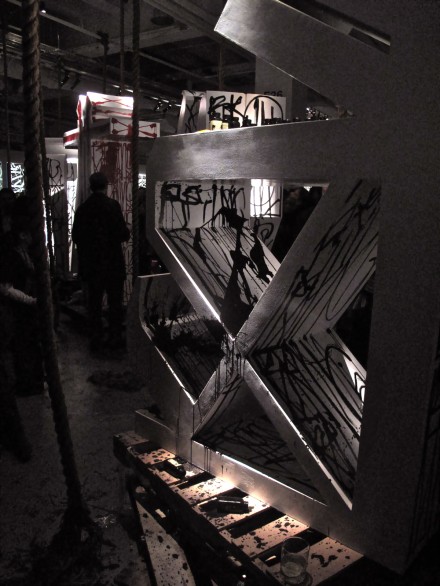 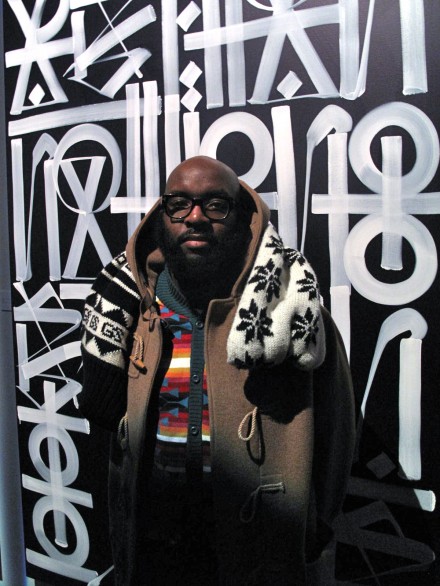 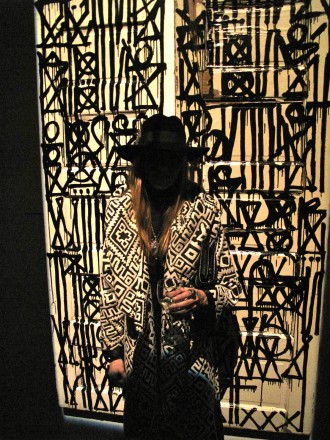 In an interview with Black Book Magazine, RETNA describes his work as contemplative, inspired by his own life experience and story.  He explains “It’s a collection of paintings I brought with me. A lot of what I write has to do with death and waiting for that time, and for people who have passed away. They’re reminders, conversations that I have with myself. They’re not meant to scare people, but at the same time they’re not meant for too many people to understand. I acknowledge things that have happened.” The show will soon continue on to locations in Hong Kong and London, no doubt within a similar highly financed and media-digestible context, where the artist hopes to spread his message further. 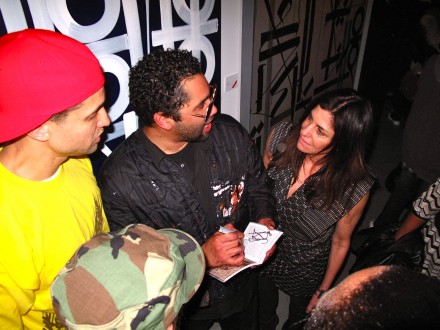 The artist signs an autograph. All Photos by L. Streeter

This entry was posted on Saturday, February 12th, 2011 at 3:08 pm and is filed under AO On Site. You can follow any responses to this entry through the RSS 2.0 feed. You can leave a response, or trackback from your own site.