Tuesday evening’s forty-two lot sale of Impressionist and Modern Art at Sotheby’s London brought in £68.8 million (or $111 million) for thirty-two lots sold. The auction house reports being “very pleased” with the total, which is the fourth highest ever in the department at the London location. The featured lot, Picasso’s La Lecture, exceeded its presale estimate after slow, thoughtful bidding by at least seven interested parties that increased in increments of £500,000. It sold to a telephone bidder for £25.2 million against a presale estimate of £12-18 million (estimates do not include the buyers premium, prices realized do). The real surprise, though, came when both Giacometti lots which carried the second and third highest presale estimates failed to sell. Bidding for an oil on canvas portrait of the artist’s brother ended at £2.7 million and a bronze sculpture of the same subject passed at £3.2 million. 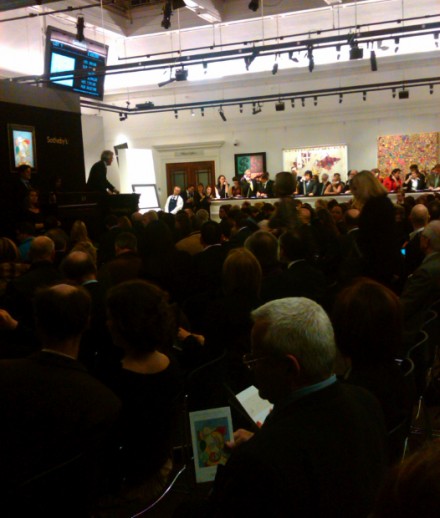 The sale room at Sotheby’s London on Tuesday, via Art Observed 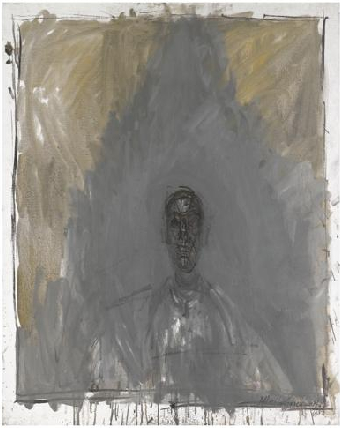 The memory of last February’s record-breaking sale of L’Homme Qui Marche I at Sotheby’s London for £65 million (or $104 million) is still fresh and made the failure of these two lots particularly noticeable. When asked about what these results might say about the state of the market for Giacometti’s work the auction house responded by saying that demand for any particular work rests on a variety of factors and pointed an eye to the future by noting that works by the artist will also be offered during the “Looking Closely” sale on Thursday. 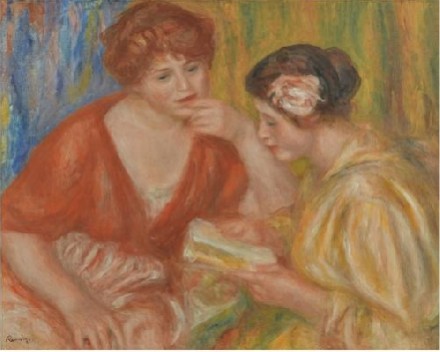 A few other top lots also failed to find new homes. A Renoir that was painted a year before the artist’s death in 1919 just missed its low estimate when bidding stopped at £1.8 million. A Marc Chagall oil on canvas that carried presale estimates of £1.3–1.8 million was also bought in. The present owner picked it up at Christie’s New York in 1997 for just over $1 million. 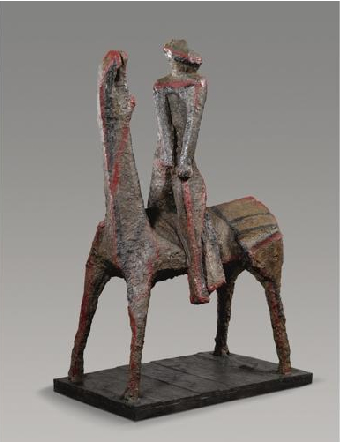 The presale estimates for a monumental sculpture by Marino Marini indicated that Sotheby’s believed this lot could break the auction record for the artist set last October at Christie’s in London. While it didn’t surpass the £4.5 million required to make history, it came close when it sold for £4.2 million.

Bidding was spirited for a few lots. Offers for René Magritte‘s Le Maitre D’ École came in so quickly that the auctioneer’s routine indication of a bid coming from “here” or “there” turned into “Everywhere!” The lot sold for £4 million, more than double the high estimate, and set the record for a work on paper by the artist at auction. 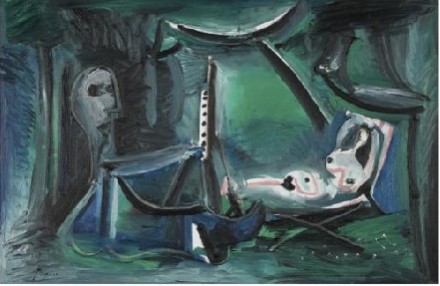 A similar result was had by a verdant Picasso canvas that was expected to fetch up to £800,000. It found a buyer for £2 million.

The sale total of £68.8 million is comfortably within presale estimates of £55-79 million for the forty-two lots. On Wednesday evening rival auction house Christie’s will present a forty-six lot sale estimated to fetch £54-80 million, immediately followed by a thirty-one lot auction of Surrealist works estimated to fetch an additional £19-28 million. Check back for results.

This entry was posted on Tuesday, February 8th, 2011 at 8:39 pm and is filed under AO On Site, Art News, Auction Results. You can follow any responses to this entry through the RSS 2.0 feed. You can leave a response, or trackback from your own site.