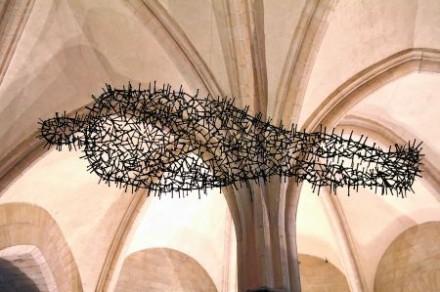 Antony Gormley, famed English sculptor and creator of the well known public installations featuring manifestations of the human form “Angel of the North” (Gateshead, England) as well as “Event Horizon“(New York/London) and “One and Other” (London) recently unveiled his newest creation in an uncanny location – a crypt within Canterbury Cathedral dating back to the 12th century. The  2 meter-long piece, entitled “Transport”, hovers suspended from the vaulted ceilings in permanent limbo. Shaped in the form of the human body, the work is entirely constructed from hand-made nails re-purposed from a recent restoration. Though seemingly gruesome, Gormley is in fact attempting to explore a higher level of meaning above the physical realm. The specific form calls attention to the idea of our own mortality, as Gormley seemingly is pointing at the transient nature of the human body. 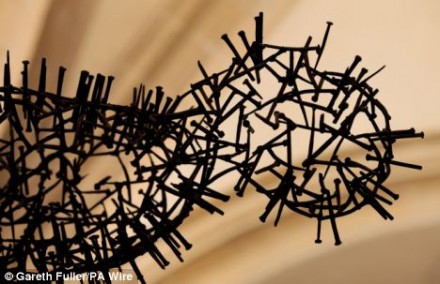 “The body is less a thing than a place; a location where things happen,” explains Gormely in a press release. “Thought, feeling, memory and anticipation filter through it, sometimes staying but mostly passing on, like us in this great cathedral.” The idea of sacred space is very much important to Gormley, as his other works often depict the human figure and the space it occupies in a material context. Gormley received a Turner Prize in 1994 for his work “Field For the British Isles” and has since continued to investigate and reanimate the human image.

This entry was posted on Thursday, February 10th, 2011 at 5:52 pm and is filed under Art News. You can follow any responses to this entry through the RSS 2.0 feed. You can leave a response, or trackback from your own site.