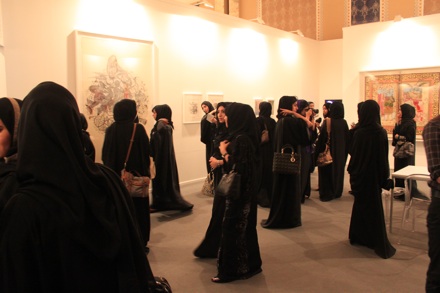 Art Dubai (2011). All images John Mollett for Art Observed.
Bringing 75 art galleries from 30 different countries, Art Dubai is arguably the most significant Art Fair in the burgeoning Middle East. One of its main goals, as stated by Director Antonia Carver, was to “aim for Art Dubai to be a fair of discovery- for the international collectors curators, artists, galleries and museum groups that attended the fair to catch up on all that is happening in the Middle East and Southeast Asia.” Despite this, the fair has a reputation for forcing the removal of work seen to be possible violating censorship regulations.  This may explain why, upon attending the fair, it became clear that although a few galleries were using the venue as a forum to expose both conceptual work and work by artists who have yet to develop a reputation in the region, most chose a program that was relatively safe, and which appeased the decorative senses of certain patrons rather than showing work more clearly representative of visionaries in Middle Eastern art.
More text and images after the jump… 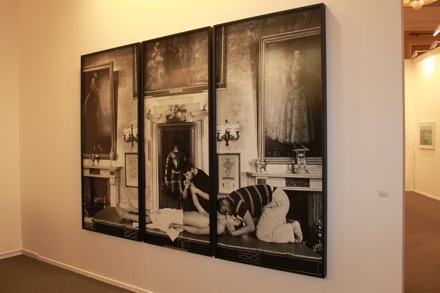 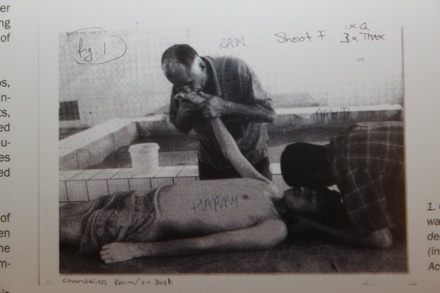 Inspiration photo for Reza Aramesh’s Action 75.
It was Art Observed’s privilege to enter the fair on the morning of March 17th when it was entirely closed off to the public, except for a group of Zayed University students, comprised of 80 young women in full burqa chatting and pulling highly advanced cameras out of their LVMH-subsidiary bags.  I noticed one of the women looking at one of the most shocking and controversial pieces at the fair, Reza Aramesh’s “Action 75 City of Fallujah. A father washing the body of his loin clothed nude dead son,” which was exhibited at the booth of a local Dubai notable, Gallery Isabelle Van Den Eynde. The triptych photograph depicts the artist’s interpretation of a 2004 press photograph, in which a man embraces a dead body, resting his forehead on the cheek of the deceased with his head is facing away from the viewer. In this version, however, two men who appear American (possible soldiers) perform a similar action in what appears to possibly be an abandoned palace. When I asked one of the students what she thought of the piece, she replied that “the intimacy between those two men is not that of a father and son, and they seem to be of a similar age. I find that intimacy to be very inspiring.” Isabelle Van Den Eyde’s representative didn’t seem to feel that they had taken much of a risk by showing this work in particular, especially considering that many of Reza Aramesh’s photographs and sculptures explore the male body through erotic imagery of scantily clad men, emphasized by titles such as “Israeli soldier points his gun at Palestinian youth asked to strip down as he stands at military checkpoint along the ‘separation barrier’ at the entrance of Bethlehem.” The artist, Reza Aramesh, has a strong collector base in Dubai, and four of his works were sold at the 2011 fair itself with further sales taking place offsite. 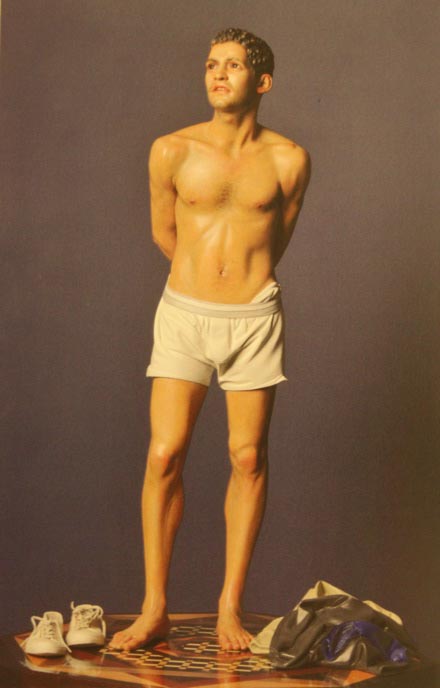 Reza Amaresh, Israeli soldier points his gun at Palestinian youth asked to strip down as he stands at military checkpoint along the ‘separation barrier’ at the entrance of Bethlehem (2010)
Another local Dubai Gallery, The Green Gallery, used the entire booth to exhibit the work of Kamrooz Aram, who also currently has an exhibition at Perry Rubenstein Gallery in New York. Yasmin Atassi, the director of Green Art Gallery, said that “It was important for us to show Kamrooz works at Art Dubai. He is in some really fantastic collections worldwide and this is a great forum to introduce him to this region. Unlike other artists in the region, he doesn’t self-orientalize his work. Kamrooz was born in Shiraz, Iran and received his MFA from Columbia University and this is his first time showing in the region. Because we are a local gallery and our transportation costs are much less, we have the luxury of being able to introduce an artist rather than showing what we know will sell as some other galleries do. We have placed Kamarooz’s work in some great local collections and been able to direct many people to our space where we have a 7-channel video installation by Hale Tenger.” A selection of collages on view were constructed with vintage catalogs of Iranian art objects covering a span of 7,000 years. The series challenges the “false premise that Ornamentation serves the same purpose around the world and that it is inherently meaningless and excessive.” 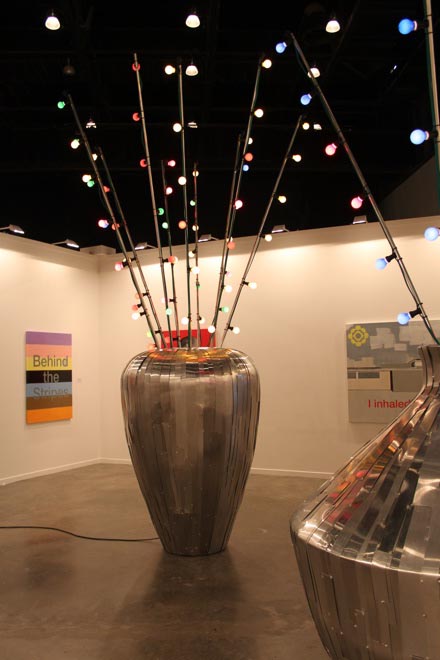 Art Dubai (2011)
Johannes Konig, partnering with Gallery K, had one of most challenging booths at the fair and exhibited solely German artists. Konig saw this fair as an opportunity to bring German art to the Middle East and a deeper understanding of Middle Eastern art back to Germany, as well as to meet new collectors. Konig showed three large indoor/outdoor sculptures by Michael Sailstorfer that had a strong, alien presence. Though non-monumental outdoor and public art sculpture is a relatively recent concept to the region, the gallery sold one to a Dubai collector for 38,000 Euros. The Konig team was quick to point out that they did not bring pieces that were too glitzy or gilded like many of the other galleries, but did try to appeal to the marketing while pushing the envelope. Next year, the gallery plans bring the work of artist Natasha Sadr Haghighian, an Iranian-born artist who lives and works in Germany.
Marianne Boesky exhibited works by two artists, Diana Al Hadid and Yoshimoto Nara. While the booth took little risk by showing Nara, a highly established artist, Al Hadid is an emerging artist who gained international and local notoriety after being included in the last Sharjah Biennale. The booth that balanced the testing of a foreign market with showing work inherently desirable to collectors. Serra Pradhan, director of Marianne Boesky Gallery, said that the results of the fair have exceeded expectations. Two of Al Hadids pieces, a large sculpture and a drawing at 65,000 USD and 12,000 USD respectively, have sold to foundations in the region. Serra also noted that this fair is different from others because most of the collector base is a mystery where as in a fair like Art Basel or Art Basel Miami, it is much easier to identify a patron who has visited the booth or gallery prior. 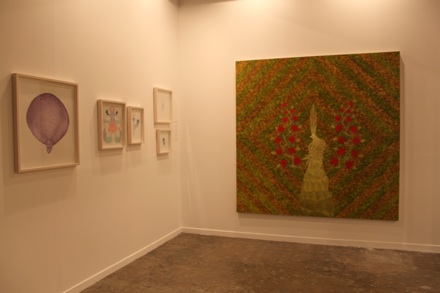 Art Dubai (2011)
My favorite discovery of fair was the work of Nadia Kaabi-Linke. Kabbi-Linke was one of three winners of the Abraaj Capital Art Prize, the only art prize specifically drawn from the Middle East, North Africa, and South Asia. Tunisian born, Kaabi- Linke was exhibited in the last Sharjah Biennial, and this year her plexi-glass imprinted works were on view at Berlin based Galerie Chrisitan Hosp.  From her series, “Crime Scenes”, Kaabu-Linke used forensic powder, as well as a chemical deterrent for graffiti, to lift imprints of the past from surfaces of Berlin. These imprints were then transferred to plexi-glass, ultimately revealing a history of public expression in an urban environment.
Art Dubai is only four years old and takes place in a region where expression and discussion of delicate social topics is often silenced. The Sharjah Biennale, which takes place in a more strict state 20 minutes away, opened simultaneously with Art Dubai, and was able to exhibit more conceptual work on the forefront of experimentation and tackling controversial issues, possibly because it was not relying on these works to sell. The programs that most of the galleries presented here prove that the fair is still seen as place to show safe, salable work that be quickly released into the hands of Middle Eastern collectors who, with increasing disposable income, are becoming more and more important to consider as major players in the funding of the art world.
-J. Mollett
Related Links:
Exhibition Page [Art Dubai]
The Dubai Art Fair and His Highness’ Censors [Huffington Post]
Billionaires Splurge on Middle-East Art as Dubai Fair Rebounds From Slump [Bloomberg Businessweek]
Art in the Middle East: Foment of the moment [The Economist]

This entry was posted on Thursday, March 24th, 2011 at 5:09 pm and is filed under AO On Site, Art Fair, Art News. You can follow any responses to this entry through the RSS 2.0 feed. You can leave a response, or trackback from your own site.