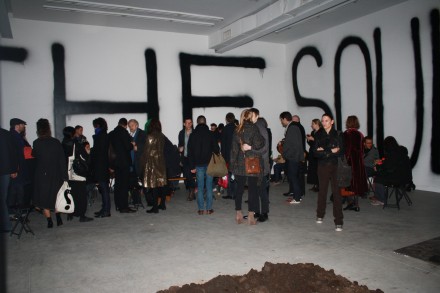 A view of the exhibit at Gavin Brown Gallery. All photos by L. Streeter, Art Observed.

On Saturday night, Rirkrit Tiravanija opened a new exhibition at Gavin Brown Enterprise in the West Village, completely redesigning the gallery space and re-purposing various rooms in order to host a dinner party of sorts. The show, entitled “Fear Eats the Soul” was named after the 1974 Fassbinder film “Ali – Fear Eats the Soul” which portrayed the story of two lovers together in Germany, who live in opposite worlds and fight to protect their love from racial tension and the scrutiny of others. Tiravanija himself comes from a widely diverse background; he was raised in Thailand, Ethiopia, and Canada and currently divides his time between New York, Berlin, and Bangkok. His acute global awareness certainly has an influence in this exhibition, which features a T-shirt printing factory producing shirts with equally politically-aware and nonsensical slogans in block print. The slogans feature a range of phrases, from solemn ones such as “BEHOLD YOUR FUTURE EXECUTIONERS” to silly word games and statements like “BRING ON THE LOBSTERS” which are hand-screened onto plain T-shirts. 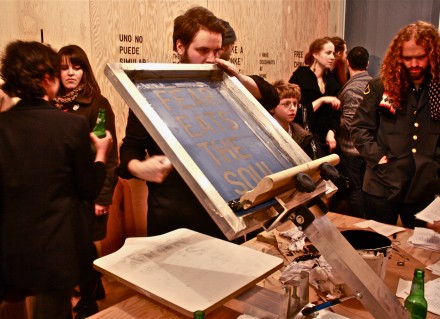 A view of the silk-screening workshop. 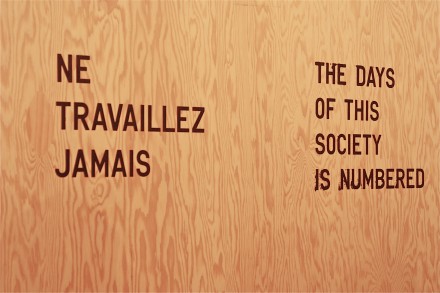 Tiravanija, a professor at Columbia University’s School of Visual Arts, has always been interested in the relationship between art and atmosphere and the interactions that go on between the artist, the viewers and the setting. His previous installations have often included food as a way of facilitating this ambiance of cultural exchange: early on, he began cooking for gallery-goers and in 1992 set up a mobile kitchen in an office space in Soho and began free meals to guests. This performance was later recreated at David Zwirner gallery in 2007. In the press release, Tiravanija explains the idea behind his work, stating that “Space and memory will fuse while the stomach demands a focus on the present moment”. 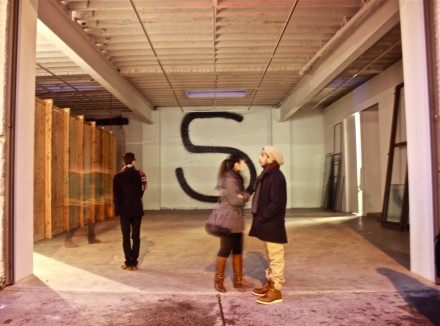 Tiravanija’s artwork, in changing how an “art space” functions, seeks to question the very role of the artist. His work is often categorized as an exploration of “Relational Aesthetics”, an idea coined in the 1990’s by French art critic French art critic Nicolas Bourriaud to analyze and categorize the expanding body of conceptual art.  Bourriaud defined the style as “a set of artistic practices which take as their theoretical and practical point of departure the whole of human relations and their social context, rather than an independent and private space.” 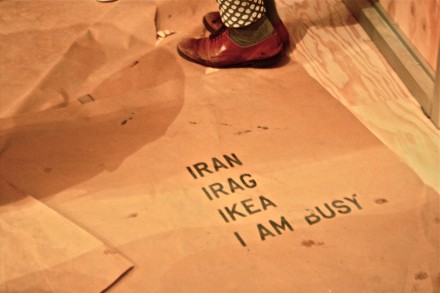 In a statement describing an installation at Walker Art Center, Tiravanajia explained “The situation is not about looking at art. It is about being in the space, participating in the activity. The nature of the visit has shifted to emphasize on the gallery as a space for social interaction. The transfer of such activities as cooking, eating, or sleeping into the realm of the exhibition space put visitors into very intimate if unexpected contact; the displacement creates an acute awareness of the notion of public and private, the installations function like scientific experiments: the displacement becomes a tool and exposes the way scientific thought processes are constructed. The visitor becomes a participant in that experiment.” This philosophy pervades most of his work, was present in ideas such as the Soup Kitchen (which charged 1$ per bowl) and the free-for-all dinner that was laid out.

The long dining table, filled with food and beer.
Another section of the exhibition presented works from a show in 1994 in which Tiravanija collaborated with the late Andy Warhol. Each of the pieces shown were created by the artists together, fusing elements from the body of work of each artist together. On display was a portrayal of Mao and a collection of beer bottles, a Brillo box and a wok could also be found in the space, all coated with some form of silver using an electroplating technique. 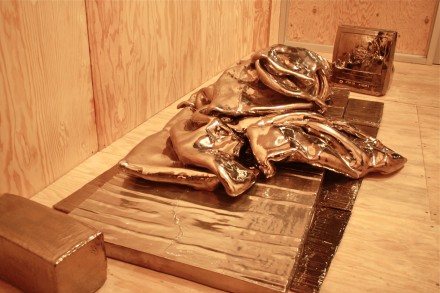 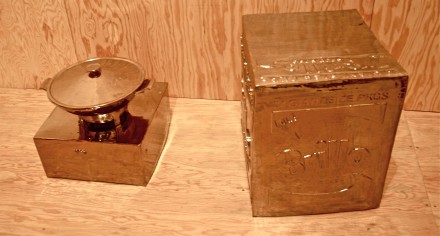 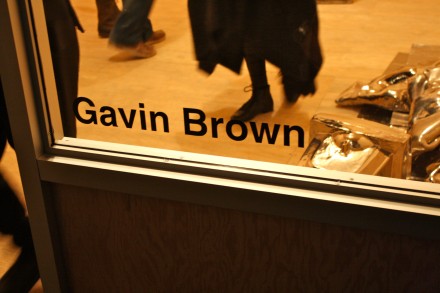 This entry was posted on Monday, March 7th, 2011 at 8:29 pm and is filed under AO On Site. You can follow any responses to this entry through the RSS 2.0 feed. You can leave a response, or trackback from your own site.