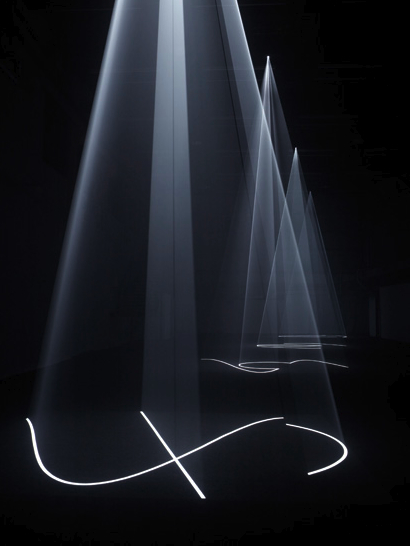 Now on view at Ambika P3 in London is an exhibition of four light projections by Anthony McCall, titled Vertical Works. The installation is presented by Sprüeth Magers, which is displaying a concurrent exhibition of related drawings at their London location. Though the four light works, created between 2004 and 2010, are abstract projections of lines and curves, their titles are purely figurative. Exhibited in London for the first time, Breath, Breath III, Meeting You Halfway, and You can be seen through March 26th at Ambika P3. The works on paper exhibition at Sprüeth Magers is up until March 27th. 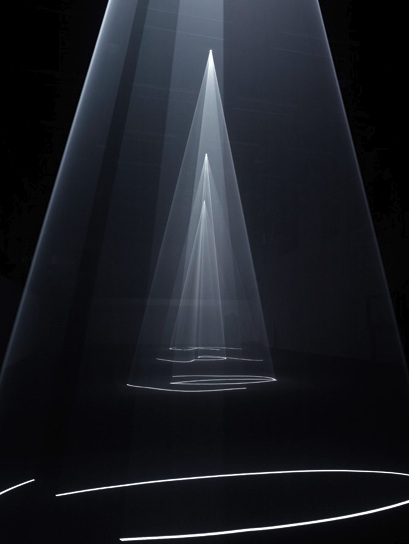 McCall became well-known in the 1970s for his “solid light” series that deconstructed film by focusing not just on the projected image, but also, and perhaps foremost, on the beam of light that emanated from the projector. Soon after, the artist took what would become a twenty year hiatus from the art world. In an interview with Time Out London, the artist explains the break: “One of the reasons why I stopped making the solid light films was that in the 1970s their visibility was dependent on dust in the air, which you always had in good old grotty, downtown, New York loft spaces, plus there were always a few people smoking. But when I began showing in brand new museum spaces I discovered to my horror that the works couldn’t be seen. In the 1990s the invention of haze machines, which produce a fine translucent mist of microscopic water droplets, re-opened the way.” 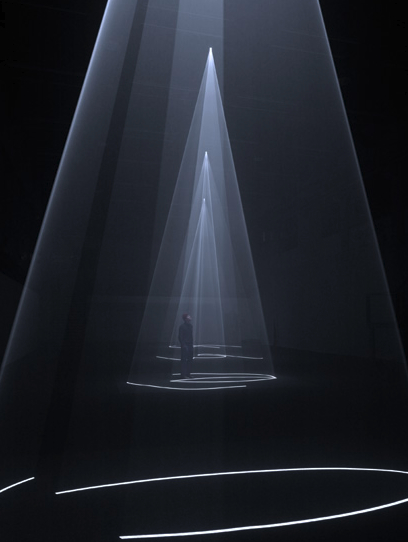 The use of haze machines is not the only thing that sets the present work apart from McCall’s work of the 1970s. His original “solid light” films were created with 16mm film. Today, the artist uses digital projectors and describes the difference between the two media in a 2007 interview with Tate Papers: “When a 16mm film is projected, there is a noticeable tremor to the projected image whereas the digital works, by comparison, are rock steady. Then there is the fact that the digital planes of light carry longitudinal striations which radiate from lens to wall (these are simply elongated pixels). The surface of the planes of light thrown by the film projector, by comparison, are like unblemished silk…You could say that film, being analogue, exhibits its age…Digital works do not do that, unless of course, it is ‘scripted’ in.”

Many of the works on paper on view at Sprüeth Magers are directly related to Vertical Works, including several sets of drawings that document the changing footprints of the light projections over time. The Works on Paper exhibit also contains drawings and photographs from the artist’s early period as well as a video of the most recent working maquette of his upcoming Column project, which will be constructed in collaboration with the scientist John McNulty. Column will be a twenty meter diameter column of warm air situated on a dock in Liverpool. It is being commissioned by the Arts Council for the 2012 Cultural Olympiad.

This entry was posted on Wednesday, March 23rd, 2011 at 12:01 pm and is filed under Go See. You can follow any responses to this entry through the RSS 2.0 feed. You can leave a response, or trackback from your own site.