Crossreferencing film and painting,  Gus Van Sant has never shied from an interdisciplinary approach to artmaking.  The show “Unfinished” is no exception.  Though the show bills both Van Sant and James Franco as the artists in charge,  it is heavy with Van Sant’s signature, especially in terms of the bold two dimensional art.  Van Sant uses watercolor and graphite to create striking images of the characters within his film, My Own Private Idaho.  These paintings are intimate while at the same time graphic and mindful of the medium.  Seven large-scale paintings adorn the front of the gallery, while a curious installation behind a curtain serves as its stablemate. 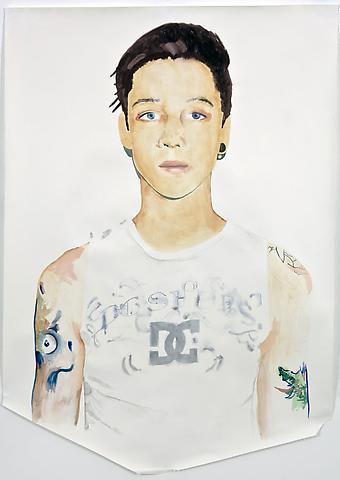 On one side of the curtain, the clean gallery walls showcase the visual art.  On the other side is an installation consisting of a couch, folding chairs, doughnuts and coffee, three VCRs, a monitor a screen.  A film plays.  It is an odd mix of AV room and basement, showcasing  the Franco/Van Sant film,  My Own Private River. The film lies somewhere between the footage that became its feature,  My Own Private Idaho, and the watercolors on the wall.  My Own Private River is near 100 minutes of unused footage from My Own Private Idaho, showcasing the late River Phoenix but also choice and delightfully raw performances by supporting actors.  It feels both voyeuristic and acceptable to indulge in the film- all 200 minutes, if you have the time- even encouraged by the laxity of the installation space.  The sound moves in and out, as do the viewers. Though this is the “feature” of the show, it flirts with being all of the show, while simultaneously being none of it. It is complicated, navigating between filmic and installation elements of the show and the watercolors, but it’s an engaging tug of war, nonetheless. 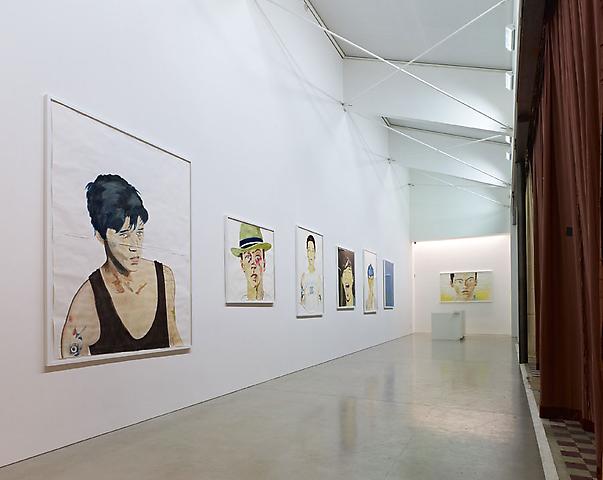 If the watercolors expose a sense of persona, why does the film seem to displace these personae for the glorification of River Phoenix? Is there a strong, deliberate link between the authorship of Franco, an actor with similar bravado and success to Phoenix, to River Phoenix himself? The installation seems to say no: that simple appreciation of filmmaking and talent go beyond the filmic identity both Franco and Van Sant.  Still- the installation is undeniably crafted by successful artists.  Their glorification of a fellow fallen artist seems to overcome what the figure in My Own Private Idaho and My Own Private River have to offer this particular show.

‘Untitled,’ however, triumphs over many other shows in that it isn’t wholly comprised of  or become hugely preoccupied with one-note celebrity themology. The interest of the show lies in understanding artistry, the nature of the world people do, and the stories behind a person’s legacy/individuality.   ‘Untitled’ does this by trying to balance- or at least form worthwhile dialogue between- the installation area and the paintings.

This entry was posted on Thursday, March 24th, 2011 at 12:37 pm and is filed under Go See. You can follow any responses to this entry through the RSS 2.0 feed. You can leave a response, or trackback from your own site.