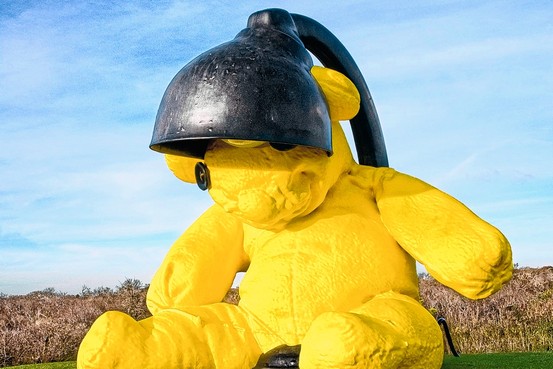 Untitled (Lamp/Bear), a 23-foot, 16-ton sculpture of bright yellow teddy bear slumped beneath a Bakelite lamp, will be on display at the Seagram Building (375 Park Avenue, at 53rd St) through September 2011. The piece, by Swiss sculptor Urs Fischer, is a highlight of Christie’s Post-War and Contemporary Art auction, and began its life as a 1-foot teddy bear, which was then scanned three-dimensionally with lasers in Switzerland and cast in bronze in Shanghai. Christie’s will be auctioning the installation on May 11th.

Brett Gorvy, deputy chairman of Christie’s, regards the New York-based Fischer as Jeff Koons’ heir apparent. “We have seen contemporary sculpture works by Jeff Koons selling at $25 million and Urs Fischer is the leading pretender to the throne,” he said. “He is considered the most important, the most provocative of contemporary artists today.”

Fischer made three versions of the installation between 2005 and 2006, one sitting on a Long Island property owned by entrepreneur and collector Adam Lindemann, and the other a part of Steve Cohen’s formidable collection. This edition, owned by an anonymous collector, reportedly received a private offer of $9 million before it was offered for auction, and expectations are that it will perform well at the sale.

The installation will remain at Seagram through September, at the behest of the artist.

This entry was posted on Tuesday, April 5th, 2011 at 8:01 pm and is filed under Art News. You can follow any responses to this entry through the RSS 2.0 feed. You can leave a response, or trackback from your own site.