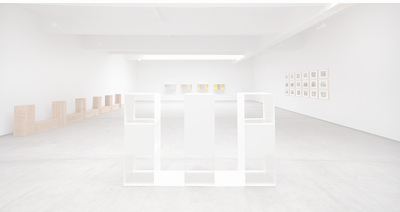 On view now through April 16th at the Paula Cooper Gallery is a group exhibition titled Elemental. What binds the selected works of Carl Andre, Jennifer Bartlett, Donald Judd, Sherrie Levine, Sol LeWitt and Robert Wilson is the use of “repeated elements arranged in a sequential structure.” The gallery notes that this strategy is often associated with minimal art, and the show pairs pieces by three pioneers of Minimalism with works by what the exhibition is defining as representatives of the second (and possibly third) generation of Minimalists. 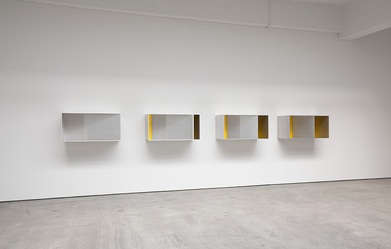 Elemental is anchored by instantly recognizable works by Donald Judd, Sol Lewitt, and Carl Andre. In the same room are works by Jennifer Bartlett and Sherrie Levine. Bartlett’s contribution of two steel plates with enameled black dots imposed over a grid is clearly a descendant of her Minimalist forefathers. 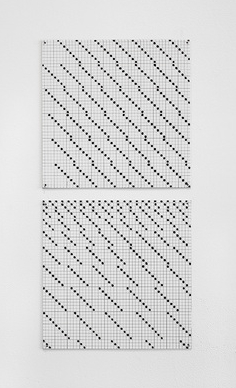 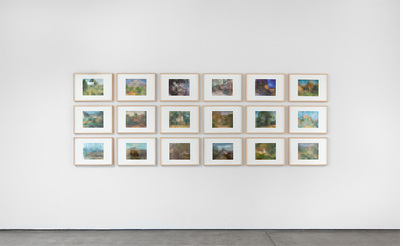 After Cezanne 1-18, a set of pixelated photographs of Cezanne paintings by Sherrie Levine, is also installed in the main gallery. Levine is best known (to some notoriously so) for appropriating the work of canonized artists for the purposes of commenting on the nature of the art object and the notion of originality in art. As opposed to her After Walker Evans series, Levine manipulates her photographs of the appropriated works in After Cezanne so that the Impressionist’s strokes are converted into squares of color. Aesthetically, After Cezanne looks at home amongst the other pieces in the gallery. 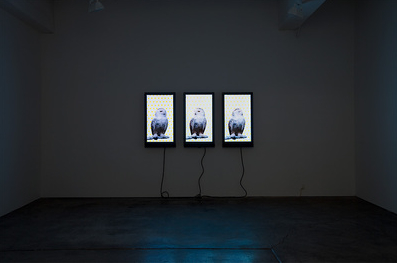 Three screens showing Robert Wilson’s Snow Owls Tryptic are installed in an adjacent gallery. Each screen shows an owl perched on a branch in front of a polka dot ground. The birds’ heads rotate to the tune of an operatic symphony as the creatures squawk. The gallery explains that Wilson’s work “re-imagines seriality and the grid for the digital age.”

This entry was posted on Wednesday, April 13th, 2011 at 12:42 am and is filed under Art News, Go See. You can follow any responses to this entry through the RSS 2.0 feed. You can leave a response, or trackback from your own site.