In late march, The Fundación Proa, a prominent cultural center in Buenos Aires, Argentina became host a to an impressive retrospective of world-renowned French – American Artist Louise Bourgeois. Bourgeois, who was born in Paris and later moved to New York, worked mainly in sculpture and is recognized for her contribution to the American Abstract Artists’ Group. Her work is largely autobiographical, drawing inspiration from trauma suffered in early childhood and describing the later emotional turmoil she underwent. For the first time in Argentina, a wide range of Bourgeois’ life’s work will be on display, including samples of her various mediums of production such as sculpture and installation and even a collection of her writings on psychoanalysis. The exhibition, entitled “Louise Bourgeois: The Return of the Repressed”, will additionally feature a cast of the prominent giant spider sculpture “Maman” (“mother” in French) guarding the entrance to the Fundación Proa. The replications of “Maman” maintain equally conspicuous and permanent positions in London, St Petersburg, Seoul, and Tokyo.

A view of the entrance to the Fundación Proa in Buenos Aires via Why on Earth Did I Move to Argentina?

Growing up in France, Bourgeois was born to gallery-owners whose turbulent relationship later provided material for the themes of betrayal and anxiety she would later pursue in her work. She attended the Sorbonne, and a few other art schools later before deciding to move to New York with her  husband Robert Goldwater. There she would spend the rest of her life, only returning to France to adopt a child. It was in New York that she would go on to become a recognized artist, earning her first retrospective in 1981, hosted by the Museum of Modern Art. She remained an incredibly prolific and diverse artist, creating works right up to her death last May. 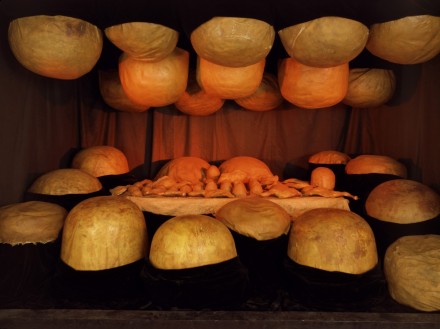 Louise Bourgeois, The Destruction of the Father (1974). via Fundación Proa

The exhibition, curated by Philip Larratt-Smith was organized with the help of Instituto Tomie Ohtake in San Pablo, Brazil, and supported by the Louise Bourgeois Studio in New York. It showcases a variety of famous works as the “Arch of Hysteria” (1993), the Red Room facilities (1994) and “The Destruction of the Father” which revolve around themes of filial and familial  love. Almost one hundred pieces created between 1946 and 2009 are presented, as well as large body of recently uncovered drawings and writings from Louise’s life, dealing with these themes and linking the exhibition together as a whole. 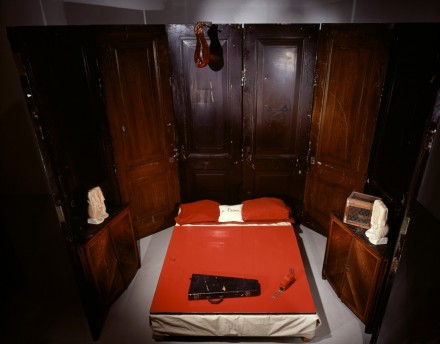 To complement the exhibition, various other events will be taking place. Every Saturday at 5 o’clock, starting in April, the Fundación Proa will invite distinguished professionals to offer their perspectives on the exhibit. The 1995 documentary Louise (Querida Louise) by Brigitte Cornand will be projected in the adjacent auditorium. The film “reveals the artist’s passion and inspiration that gave rise to her powerful pieces of work. Set in her house and studio in New York, the film draws on memories from infancy to draw an intimate portrait of an original and active artist.  The Spider, the Mistress, and the Tangerine by Marion Cajori & Amei Wallach, is a captivating tour of the world of the legendary artist and over six decades of her work.” (Fundación Proa). 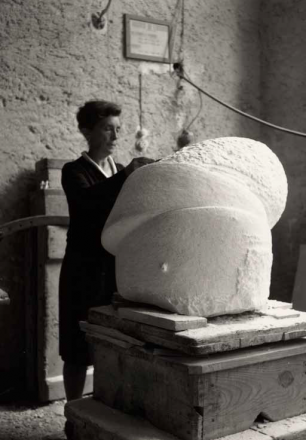 Bourgeois working on Sleep II in 1967. via Fundación Proa

This entry was posted on Friday, April 8th, 2011 at 12:15 am and is filed under Go See. You can follow any responses to this entry through the RSS 2.0 feed. You can leave a response, or trackback from your own site.