Dearraindrop, Mutant Pop (2010), via The Garage Center for Contemporary Culture

Organized by Kathy Grayson, director of The Hole and former director of Deitch Projects, in collaboration with exhibition designer Rafael de Cárdenas, “New York Minute” is in its current manifestation at The Garage Center for Contemporary Culture in Moscow. The show features over fifty artists living and working in and around New York City, who are are entwined by professional and personal relationships and whose work overlaps similar themes and issues.

If any city could be defined by its attitude, pace, and personality, it would be New York. “New York Minute” depicts a bright, energetic view of contemporary urbanity, with each artist depicting the city differently according to their varying perspectives. The show, which was previously shown in Rome, attempt to bring the New York “spirit” to a very different city.

Taylor McKimens, Pride of the Boondocks (2008 – 2010), via The Garage Center for Contemporary Culture

Grayson notes that New York City acts as “an expanded artist community,” where ideas can be lifted from billboards and subway ads or graffiti and spur of the moment performances. The show is sectioned into three “themes:” Street Punks, featuring gritty work from Dash Snow and Terence Koh,Wild Figuration, which has a colorful and vibrant tone that shows aspects of collaboration, and New Abstraction,  reflects on and re-thinks the abstract and its representation using modern, alternate techniques.

Many of the artists shown in “New York Minute” are associated with an as-of-yet unnamed movement that rose to prominence in New York pre-recession. Work made by artists like Snow and Koh, as well as Aurel Schmidt, Nate Lowman and Rosson Crowe, often in went hand-in-hand with the glamourous lifestyle of its makers, and revolved around certain institutions, including Deitch Projects, where Kathy Grayson was curator. 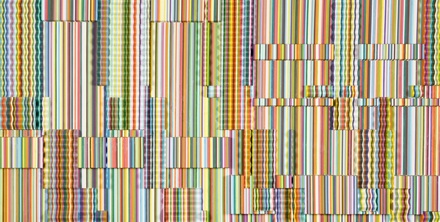 The Garage Center for Contemporary Culture is a non-profit arts space located in Moscow, whose mission is to explore and help establish contemporary culture. The space exhibits both International and Russian artists, as a way to bring art into Russia as well as bring Russian artists to the world. The all-encompassing survey that is “New York Minute” fits directly into the Center’s aim, though the eyes of another city. “New York Minute” offers a look into the culture and mindset of a group of artists based on the city they live in, and their overall attitude is reflected in the logo by Chris Johanson: a clock that appears to be working overtime in order to be present at every moment of the day.

This entry was posted on Sunday, May 29th, 2011 at 11:45 am and is filed under Go See. You can follow any responses to this entry through the RSS 2.0 feed. You can leave a response, or trackback from your own site.