Cyprien Gaillard The Recovery of Discovery (2011), via KW Berlin.

French artist Cyprien Gaillard’s “The Recovery of Discovery” is currently on view at KW Berlin.  The work consists of cardboard boxes of beer that form the shape of a pyramid, which are available to the public to open and drink, after signing a waiver.  The show opened on March 27th, and is in a continuing state of destruction until May 22nd.

Gaillard’s work typically engages with our built environment and its landscapes.  For example, in his “Disquieting Landscapes” (2010), which was at the Wexner  Center for the Arts, Gaillard exhibited video and photographs which show the strange familiarity that buildings and their surrounds have.  In “The Recovery of Dicovery”, Gaillard’s engagement with the built environment and its destruction is more tangible.  Gaillard took hundreds of cases (72,000 bottles) of  Efes beer and constructed a large-scale pyramid.  Efes, which is related to the Latin Ephesus, is a city in Turkey where the beer is produced.  The beer was transported to Berlin and, as the installation statement says, “embodies both the concept of displacement and a tourist colonialism.”  Gaillard’s monument will complete itself through its destruction; from the opening of the installation, viewers have climbed onto the beer-box pyramid, which is easy given that the boxes form a natural step.  When opening a box, or grabbing a beer from an already box, the viewer participates in the removal of a single architectural piece of the installation, and adds to its destruction. 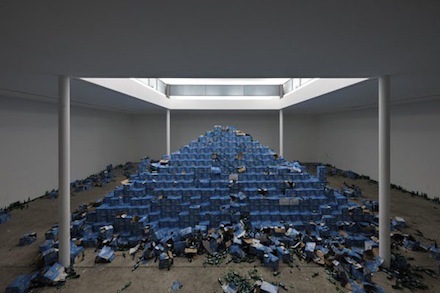 The pyramid is now dilapidated, though one can still make out its general form.  The corridor leading to the piece is lined with empty beer bottles, while the floor surrounding the former monument is covered with broken glass and half-smashed beer bottles.  Gaillard has used this type of installation before, in “Azteca” (2007) at Lausanne’s Galerie 1m3 and one wonders how big he can go.

This entry was posted on Saturday, May 14th, 2011 at 10:41 am and is filed under AO On Site, Art News. You can follow any responses to this entry through the RSS 2.0 feed. You can leave a response, or trackback from your own site.