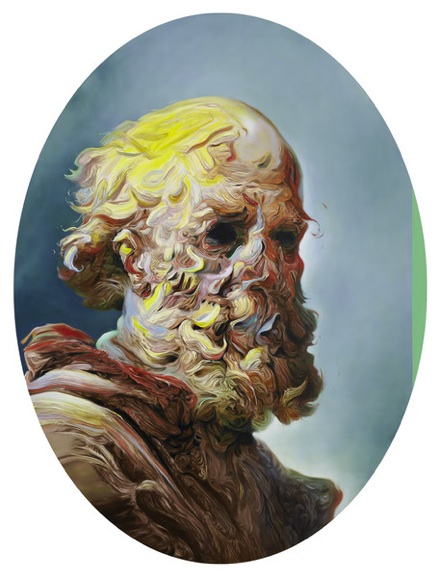 Presented through May 28, the exhibition of Glenn Brown’s recent work at Max Hetzler ’s satellite gallery presents fascinating examples of the Tuner Prize-nominated artist’s recent work. As part of Gallery Weekend Berlin, the solo exhibition is exhibiting portraiture and figurative paintings as well as “paint-sculptures” in a grandiose apartment in the chic Savigny-Platz district of Berlin. 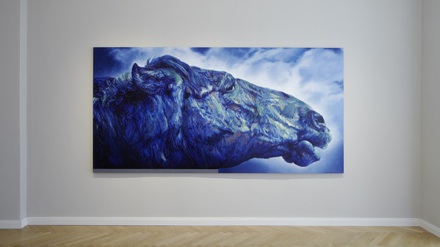 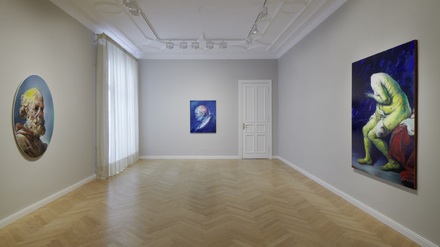 Brown’s characteristic flowing, highly detailed and hypnotic painting style, the subjects of which often reference various points of art history from the fifteenth century onwards, is evident in all the works in various degree of detail. Painstakingly rendered, they are plays on the art historical tradition which strike the viewer as both fascinating and grotesque, perplexing in their exaggerated and sinuous forms and yet inviting in their inclusion of intimate space. The figures, often quoted directly from the paintings of other artists, pose in bedrooms or traditional portrait-style and suit the private nature of the exhibition space, a large residential apartment. The strong association of Brown’s work with paintings created by old masters for private spaces lends a further sense of mystery and strangeness to the pieces. 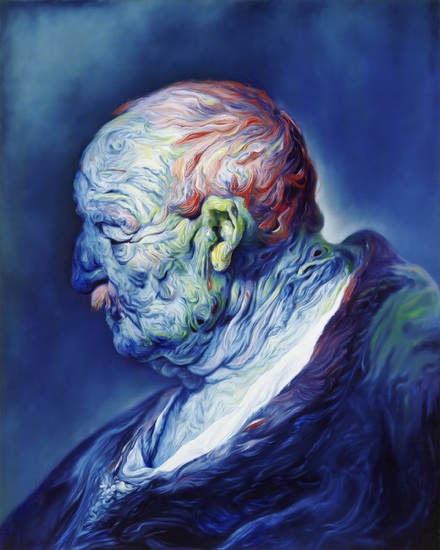 In another piece, a reference to both Rembrandt’s Susanna and the Two Elders and a John Lennon and Yoko Ono song, the sickly greeny-yellow swirls and red pustules of the woman’s body are made even more macabre by her lack of head. Leaning forwards from a blood-red divan, the figure is further emphasized by the mysterious yet intimate nature of the swirling dark blue background. The painting becomes a study of the intriguing nature of ugliness as we are both repelled by her repulsive figure and question our fascination with it. Brown expands on this theme in a series of work strongly reminiscent of portraits by old masters. Paintings such as Almond Blossom, Die Grosse Nacht im Eimer, and The Shallow End focus on central, philosopher-like figures who, through Brown’s characteristic treatment, seem strangely absent despite their lively forms. Immersed in their own thoughts, their faces and hair melt into sinuous lines that shimmer and wave, illustrating their lively innermost thoughts through the unnatural appearance of their subject. 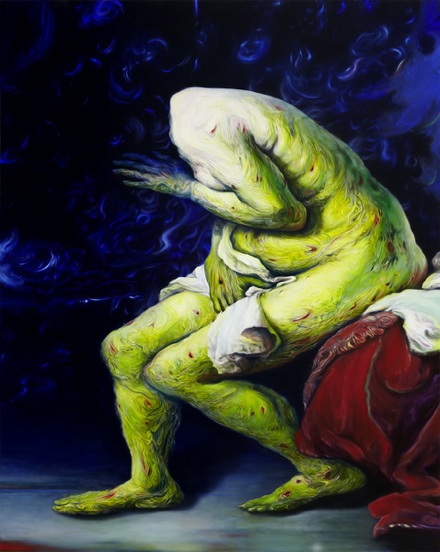 Brown’s historical references are further emphasized by his traditional use of oil on wood panel. His technique, though, is thoroughly modern. What appears at first glance to be impasto or expressionist is actually a product of trompe-l’oeil, made up of layer upon layer of very fine brushstrokes. The almost flat surfaces of his paintings are a testament to his technical virtuosity and painstaking attention to detail. The complex natures of these works attest to Brown’s artistic training and career for which he has long been recognized in the art world. Brown lives and works in London but his  paintings, for which he received a nomination for the controversial Turner Prize in 2000, have been exhibited in prestigious institutions such as the Serpentine Gallery in London (2004), the Kunsthistorisches Museum in Vienna (2008), and can be found in the collections of major museums around the world.

This entry was posted on Sunday, May 15th, 2011 at 8:03 am and is filed under Go See. You can follow any responses to this entry through the RSS 2.0 feed. You can leave a response, or trackback from your own site.