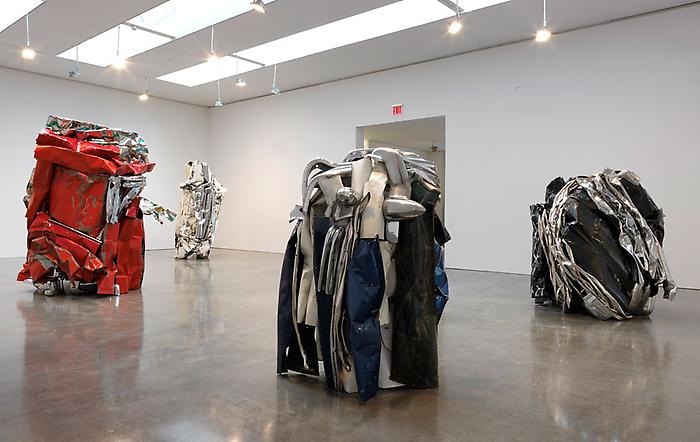 Installation view of John Chamberlain sculptures at the Gagosian, all images courtesy of the Gagosian Gallery

Gagosian‘s 24th Street location is currently exhibiting a selection of works by American sculptor John Chamberlain, in conjunction with their show in London, which closed recently. Chamberlain’s industrial-style sculptures are made up of used-car parts that he terms “art supplies,” here he continues a technique begun in the late 1950’s that results in beautiful objects that contrast with the mundane origin of their material. The two Gagosian shows are the artist’s first with the gallery following a rumored dispute over the use of a Belgian fabricator for his most recent pieces, the work was refused by former representation Pace but purchased by Gagosian for $20 million. 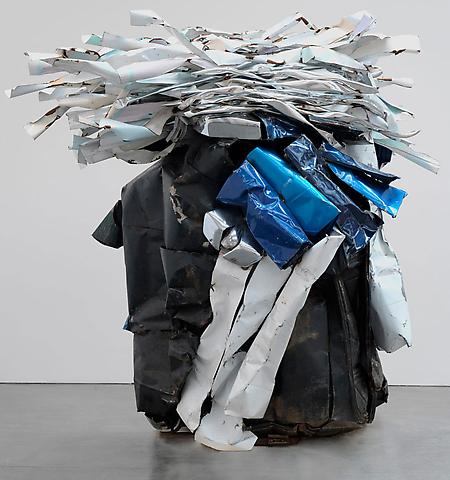 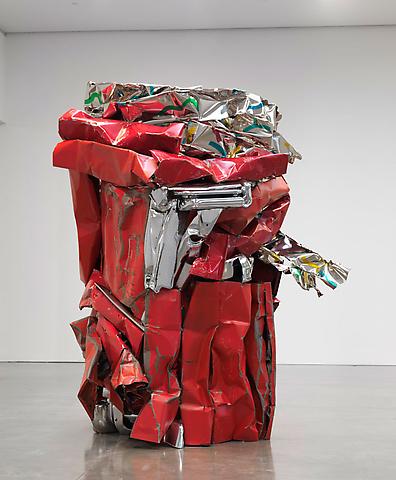 More than a dozen sculptures can be seen housed throughout the many rooms of the gallery, and hold a strong presence even among the huge spaces’ whitewashed walls and concrete floors. Despite the industrial medium, the sculptures have an organic feel to them-metals intertwine with each other become lifelike in the resurrected structures, which become emotionally charged in their powerful rips, tears, and expressions of entropy. While some are more monochromatic, many of the works emit bright bold hues (the original colors of the crushed cars), their monumental forms present as tributes to both humanity and industrialization. The moments of shining chrome reflect the viewer and the gallery, grounding the pieces in the space. 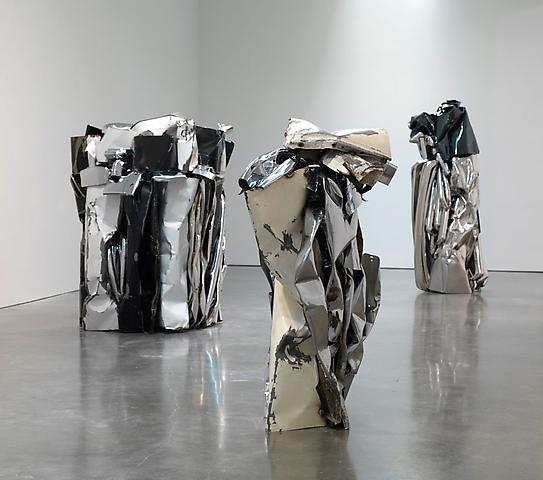 Installation view of John Chamberlain’s sculptures at the Gagosian

Chamberlain’s sculptures are created out of spontaneity rather than pre-prescribed designs as the artist responds to the intricacies of his chosen material. His work as a sculptural formulation of Abstract Expressionism- the artist is considered to have become associated with the Abstract Expressionist movement through his involvement with Black Mountain College in the mid 1950’s, and subsequently moved to New York in 1956 where he began to develop his world-renowned style of creating sculptures out of crushed steel and industrial debris. Chamberlain credits de Kooning as an early influence in his process, and this is clearly visible- notably, at some points, the sculptures become almost painterly in the distinct contrasts between the leftover finishing and matted textures. 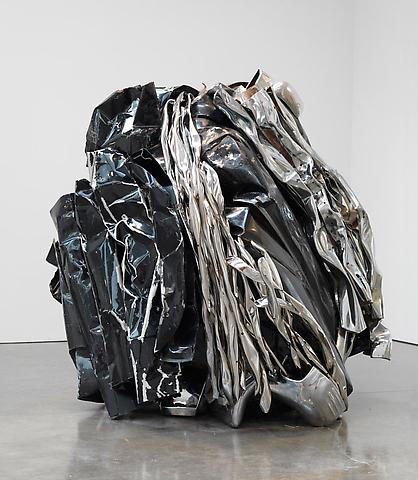 The organization and tone of the New York show is almost identical to the one that was concurrently presented at Gagosian’s London location, a one-two punch across the Atlantic.  Larry Gagosian is known for corralling the world’s most well-known (and collectible) artists, past and present, and these two shows are clearly celebrating the acquisition of such a colossal cache of work from one of the 20th century’s most influential sculptors. Chamberlain’s move was a bit of coup for Gagosian and garnered some press amongst recent gains such as the estates of both Richard Avedon and Robert Rauschenberg. The exhibition at Gagosian’s 24th street location closes on July 8th.

Education Letter March 23, 2011 Robert C. Albanese, President and CEO, Pentegra Retirement Services announced that Matthew R. Feldman, President and CEO of the Federal Home Loan Bank of Chicago, has been elected to serve on the Board of Directors of the Pentegra Defined Benefit Plan for Financial Institutions.

In making the announcement, Mr. Albanese said, “Mr. Feldman is a highly qualified choice to join our Board. His understanding of our business and broad knowledge of the banking industry will be an asset to the Pentegra organization.” The Federal Home Loan Bank of Chicago is an $88.6 billion wholesale bank, serving the needs of member housing finance institutions located in Illinois and Wisconsin. Mr. Feldman became President and CEO in April 2008. Mr. Feldman has been with the Bank since September of 2003 and has served in several executive capacities. go to site defined benefit plan

Prior to his employment with the Bank, Mr. Feldman was co-founder and Chief Executive Officer of Learning Insights, Inc. from 1995 to 2003. Mr. Feldman conceived, established, financed and directed the operations of this privately held e-learning company. go to web site defined benefit plan

Mr. Feldman holds degrees from Case Western Reserve University and the Kellogg School of Management of Northwestern University, where he is Vice Chair of the North American Kellogg Alumni Council. He also serves on the Board of Directors of the Office of Finance of the Federal Home Loan Banks and as Chair of the Human Resources and Compensation Committee. He also serves as Vice Chair of the Bank Presidents Conference of the Federal Home Loan Banks.

For more information, go to www.pentegra.com

This entry was posted on Thursday, June 30th, 2011 at 12:02 pm and is filed under Go See. You can follow any responses to this entry through the RSS 2.0 feed. You can leave a response, or trackback from your own site.