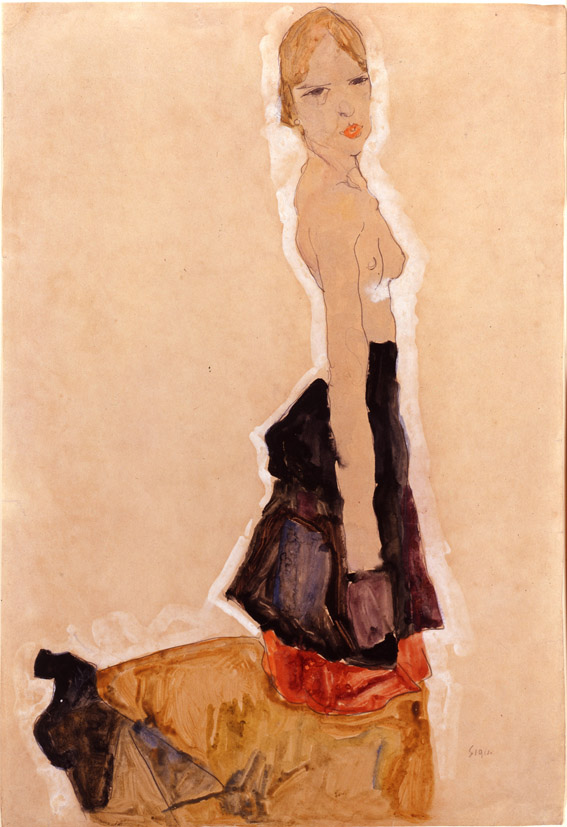 Egon Schiele, Kneeling Nude in Colored Dress (1911), via Richard Nagy Gallery
Currently on view at Richard Nagy Gallery in London is Women, an exhibition of more than 45 works by Austrian artist Egon Schiele. Renowned as one of the greatest draftsmen of the 20th century, these works are displayed for the first time in the United Kingdom and portray museum-quality drawings and watercolors from the artist’s “Mature Period” (1910- 1918). The works are intimate renderings of the women which fascinated and intrigued Schiele throughout his life. 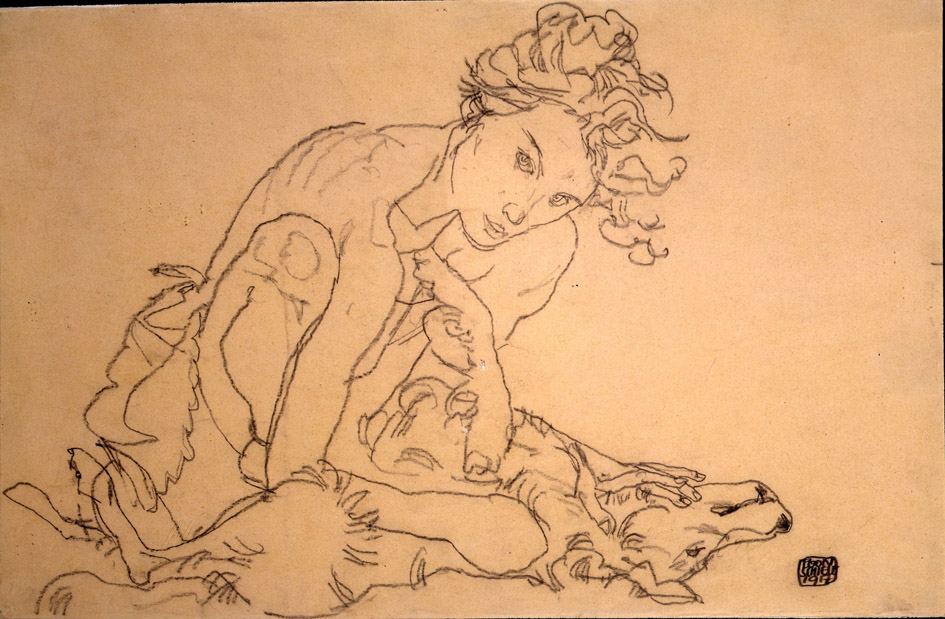 Egon Schiele’s interest in depiction of female forms began at a young age. The artist was the only son in a household of women; his earliest drawings were of his mother and sisters, including several renderings of his younger sister Gertude portrayed naked. His early nudes of young street girls exude a fascination with the erotic, yet Schiele’s work is kept from being simply provocative by his gift for scrutinizing the psychological states of the women he depicts. Through at times depicted in sensual and revealing poses, the artist captures the character of his sitter through a  masterful use of line and distortion. 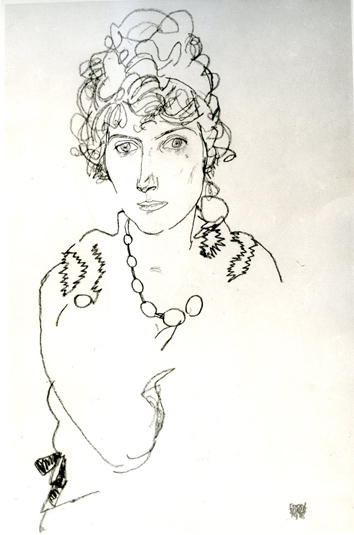 The works on display at Richard Nagy reveal the variety in Schiele’s depiction of women. In works from 1910-1911, he exhibits tension and anxiety, while in those produced during 1917- 1918 there is a calmness, perhaps as related to his artistic success at the time. Masterpieces in the exhibition include Dark Haired Girl (1910), Women with Infant (1910), Nude in Orange Stockings (1914), and Girl in Underclothes (1917). 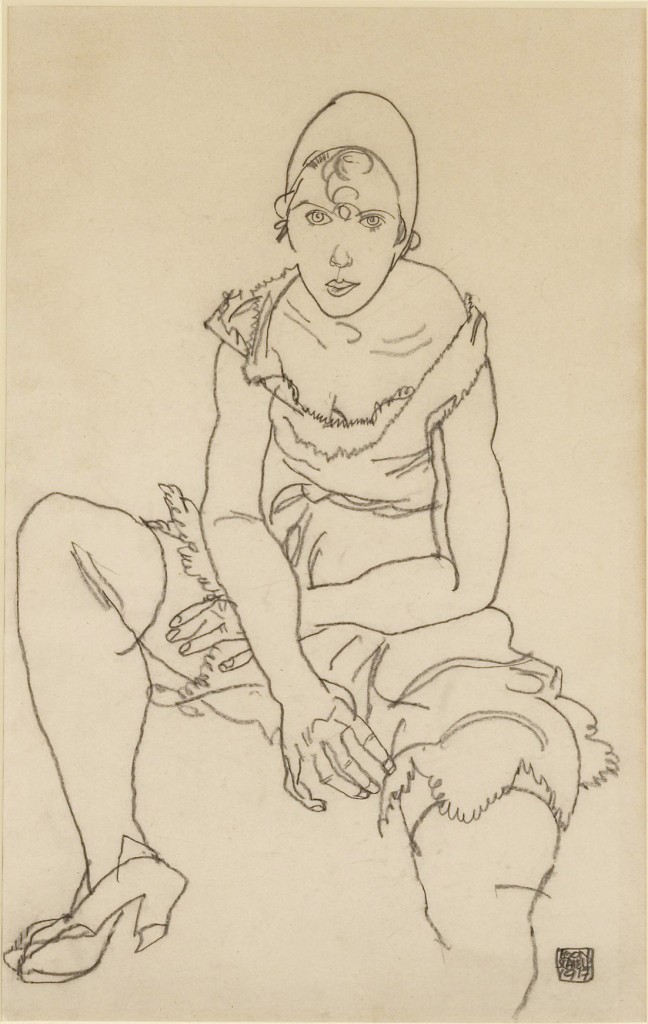 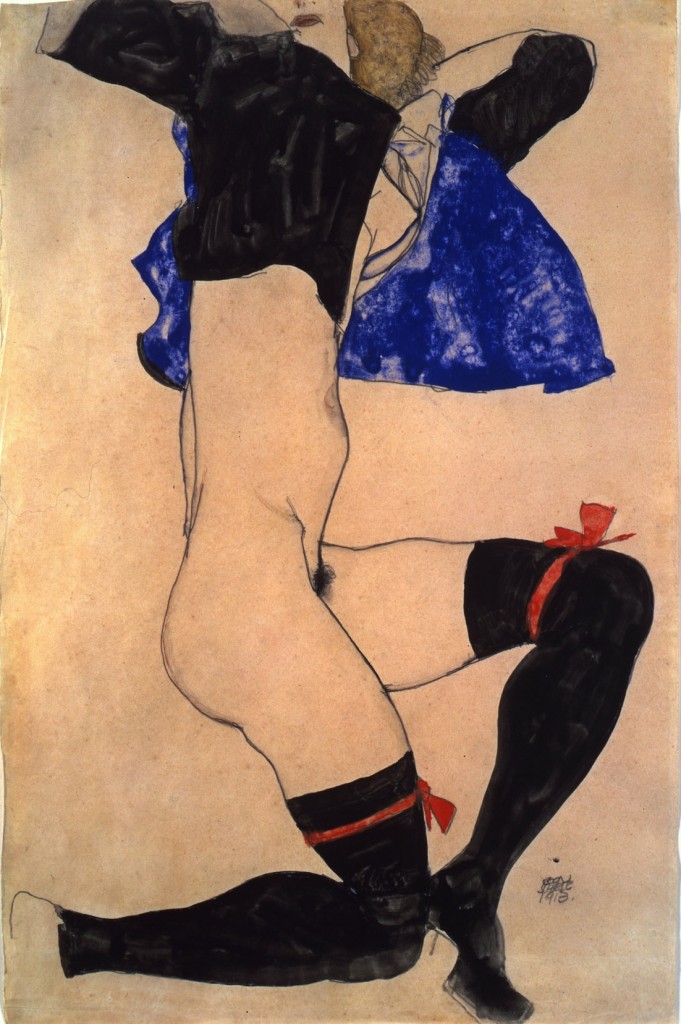 Deceased at the young age of 28, Egon Schiele produced around four thousand works throughout his short lifetime, many of which until now have only been visible in Vienna. In such a brief span of time, he became Austria’s leading artist and was soon known internationally for his intimate and psychological portrayals. 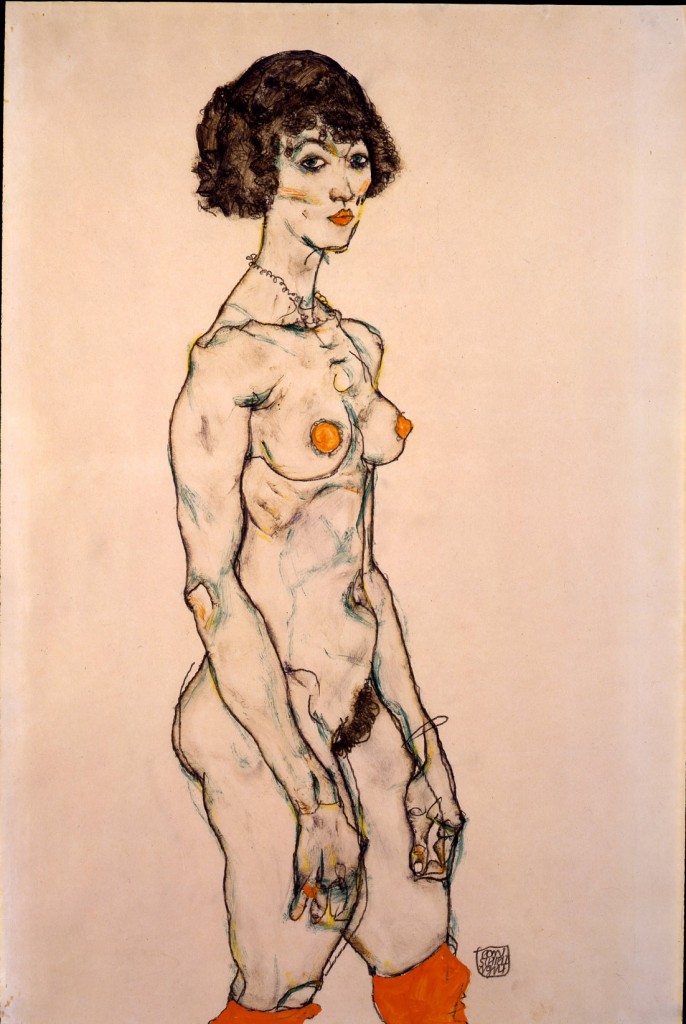 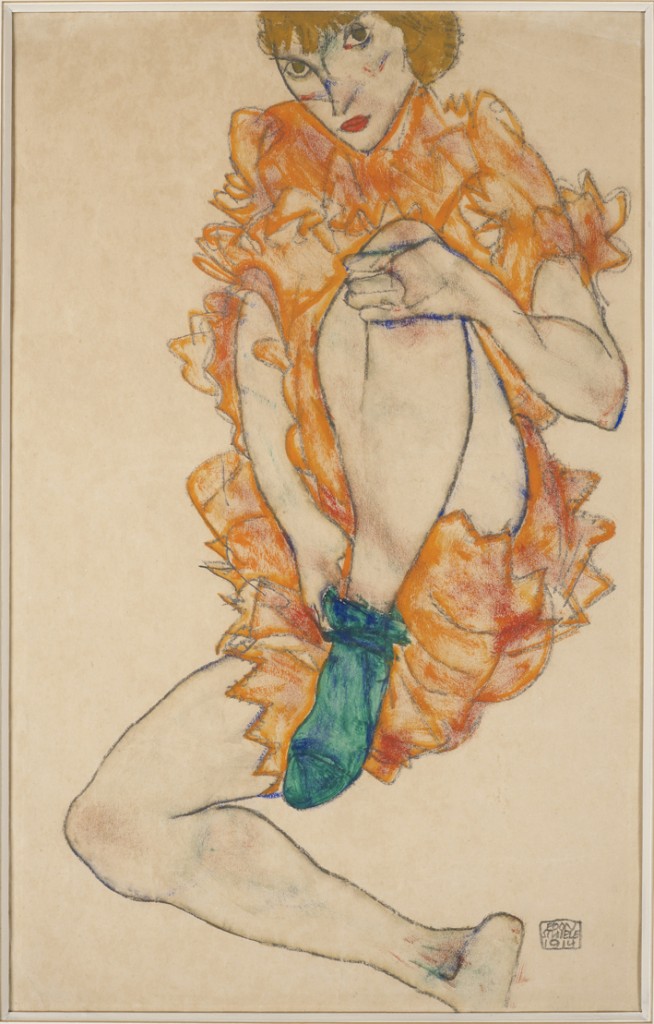 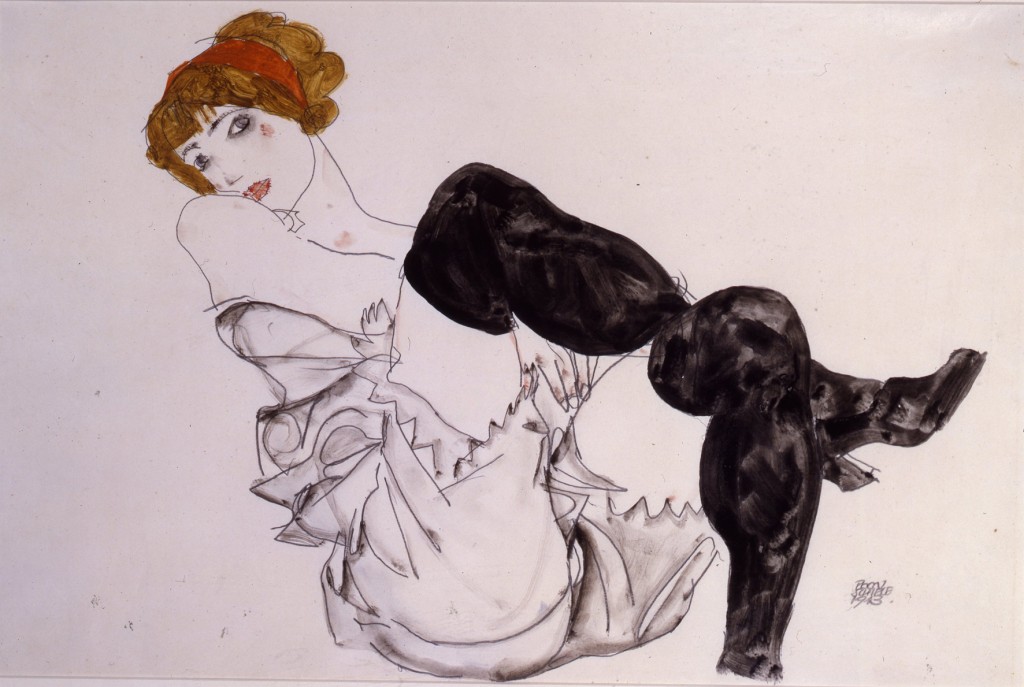 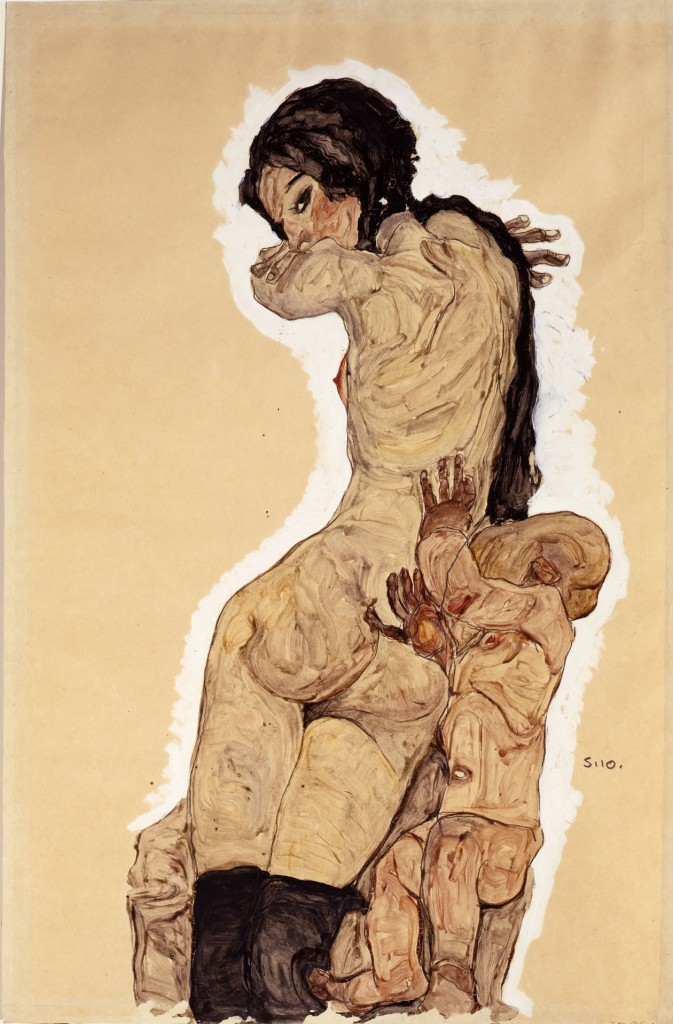 7 P.M.Adam Johnson, a teacher of creative writing at Stanford University, reads from and discusses his new novel, “The Orphan Master’s Son,” at Politics and Prose Bookstore, 5015 Connecticut Ave. NW, 202-364-1919.

31 TUESDAY | 7 P.M.Ayad Akhtar, a first-generation Pakistani American with an extensive theater background, reads from and discusses his first novel, “American Dervish,” at Politics and Prose Bookstore, 202-364-1919.

1 WEDNESDAY | Noon. The Poetry and Literature Center at the Library of Congress is celebrating the 110th birthday of Langston Hughes, the famed Harlem Renaissance poet, social activist, novelist, playwright and columnist, with a reading of his work by Dolores Kendrick, the District’s poet laureate, and Evie Schockley, a poet and assistant professor of English at Rutgers University, in the Thomas Jefferson Bldg., Whittall Pavilion, 10 First St. SE. They will also discuss the influence Hughes’s poetry has had on their work. For details, call 202-707-5394.

7 P.M. Alec Wilkinson, a writer for the New Yorker, reads from and discusses his new book, “The Ice Balloon: S. A. Andree and the Heroic Age of Arctic Exploration,” at Politics and Prose Bookstore, 202-364-1919.

7 P.M.Dylan Ratigan, host of MSNBC’s “The Dylan Ratigan Show” and a former global managing editor for corporate finance at Bloomberg News, reads from and discusses his new book, “Greedy Bastards: How We Can Stop Corporate Communists, Banksters, and Other Vampires From Sucking America Dry,” at the Sixth & I Historic Synagogue, 600 “Eye” St. NW. Tickets are $10 each or two free with purchase of the book. For details, call 202-408-3100; to RSVP, visit www.sixthandi.org.

2 THURSDAY | 11:30 A.M.Zbigniew Brzezinski, formerly President Jimmy Carter’s national security adviser and currently a professor of foreign policy at the School of Advanced International Studies at Johns Hopkins University, discusses his new book, “Strategic Vision: America and the Crisis of Global Power,” at a luncheon at the Woman’s National Democratic Club, 1526 New Hampshire Ave. NW. The event begins with a cash bar followed by lunch at 12:15 p.m. and the lecture at 1 p.m. Admission is $30 for nonmembers, $25 for members and $10 for those attending the lecture only. Visit www.democraticwoman.org to RSVP.

5 SUNDAY | 2 P.M.Diane Ackerman, an award-winning essayist, poet and naturalist, reads from and discusses her most recent book, “One Hundred Names for Love: A Stroke, a Marriage, and the Language of Healing,” at the Weinberg Center for the Arts, 20 W. Patrick St., Frederick, Md. A book signing follows; call 301-600-2828 or visit www.fcpl.org for details.

This entry was posted on Saturday, June 25th, 2011 at 6:30 pm and is filed under Go See. You can follow any responses to this entry through the RSS 2.0 feed. You can leave a response, or trackback from your own site.