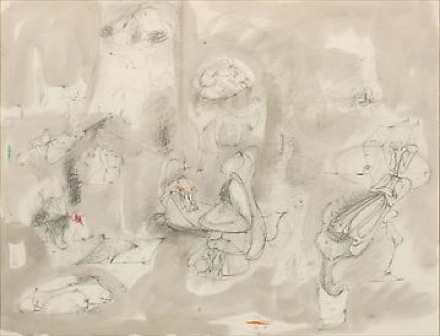 Arshile Gorky‘s ‘1947,’ currently on view at Gagosian‘s Madison Avenue location, operated around the recent discovery of a painting, Untitled (Pastoral), that was produced in this same year but has otherwise never before been exhibited. Hidden for sixty-four years, resting beneath Pastoral on the same stretcher, the work was only uncovered in 2010 during a reframing. Surrounding this new work, the exhibition also shows paintings and drawings drawn from the world’s collections of Gorky – most of which haven’t featured in New York shows for twenty years.

More text and images after the jump> 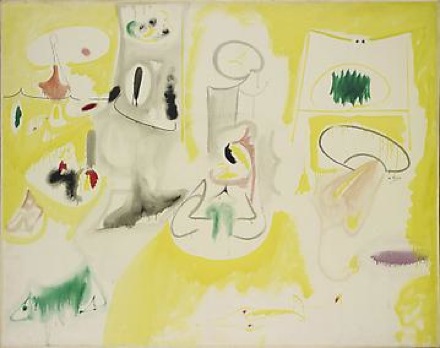 Arshile Gorky was born Vostanik Manuk Adoyen to Armenian parents, but other true facts of the artist’s life remain uncertain, such as the year of his birth, something that Gorky changed constantly throughout his life. We can surmise, however, that his artistic life began in America when he enrolled in Boston’s New School of Design. In his early twenties, the young artist mixed his classes with his own teaching; taking books on the Modern European Masters as his guides, Gorky emulated the Impressionists in his work first (’20s), Cubists (’30s) before arriving at Surrealism by the early forties. It is here that the beginnings of the artist’s prominent mark on twentieth century American art were exposed. Indeed, by 1943 Andre Breton had reviewed these surrealist works, and declared (The Liver is the Cock’sComb (1943) ) to be ‘one  of the most important paintings made in America’. 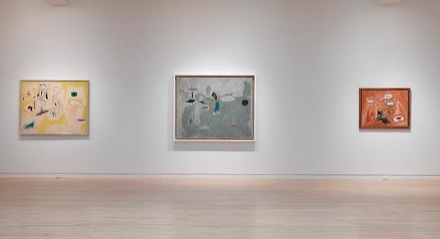 Far from a retrospective, the Gagosian‘s ‘1947’ thus indulges in these final, most prosperous years- some that were woefully cut short when Gorky hanged himself in 1948. Yet, unlike many past exhibitions that have focused on “why” he painted (much has been made of the incredible sadness that plagued Gorky’s later years- his studio burned down taking some of his works, he got cancer, he had a colostomy, his wife left taking their children with her and he suffered a broken neck from a car accident), but this time the viewer is presented instead with “how“ the works were produced. It is a compelling demonstration of Gorky’s maturely refined form, which Alfred Barr, founder-director of the Museum of Modern Art, considered his having ‘found himself’. 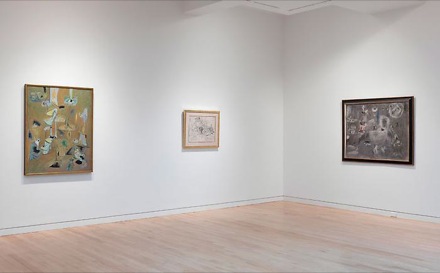 Perhaps a major factor of the new style’s evolution was Gorky’s introduction of a paint he mixed with turpentine- a combination that ensured greater freedom and expression in his form. During these last years of the decade, Gorky swapped his former hard-edged, two-dimensional, structured compositions for thinner, spider-like flowing lines and less saturated hues, seen most pertinently in The Limit (1947). 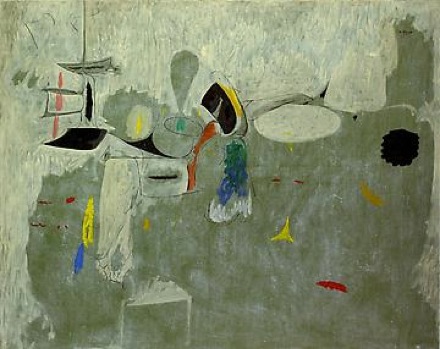 Arshile Gorky, The Limit (1947) via Gagosian

Each of the exhibition’s paintings- their nude tones and fragile, whispering lines- are all telling accounts of Gorky’s manifold and inimitable approach. Around the time of a change of paint, Gorky similarly dropped his New York environs for journeys to the countryside of Virginia. Here, he made repetitive studies of flowers and grasses using a range of media: pens, pencils, crayons and watercolours. He would later wash the drawings in the bath, hang them to dry and scrape or sand at their surface. Repeating these drawings over and over, the artist integrated his learnings from them into what became this eventual- and most masterly- personal style. ‘1947’ is Gorky as an accomplished artist. 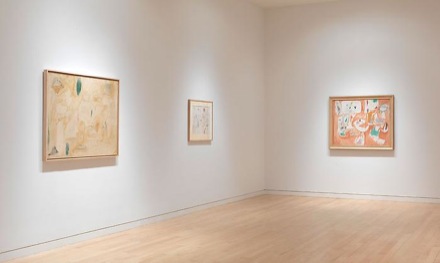 A compelling exposé of the last and most brilliant stage of Arshile Gorky’s career, ‘1947’ thus exposes a style achieved by the artist’s tireless learning, developing and experimenting with form. However they might stray from previous works, the drawings and paintings on show never stop attributing and giving reference to early Impressionism and Cubism.  What has come to rest, (and what we can savour here), is a mutual balancing of surrealism and abstraction: an overt artistic expression of a man’s otherwise agonising introspection.

This entry was posted on Sunday, June 26th, 2011 at 7:13 pm and is filed under Go See. You can follow any responses to this entry through the RSS 2.0 feed. You can leave a response, or trackback from your own site.