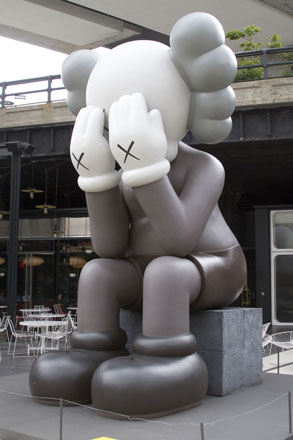 KAWS “Companion (Passing Through)” 2011  – All photos by ArtObserved

Aptly titled “Companion (Passing Through)”, the sixteen feet tall sculpture by KAWS  has relocated from the Aldrich Contemporary Art Museum in Connecticut to the front plaza of the Standard Hotel in New York City.  Originally commissioned for the expansive Harbour Mall in Hong Kong, “Companion” is a hybrid of KAWS’s signature skull head and the body of Mickey Mouse in grayscale.  With both hands covering his face, the cartoonish figure in repose appears to be experiencing a range of negative emotions induced by his surroundings.  The specific conditions are ambiguous yet the pose speaks to the viewer with its instant familiarity and universal language of shame, humiliation, and social withdrawal. 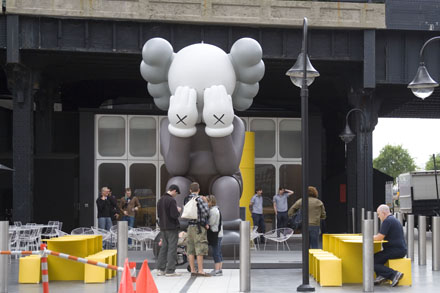 In an interview with T Magazine, KAWS, whose real name is Brian Donnelly, said the concept materialized when he arrived in Hong Kong at the original installation site.  “I was invited to do the piece, I went and saw the site. And immediately I was like, ‘God if I had to sit out here, I would just be mortified if this many people walked past me.’ And that’s how that pose came.”  Earlier this year, KAWS also produced 1000 sets of limited edition incandescent light bulbs for the Standard Hotel featuring red, purple and green filaments in the form of his trademark X’s. 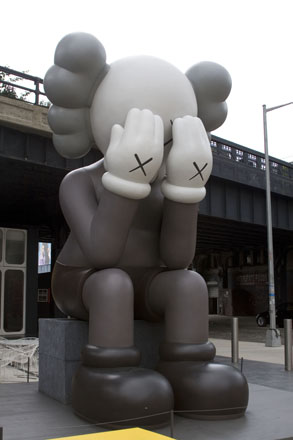 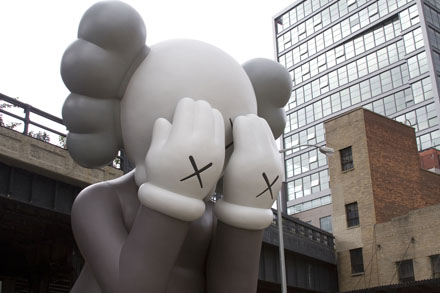 KAWS started his career as a graffiti artist in Jersey City, New Jersey and is now based in Williamsburg, Brooklyn.  His oeuvre currently includes sculptures, paintings, and toymaking.  The artist graduated from the School of Visual Arts with a BFA in Illustration and has had solo exhibitions in Los Angeles, Tokyo, Miami, and Paris.  He is represented by Honor Fraser Gallery, Los Angeles; Gering & López Gallery, New York; and Galería Javier López, Madrid. 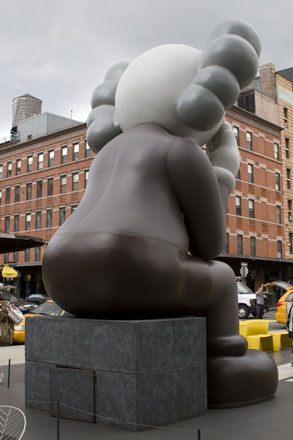 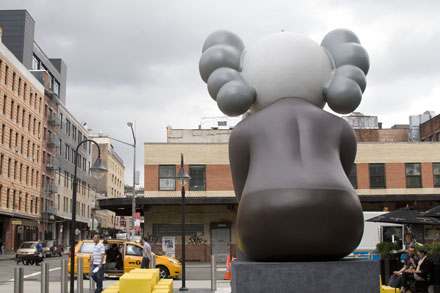 The Herald August 17, 2005 A 2000-YEAR-OLD pan which was a souvenir of Hadrian’s Wall in Roman times is to go on display at three British museums.

The Staffordshire Moorlands Pan, found by a metal detectorist in Staffordshire in 2003, was made as both a functional vessel and as a souvenir.

Ralph Jackson, curator of the Romano-British collection at the British Museum, in London, said: “This little gem of British craftmanship, a unique find of the greatest importance, shows us Hadrian’s Wall was as famous in the Roman world as it is today.

“Visually striking and replete with fascinating information, it is a most notable acquisition for the nation.” The pan will go on display at the British Museum and will then be shown at the Potteries Museum and Art Gallery, Stoke-on-Trent, in 2006 and the Tullie House Museum and Gallery, Carlisle, in 2007. go to website hadrian s wall

The pan has been acquired by a grant from the Heritage Lottery Fund of GBP112,000 – of which GBP100,000 goes to the finders and owners of the land.

Mr Jackson said the pan could be the first and only object with aninscription which bears the words “Hadrian’s Wall” rather than just “the wall”. here hadrian s wall

It is thought to have been a souvenir belonging to a soldier – whose name, Draco, is Greek and suggests an origin in the eastern Roman empire – who had served his time at the wall.

The 94mm-diameter pan may have also marked the fact the soldier had become a Roman citizen. Soldiers were given citizenship after 25 years and it contains Hadrian’s family name, Aelius, which was often adopted under his rule.

The pan contains the inscription of four of the forts on Hadrian’s Wall: Mais (Bowness-on-Solway), Coggabata (Drumburgh), Vxelodvnvm (Stanwix) and Cammoglanna (Castlesteads). It is the first time Drumburgh has been found on a wall souvenir and the spelling of Cammoglanna was previously uncertain.

The pan was discovered by Kevin Blackburn from Uttoxeter, Staffordshire, and three friends on June 29, 2003.

This entry was posted on Friday, June 17th, 2011 at 12:57 am and is filed under Art News. You can follow any responses to this entry through the RSS 2.0 feed. You can leave a response, or trackback from your own site.