AO Breaking News – Obituary and News Summary: Cy Twombly dies at the age of 83 in Rome 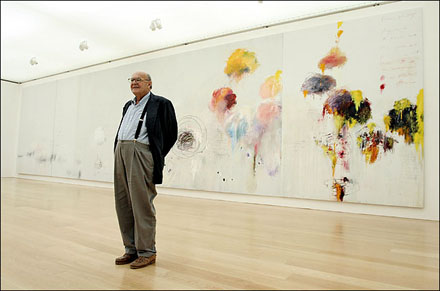 Celebrated painter Cy Twombly died today at the age of 83.  Twombly passed away from cancer in Rome, where he has been living since 1957.  Known as somewhat of a recluse, Twombly usually did not write about his work or give interviews.  One of the exceptions to this was made in 2008 when Twombly spoke to Nick Serota, director of the Tate. “I had my freedom and that was nice,” he said.

Born Edwin Parker Twombly, Jr.  in 1928 in Lexington, Virginia, and nicknamed “Cy” by his father, the artist was known for his calligraphic style. Writer, critic and assistant professor at the San Francisco Art Institute Claire Daigle writes, “Twombly arrived in Manhattan in 1950 while the New York School painting of Pollock and de Kooning was in full swing. Upon Robert Rauschenberg’s encouragement, Twombly joined him for the 1951–1952 sessions at Black Mountain College near Asheville, North Carolina – a liberal refuge [staffed by] influential teachers present at this time [such as] Charles Olson, Franz Kline, Robert Motherwell and John Cage.” In 2001, Twombly won the Golden Lion for Lifetime Achievement at the Venice Biennale. 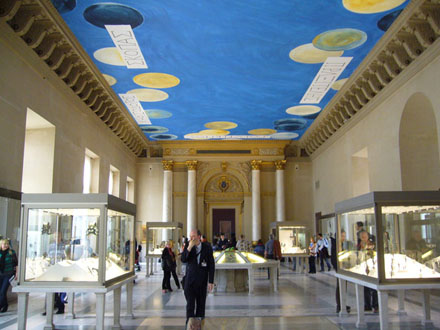 Ceiling in the Louvre. Image courtesy the NYT.

The French have particular reason to mourn the loss of Twombly; in March of 2010 the Louvre installed a ceiling painting covering 3,750 square feet in the Salle des Bronzes. The site-specific installation earned Twombly a Chevalier of the Légion d’Honneur, awarded to the painter by Mitterand in a small ceremony in 2010. French Culture Minister Frederic Mitterrand gave a statement earlier today, relating “A great American painter who deeply loved old Europe has just left us. His work was deeply marked by his passion for Greek and Roman antiquity, and its mythology, which for him was a source of bottomless inspiration.”

Twombly received big media attention in 2007 when an artist by the name of Rindy Sam gave one of Twombly’s paintings a kiss. The gesture left a red stain on Blooming, a Scattering of Blossoms and Other Things, a 9×6 ft. painting hanging at the Collection Lambert in Avignon, France. According to the AFP, the artist defended her action in poetic terms: “It was just a kiss, a loving gesture. I kissed it without thinking; I thought the artist would understand…. It was an artistic act provoked by the power of Art.” The artwork was then estimated at $2 million, and Sam was ordered to pay €1,000 to the painting’s owner, €500 to the gallery, and a symbolic €1 to the painter himself.

His gallerist, Larry Gagosian issued the following statement to Art Observed following the news: “The art world has lost a true genius and a completely original talent, and for those fortunate enough to have known him, a great human being. We will not soon see a talent of such amazing scope and intensity. Even though Cy might have been regarded as reclusive, he didn’t retreat to an ivory tower. He was happy to remain connected and live in the present. Despite his increasing fame, he never lost the playfulness and sense of humor that was his true nature and, more importantly, he retained his humility. For me personally, it is an incredibly sad day and my thoughts are with Cy’s family and close friends.””

He is survived by his son Alessandro Twombly, who followed in his father’s footsteps, becoming a painter himself. 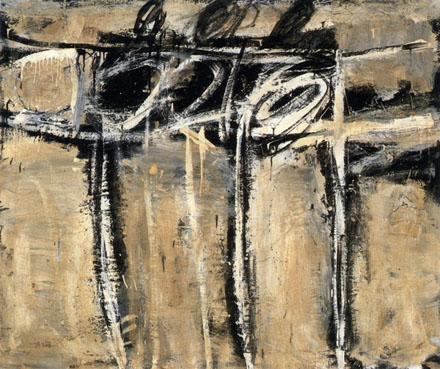 This entry was posted on Tuesday, July 5th, 2011 at 7:33 pm and is filed under Art News, Newslinks. You can follow any responses to this entry through the RSS 2.0 feed. You can leave a response, or trackback from your own site.