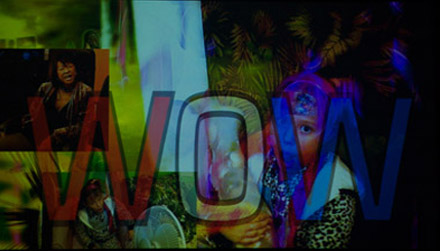 Installation view of Ryan Trecartin’s “Any Ever”. All images Ian Hassett for Art Observed.

AO was on site at MoMA’s PS1 outpost in Long Island city for the opening of Ryan Trecartin’s “Any Ever,” organized by Director Klaus Biesenbach and taking place in in the museum’s Main Gallery. “Any Ever” was also recently shown at MOCA Miami and Los Angeles’ MOCA Pacific Design Center, and presents two filmic narratives: Trill-ogy Comp (2009) and Re’Search Wait’S (2009-2010). Between the two series, there are seven crazy looped videos in all, each projected in an individual room with its own installation.
The films, which were shot in Miami and use the artist, his primary collaborator Lizzie Fitch, friends and casted actors as performers, are experiments with the visual culture and language associated with internet technology: frenzies of colors, layers and pop-ups play with techniques of low-end web design and film editing.  More than anything else, the show is experiential, while touching on themes of pop-culture, technology, identity, consumerism, gender and indulgence.  In his review of “Any Ever”,  New Yorker art critic Peter Schjeldahl says “The most consequential artist to have emerged since the nineteen-eighties, [Trecartin] is being hailed as the magus of the Internet century.” 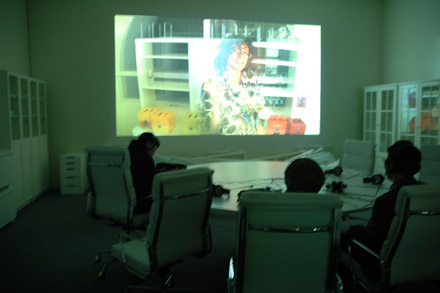 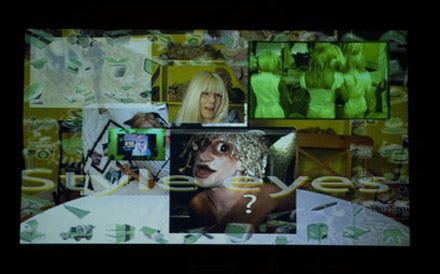 Trecartin’s show is complex and cyclical, under the guise of overstimulating and wacky. Trill-ogy Comp is made up of three movies- K-CoreaINC.K (section a), Sibling Topics (section a), and P.opular S.ky (section ish); Re’Search Wait’S is made up of four: Ready, The Rs’Search, Roamie View: History Enhancement and Temp Stop. The plotlines are explained in the press release (though in the viewing they are incredibly difficult to follow), such as that of K-CorealNC.K (section a):

“K-CorealNC.K (section a) features actors styled as corporate beings called “koreas.” Held together in a lightly allegorical cloud of reductive international stereotypes, they are homogenized by their blond wigs, powder, and office-casual attire. The video revolves around an unending party-like meeting led by Global Korea (Telfar Clemens), whose circular narrative evades a traditional dramatic arc. The Koreas seem focused only on absurd self-perpetuation, whereby the maintenance of their careers is the principal goal of  their jobs.” 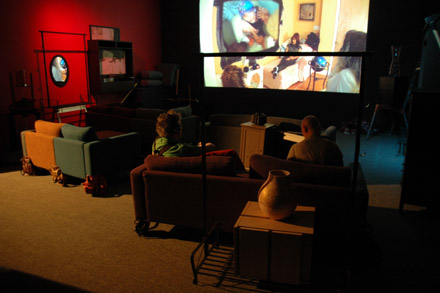 In the installations, which use elements from the sets of the films, the world of Trecartin’s films starts to seep into ours. Ambient sound effects and relaxing music mask the barrage of the films’ sound unless the viewer has “plugged in”. Otherwise, wandering the installation, the glow of the screens among an array of junky household furniture seems almost Lynchian- and in many ways, the aesthetics are similar. Despite responding to different time periods, both David Lynch and Trecartin pull from a distinctly American middle-class household: slick and laquered, but shoddy, featuring piles of disparate elements that are not entirely functional but add up to a distinctly commodifiable dreamscape- busy, but dark. 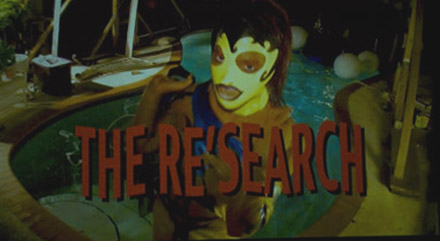 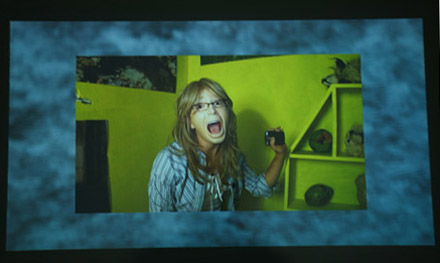 With the viewing of each film, despite the cryptic narratives, one starts to notice repeated characters and motifs, and certain themes and wordplay can be gleaned by parsing through the technological nonsense; often the characters’ lines imitate the language found in the Twitter feeds or message boards of the Deep Internet. They utter statements of new witticism such as “Refresh this Room!” or “I’m about to force you all to condense!” sometimes getting stuck on repeat, such as when we hear over and over again “I could go on but I won’t, I could go on but I won’t”, a linguistic joke typical of those that Trecartin is both sincerely fond of while being  cunningly aware of its juvenile-ness, like his attitude toward both the suburbia and chatterboxes he portrays. Trecartin explains “They’re talking to themselves; they’re talking to culture at large; they’re talking to the people in the room; and they’re talking to themselves being recorded.” 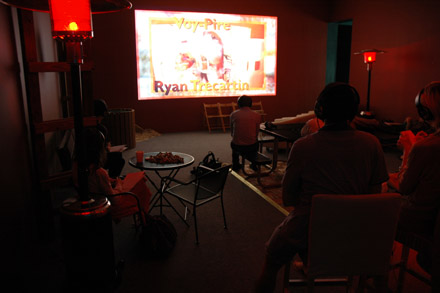 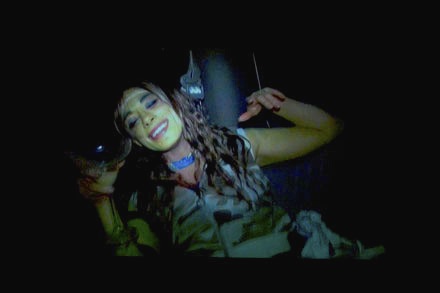 The characters’ appearance tends toward the uncanny, with heavily applied face paint, sale-rack clothes and cheap wigs. They preen each other, scramble for the most attention, presenting as a horde of likeminded fools who only understand the world as it exists through a screen. The videos are frenzied portrayals of actors cast into archetypes of the young and technologically-overdependent internet community, called “youth culture”, but it’s more than that, it’s specifically suburban American youth culture- bored teenagers with too much energy and no one to direct it towards, chatter at the camera, finding their life blood in the eyes of the Internet. Gender, sexuality, even personality are neutralized in pursuit of a greater goal- attention. Like updated versions of Warhol’s Superstars, the characters have a deeply more intimate relationship with the camera, and their prospective watchers/fans, than with the other participants in their own worlds.

Trecartin’s entrance to the art world came in 2005 with his RISD senior thesis “A Family Finds Entertainment”; later he was included in the Whitney Biennial, awarded the Wolgin Prize for Contemporary Art.  He has been hailed as a wunderkind among young artists responding to technology, perhaps because his work not only uses new media as a tool, but reflects a certain type of dispersed humanity, less as contained in the actual characters themselves than in the archetypical faceless everypeople they imitate. The work is made to resound with those who  recognize it as more than parody of overstimulation. At one point, penultimately in many ways, one of Trecartin’s characters repeatedly asks another “Is this a band or a sculpture? Is this a band or a sculpture?” until he eventually gives up and announces, “Influence Accomplished.” 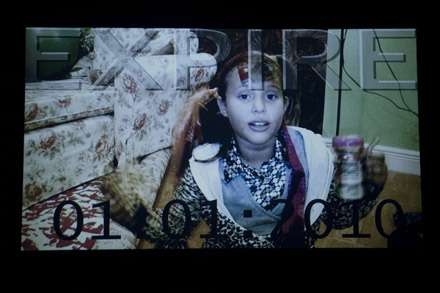 This entry was posted on Friday, July 1st, 2011 at 8:09 am and is filed under Go See. You can follow any responses to this entry through the RSS 2.0 feed. You can leave a response, or trackback from your own site.