Home » Go See – London: Dan Colen ‘Come Out Come Out Wherever you Are!’ (featuring work by Hanna Liden) at Carlson Gallery through July 31st, 2011

Go See – London: Dan Colen ‘Come Out Come Out Wherever you Are!’ (featuring work by Hanna Liden) at Carlson Gallery through July 31st, 2011 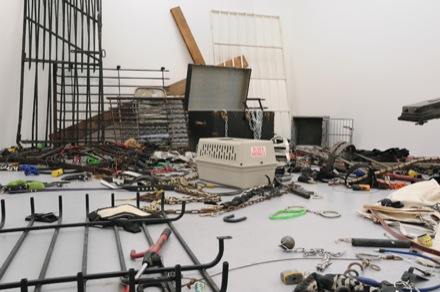 New York based artists Dan Colen is currently showing a small but wide-ranging collection of work at the intimate Carlson Gallery. ‘Come Out Come Out Wherever you Are!’  is a multifaceted selection of the artists’ sculptural and photographic work and dedicated to Dash Snow, who died from a heroin overdose in 2009. Exhibited in two conjoining rooms inside a tower block right at the heart of the city, the show’s designation as remembrance of a friend lost injects the work with a poignant endurance. The show also features work by Hanna Liden, a friend and collaborator who is also known as part of the definable group of New York based artists that have been active in the city for the past few years. The show is listed as focusing on the following themes: Religion, Kids Stuff (Death Stuff), Idols and Assholes, Bullshit Magic, Death Stuff (Kids Stuff), Heroin, Erstwhile Boners and/or a Nostalgic Fisting and Re-intarnation. 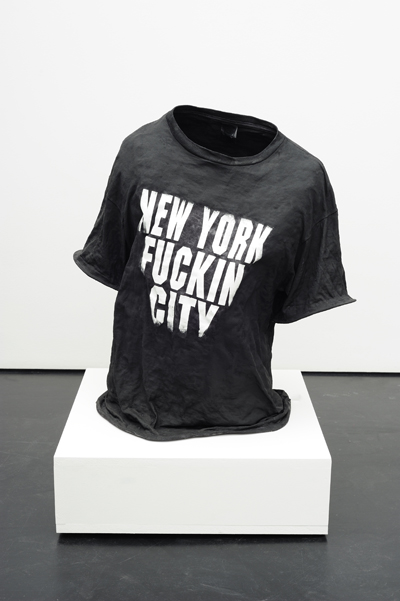 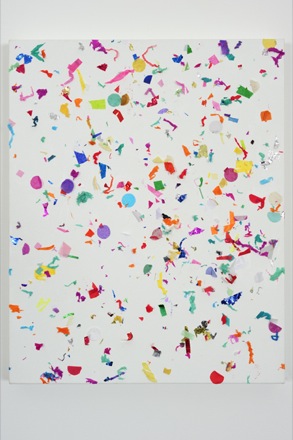 Abundant with experimentation and indulgent with media of all kinds- from tar with feathers in the richly black and moody Zip-a-Dee-Doo-Dah! (2011) to a room strewn with inanimate disused tools, plywood and metal grills then back over to confetti, this exhibition is a diverse assembly of the artist’s recent work and continues with the familiar attitudes and explorations Colen’s work is known for, such as in Good and Evil, (2011) a wall hung piece made with confetti thrown against a blank canvas.  This work picks up where Colen left off with his 2010 gum paintings- both are exploration of what can be defined as “painting.” Here, the artist examines the affect of chance on art which he says, ‘eliminates having to make decisions’. 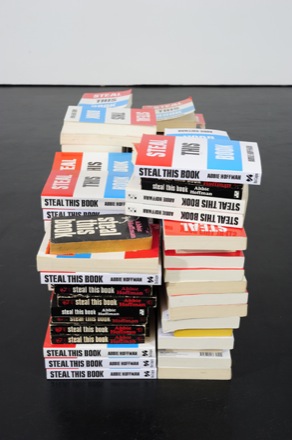 Hanna Liden joins the exhibition with a T-shirt reading ‘New York Fucking City’ and a triptych of photographic portraits covering one wall. In the corner sits a stack of Abbie Hoffmans “Steal This Book” (1971); at one point Dash Snow had left a copy of it in Colen’s studio and upon his death, Colen bought up every copy he could find and here viewer is invited to take a copy and distribute it as an expansion of Snow’s memory. 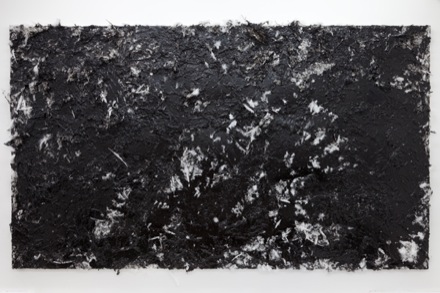 Colen’s rise to becoming an eminent subversive-underground artist has been swift. Moving to New York to start art school in 2001, Colen soon began showing work internationally.  He has exhibited globally in numerous institutions globally including the Whitney Biennial in New York, the Royal Academy in London and the Gagosian Gallery in New York.

This entry was posted on Tuesday, July 19th, 2011 at 12:45 am and is filed under Go See. You can follow any responses to this entry through the RSS 2.0 feed. You can leave a response, or trackback from your own site.