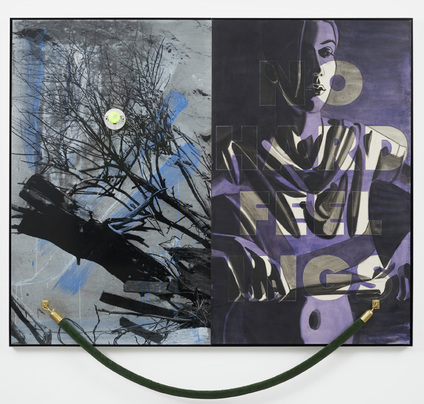 David Salle recently opened his first solo show at London’s Maureen Paley Gallery, and his first solo show in London in more than eight years.  In this exhibition the well-known and influential Salle presents a number of new paintings and older photography works.  The paintings are large in size, while the photographs are smaller; positioned in Paley’s expansive space, the works clearly display the breadth of Salle’s varied thematic and technical language. 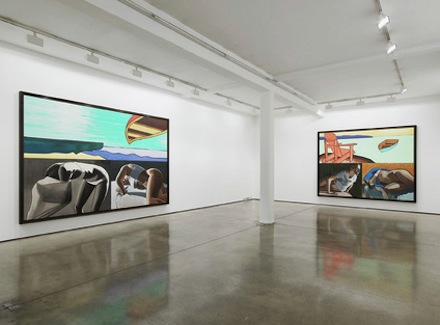 Several of Salle’s paintings combine elements of precise figuration and mixed media to create a juxtaposition of styles.  ‘No Hard Feelings’ (2011) for example, consists of two halves, one of which is a painting that exhibits the clear precision in painting that Salle is known for, with the title of the painting superimposed over an image of a women that appears to be sitting.  The second half consists of oil and silkscreen on an aluminum panel, with a lightbulb protruding about two-thirds of the way up.  Both halves are then joined by a velvet rope, the kind one might encounter at a movie theater or in front of one of the old masters. 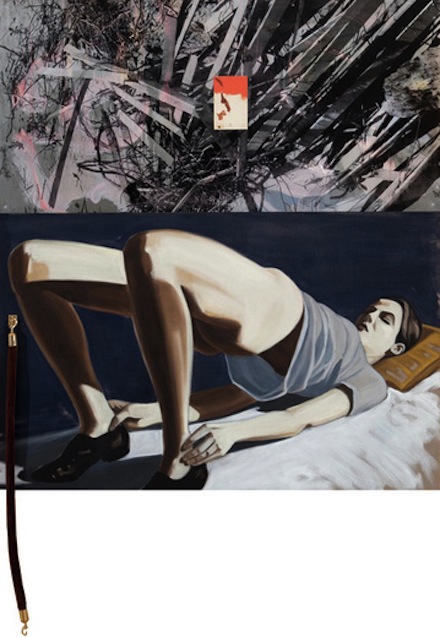 Salle uses a velvet rope and lightbulbs each in one other painting, ‘The Imagists’ (2010), and ‘I’ve Got it All Up Here’, respectively.  All of the paintings, however, are compartmentalized or multi-frame pieces.  That is, all the paintings involve more than one part.  Some have two, as those mentioned thusfar, but some have three or more parts.  ‘Large Red Chair’ (2011) for example, which is large indeed at more than 6ft. x 8ft., has the top field dominated by a large red camp chair of sorts, looking out over a lake with a floating boat.  The bottom half of the painting is divided into two parts, both of which show women in lounging positions.  In this, and the rest of Salle’s paintings, the images, which are usually of women involved in physical movement, exhibit a calm sexuality in their stark clarity.  Positioned next to the images of water, sky, boat, or some pseudo-abstract silkscreened image, the pieces present the viewer with a  reminder of just how good a post-modern artist can be. 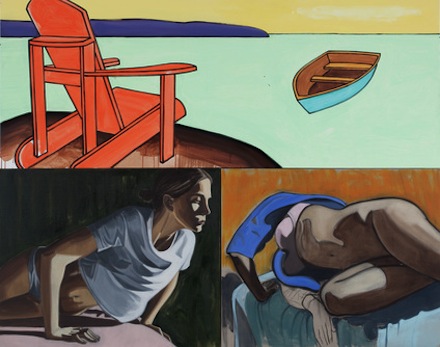 The photographs, which are not multi-part like the paintings and are all gelatin silver prints, show women engaged in some physical movement.  Again, the movements of the subjects hint at a calm sexuality, as if merely an afterthought; as in  ‘Untitled’ (1986).  Combined with the paintings, the photographs offer the viewer a chance to compare and contrast the movement of figures in painting and photography. 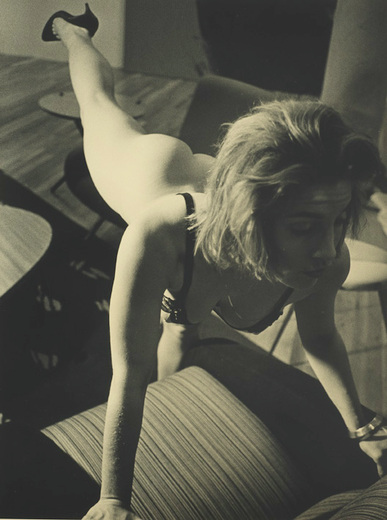 Salle has been, over his thirty year career, shown at such major institutions as the Whitney Museum of American Art, New York, the Stedelijk Museum, Amsterdam, the Haus der Kunst, Munich, and the Guggenheim Bilbao.  The exhibition lasts until July 24th.

This entry was posted on Sunday, July 10th, 2011 at 2:22 am and is filed under Go See. You can follow any responses to this entry through the RSS 2.0 feed. You can leave a response, or trackback from your own site.