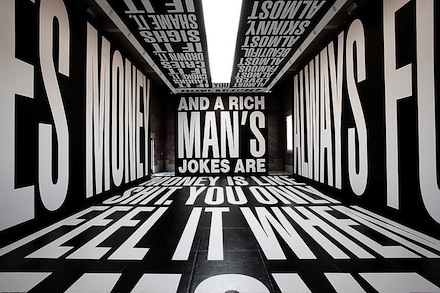 Over ten years  have passed since Barbara Kruger has had a solo exhibition in her hometown of Los Angeles. L&M Arts currently presents a long overdue show featuring the artist’s signature text “wrap” as well as a video installation. Kruger’s use of text dates back to the 1980’s when she coined such phrases as “I shop therefore I am” and “Your body is a battleground.” The L&M exhibition continues to spotlight themes of consumerism and desire, money and power. 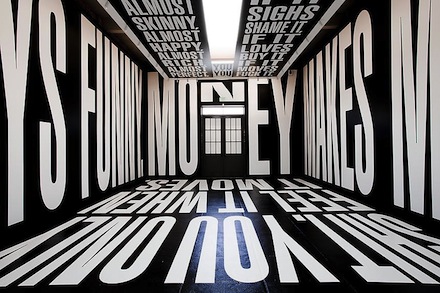 The West Gallery features massive white letters emblazoned across a black background and wrapped around the entirely of the space including walls, ceiling, and floor.  Being fully immersed by text, the viewer is forced to grapple with slogans such as “MONEY IS LIKE SHIT YOU ONLY FEEL IT WHEN IT MOVES” and “ALMOST FAMOUS, ALMOST BEAUTIFUL, ALMOST SKINNY, ALMOST HAPPY, ALMOST RICH, ALMOST PERFECT.”  The sheer size of the letters, as well as the enormity of the space they inhabit, is unavoidably confrontational. Along with presenting a stringent critique of our consumerist culture, Kruger’s work also manages to instill a degree of self-awareness to everyone who experiences the text wraps, forcing the viewer to evaluate his or her own vanities and desires. 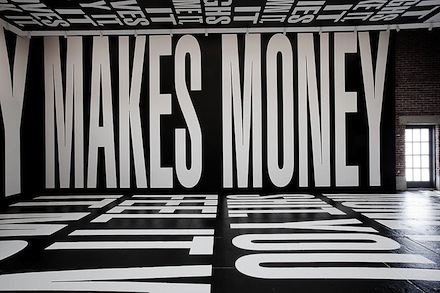 The exterior of the gallery is also part of the exhibition. Two projections, You Want It and In Violence, are visible on the brick facade at night. Images are presented and juxtaposed with text rolling across the building. The words, “IN VIOLENCE WE FORGET WHO WE ARE!”, are accompanied by images of warfare and weeping individuals. It is followed by the declaration, “YOU WANT IT. YOU BUY IT. YOU FORGET IT” which is interspersed with pictures of expensive luxury goods like cars and watches. 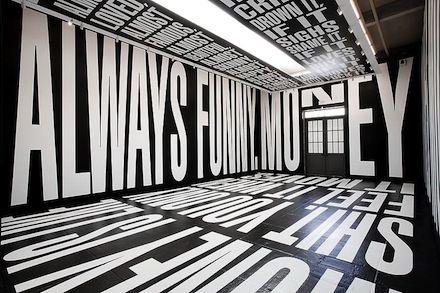 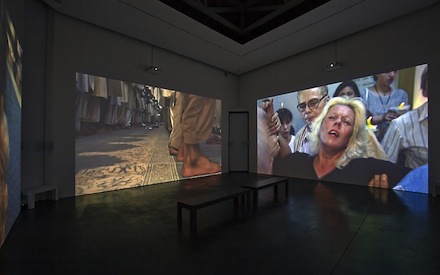 The East Gallery features, The Globe Shrinks (2010), a 13 minute multi-channel video installation. Using the four gallery walls for projections, the video cleverly creates relationships between the four walls and the action within the videos. On one wall, a women stands against a green background with her hair billowing in the wind. Directly opposite, a vintage fan appears to provide the wind fanning her hair. People tell lightbulb jokes. Muslims, Jews, and Evangelical Christians engage in religious rituals, each on their separate wall. Occasionally the room goes dark and a voice addresses the viewer, making comments like, “You’re thinking about everything you want and don’t have. I’ve got you where I want you. In the dark.” Occasionally, the images coincide with similar messages in the signature white on black text. 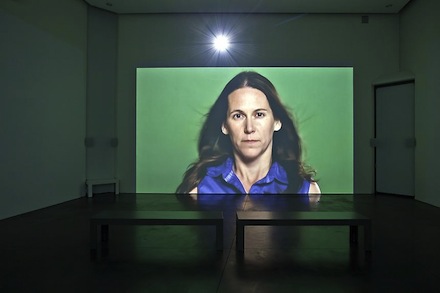 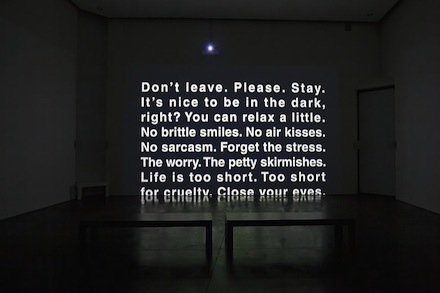 A peaceful stand against violence.(Suffolk Sun)

Correspondent IT’S BEEN just over a year since the first of two promising Lakeland High School students were shot and killed in acts of violence. And while officials are no closer than before to figuring out how to prevent such tragedies, they’re hoping that a student-driven “Be Fight Free” campaign will help.

January has been designated Violence Prevention Month by the Suffolk school division, and monthlong “Be Fight Free” rallies and other anti-violence activities have been scheduled at Lakeland, King’s Fork and Nansemond River High schools and Turlington Woods Alternative School.

Co-sponsored by the school division, Suffolk School Board, and the Community Action Coalition of Suffolk, the campaign is aimed at raising awareness among students, parents and the community to help stop teen violence.

At Lakeland High School, where students Michael C. Lee and Tyquan Lewis were killed at private parties within a year of each other , back-to-back assemblies were held recently to draw attention to the trend of teen violence. Student members on the school’s BFF Committee presented both nationwide and Lakeland statistics on violent incidents.

“An average of 15 young peopleOver the past three years, there have been nearly 200 cases of disorderly conduct, 18 assaults and 50 fights at Lakeland, said Devin Keel, 17.

1.\Make a pledge to reject violence in words, thoughts and action 2.\Bring communities together to identify the causes of violence 3.\Stand up against violence in and out of school The students used PowerPoint and other visual media to show how violence has disproportionately affected teen groups. Images captured on cell phones revealed actual fights and assaults on school property. Drama students acted out skits to show both inappropriate and proactive responses to volatile situations. in our site lakeland high school

But while different speakers stressed a critical need for change in teen culture, even those most committed to the campaign admitted that permanent change is difficult.

“It’ll change for a little while, then it’ll go back to being the same,” Williams said. The Be Fight Free message, however, would be reinforced through open dialogue and social media such as Facebook, Twitter and YouTube, he added, repeating the theme, “Anti-violence. Anti-violence. Anti-violence.” “Violence begins in the preteen years, in elementary school,” noted JaQuan Demiel, a BFF member and Lakeland varsity football and track athlete. “From this we want the high school kids to transfer the message to their younger brothers and sisters. We’re going to take this to the community.” Student leaders urged fellow students to show solidarity by signing a “Be Fight Free” pledge card and wearing buttons and wrist bands advocating anti-violence.

Follow-up activities have been planned at each of the city’s high schools throughout the month, said DeShonna Johnson, faculty coordinator of the program.

“It might be as simple as wearing school colors to show support for nonviolence,” she said.

Through February, student groups will be producing more videos and public service announcements for a citywide contest, added Johnson. Each of the participating schools also will have a representative on a citywide Be Fight Free committee to coordinate community awareness programs.

School and community leaders pledged to support the campaign, adding that its success or failure rests with the students.

“We’re willing to work with you to ensure that this initiative becomes citywide,” said Robert Stephens of the Community Action Coalition of Suffolk. “You, however, must examine the culture, make the changes and accept the idea that it’s not OK to fight.” James Thomas Jr., ttomas205@aol.com CAPTION(S):

This entry was posted on Saturday, July 2nd, 2011 at 12:01 am and is filed under Go See. You can follow any responses to this entry through the RSS 2.0 feed. You can leave a response, or trackback from your own site.