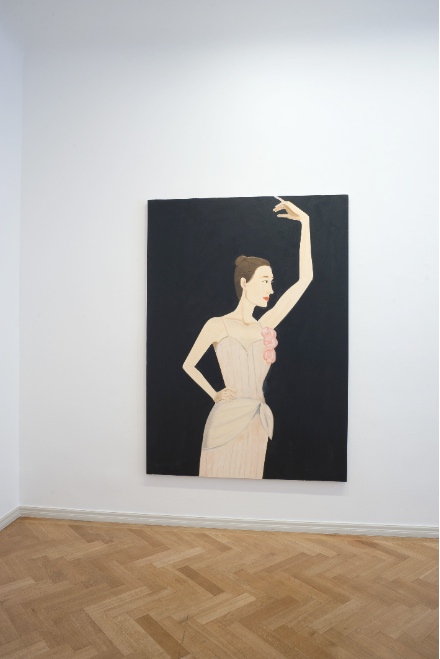 Alex Katz takes on the subject of dance in a series of paintings, drawings, and cartoons on view at Galerie Thaddaeus Ropac. The show, titled “Face the Music”, runs until July 16th and features Katz’s signature figurative style. His dancers appear to be suspended in space, each caught in the moment of practicing. The gallery notes that his work lays “somewhere on the boundary between abstraction and realism” and these traits are easily seen in the portraits of the dancers. 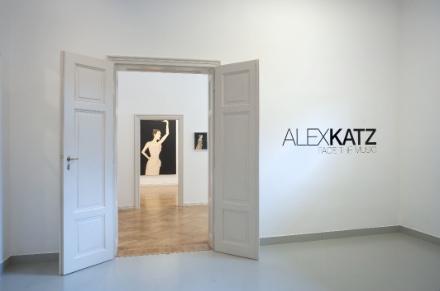 It is hard to capture motion or movement without losing the effect; the body takes on various poses, muscles can be seen working under the skin, facial expressions shift. Katz is able to pay close attention to all of these elements, working with different colors to build-up the fine lines running down a dancers neck or back. The dancers look off to the side of the canvas while holding poses, or they are fixed on a point overhead, perhaps in mid-turn. 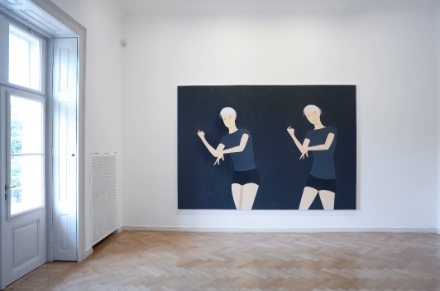 Their actions have been taken down into paint as though photographed.  Each painting features a dark—almost black—background from which the painted dancers jump out vibrantly. This helps to place all of the attention on the figure and its position. Their features are soft but firm, and Katz has captured their unique expressions. His figurative style makes the dancers seem alive and moving. 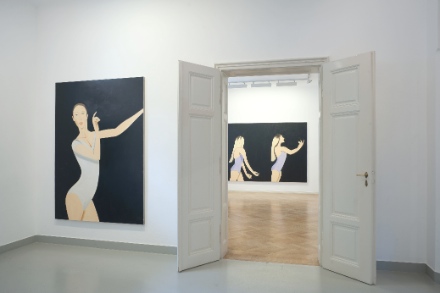 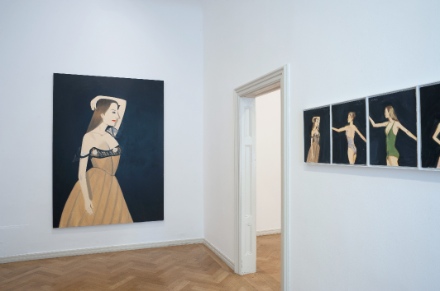 Katz, considered a Pop artist, has produced work that is simple, clean and easy to understand but still able to provoke interest. His work tends to focus on two subjects: portraits and landscapes, and reflects on the process of creation—the brush-stokes and textures of built up paint are just as important as the physical features and faces of his subjects. His work has been described as smooth and sharp, a style that he has worked to maintain through the years.

In the 1960’s, Katz created sets for the Paul Taylor Dance Company. This partnership lead him to paint portraits of company dancers and their formations during routines. Katz returned to painting dancers in 2010, now turning his attention to the New York dance scene.

Global Warming Focus April 25, 2011 Kohl’s Department Stores (NYSE: KSS) announced that the company will be recognized as a 2011 ENERGY STAR Partner of the Year for the second consecutive year at the ENERGY STAR Awards ceremony held tonight in Washington, D.C. Given by the U.S. Environmental Protection Agency (EPA) and U.S. Department of Energy, the Partner of the Year Award recognizes Kohl’s contributions to protecting the environment through energy efficiency initiatives.

“Kohl’s continuously strives to reduce our greenhouse gas emissions and energy costs while maintaining a shopping environment that is comfortable for our customers,” said Ken Bonning, Kohl’s executive vice president of store planning and logistics. “Accomplishing this takes partnership and commitment across all areas of the organization from our corporate office and distribution centers to our more than 1,000 stores nationwide. We’re pleased to report that more than 50 percent of our stores have earned the ENERGY STAR label in recognition of their diligent efforts to assess and reduce energy use, and that the number of labeled locations continues to grow.” To date, Kohl’s has more than 600 ENERGY STAR-labeled locations – more than any other department store. According to EPA, on average, commercial buildings that earn the ENERGY STAR label use 35 percent less energy and generate one-third less carbon dioxide than similar buildings. By making energy management a key focus in the company’s comprehensive sustainability strategy, Kohl’s saved enough energy in 2010 to power more than 11,500 average American households for one year. After improving energy efficiency by more than 20 percent across stores over the last four years, Kohl’s aims to increase energy efficiency by an additional four percent across its portfolio of stores in 2011. go to web site kohls coupon codes

Kohl’s has been a member of ENERGY STAR since 1998 and utilizes the ENERGY STAR portfolio manager to track energy performance of all facilities, expand use of best practices and review areas to enhance energy performance. Kohl’s began installing building automation control systems as early as 1982 and today operates all locations via a centralized energy management system that controls most interior and exterior lighting, heating and cooling. Kohl’s is also North America’s largest retail host of solar power with more than 100 solar locations in eight states, including California, Wisconsin, Connecticut, New Jersey, Maryland, Oregon, Colorado and Pennsylvania. Additional energy management initiatives include close partnership with electric utility representatives at stores nationwide, office equipment upgrades and continued investments in high-efficiency lighting, as well as in occupancy sensors and variable frequency drives to help regulate energy consumption.

Additional information about Kohl’s sustainability initiatives, including environmentally responsible building design and operation, stakeholder engagement and waste and emission reduction is available at www.Kohls.com/Cares. For more information on the ENERGY STAR program, visit www.energystar.gov. About Kohl’s Department Stores Based in Menomonee Falls, Wis., Kohl’s (NYSE: KSS) is a family-focused, value-oriented specialty department store offering moderately priced, exclusive and national brand apparel, shoes, accessories, beauty and home products in an exciting shopping environment. With a commitment to environmental leadership, Kohl’s operates 1,097 stores in 49 states. In support of the communities it serves, Kohl’s has raised more than $180 million for children’s initiatives nationwide through its Kohl’s Cares[R] cause merchandise program, which operates under Kohl’s Cares, LLC, a wholly-owned subsidiary of Kohl’s Department Stores, Inc. For a list of store locations and information, or for the added convenience of shopping online, visit www.Kohls.com.

This entry was posted on Saturday, July 9th, 2011 at 9:00 pm and is filed under Go See. You can follow any responses to this entry through the RSS 2.0 feed. You can leave a response, or trackback from your own site.