Go See – Zurich: “Vignettes of Life” by Rodney Graham at Hauser and Wirth through July 30th 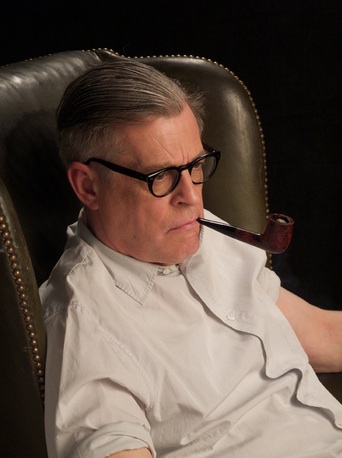 Rodney Graham, The Green Cinematograph (2011), via Hauser and Wirth
Currently on view at Hauser and Wirth is Vignettes of Life, an exhibition of major new works by Canadian artist Rodney Graham.  Featuring three new monumental light boxes and one film, the artist disguises himself as a series a motley characters and thus fuses with various art forms, genres and personae.  Graham is known for examining the complexities of Western culture by artistically appropriating certain subject matter working with such diverse media as photography, film, installation, music and text.

Rodney Graham, The Green Cinematopgraph (2010), via Hauser and Wirth 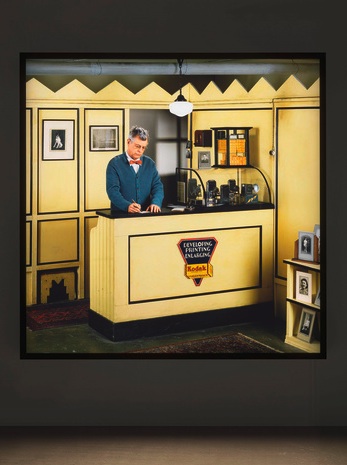 The Green Cinematograph (Programme 1: Pipe smoker and overflowing sink) is a film which test the Kuleshov Effect, an editing technique which causes the viewer to create a connection between two different scenes. The piece is shown using an old cinematograph and reverts between images of the artist smoking a pipe and bubbles been filled into a sink. The metaphorical meanings of such actions are many and are left to the spectator for interpretation. 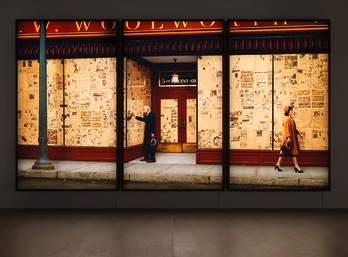 Graham’s new monumental lightboxes include The Avid Reader, Basement Camera Shop circa 1937, and the Leaping Hermit. In The Avid Reader, Graham recreates the shop storefront of a closed Woolworths in 1949. The shop’s windows are covered in newspaper clippings dating to 1945 while the artist takes the role of the avid reader standing outside and transfixed on the reading the newspaper headlines. In order to create such an image, the artist recreated the scene on a present-day street and then acted within it.

Basement Camera Shop circa 1937 is a reconstruction of a snapshot from the 1930s. Graham first saw the snapshot in an antique store. It depicts a photolab in Dauphin, Manitoba. The snapshot, which Graham first saw in an antique store, shows a photolab in Dauphin, Manitoba. The artist used the information carried in the small black and white contact print in order to create a work about the development of early snapshot photography.

We see a bearded seemingly free-spirited Bohemian Graham in The Leaping Hermit caught in mid-air as he jumps with joy. The three-part format of this work recalls a medieval triptych painting. The surrounding garden landscape and composition seem to evoke Hieronymus Bosch’s Adoration of the Magi while the pose of the hermit might even refer to Matthias Grünewald’s resurrected Christ. Yet like so many other of Graham’s work laden with various historical and present-day symbolism, the image ultimately defies interpretation.

These new interestingly capture Graham’s constant theme of personal reinvention in order to take command of a scene, play with it and give it new meaning. As the artist states, “It may be a burden to reinvent oneself every time, but it makes things more interesting.”

This entry was posted on Monday, July 25th, 2011 at 3:35 am and is filed under Go See. You can follow any responses to this entry through the RSS 2.0 feed. You can leave a response, or trackback from your own site.