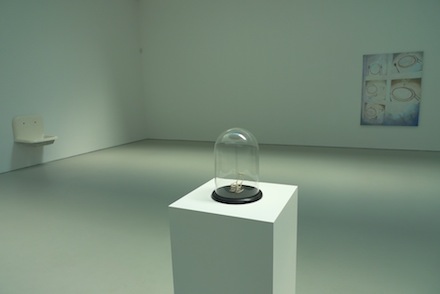 David Zwirner‘s summer exhibition, The House Without the Door, makes a curatorial departure from Emily Dickinson’s poem of a similar name. The works center around themes of interiority and domesticity, alluding to both the poet’s reclusive personality and her writing’s exploration of issues stemming from such a lifestyle, which moved past memories and objects towards intense introspection and deep-seated feelings of anxiety and trauma. 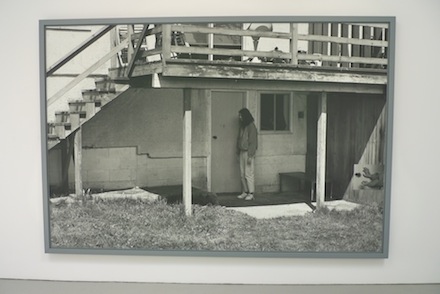 Rear, 304 E. 25th Ave., May 20, 1997, 1.14 & 1.17 pm, by Jeff Wall, is a large-scale photograph that comes close to actual-size. It depicts an addict outside the rear entrance to a house in decay; less noticeable is the photo overlay in the lower-right corner showing a drug deal. The work reveals simultaneously the locus of desire and its entropic effects. The home is presented here as a site of stark realism. 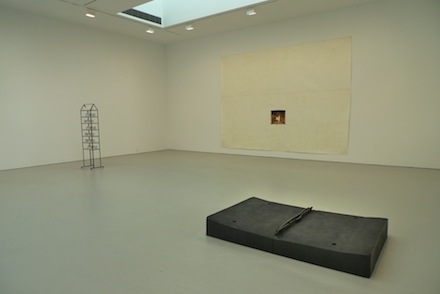 Toba Khedoori’s Untitled (White Fireplace) is a massive work on paper that places a life-size representation of its namesake subject on a broad white plane. Its dislocation from a proper setting incurs a disorienting sensation, but furthermore promotes the fireplace as a fetishized object of warmth and rootedness–qualities that remain markedly unfulfilled during the viewer’s nostalgic glance. 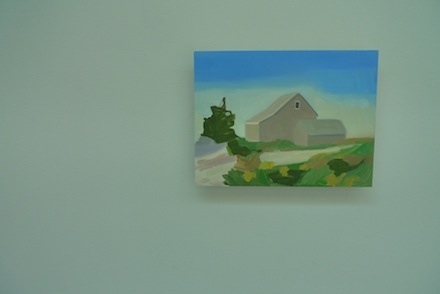 A clear connection to Dickinson’s poem is made with Maureen Gallace‘s Summer House/Dunes, an oil-on-panel work depicting a countryside house lacking any windows, save a single rafter vent. The opening line of Dickinson’s poem tells, “Doom is the House without the Door”– while this latter reference constructs a foreboding restricted interior, Gallace’s painting references the impenetrability of an otherwise idyllic space. 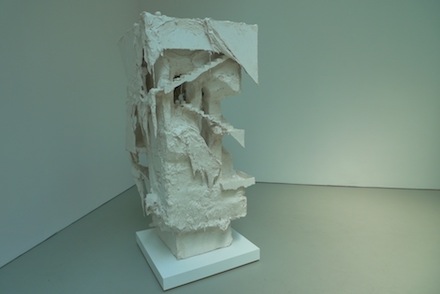 David Zwirner’s exhibition takes a more or less strict approach to correlating its selection with Dickinson’s poem, but other connections are also apparent. The “doom” of a place without openings or potential outlets is contrasted with Robert Gober‘s Untitled. The sculpture, transformed from a kitchen sink to a sculptural, glossy art object represents an artistic opportunity stemming from something previously mundane. Another selection posits how complicated the notion of a home has become. Francis Alÿs‘s Déjà vu consists of two paintings that almost identically depict an empty bedroom. Not only is it significant to consider how the artist’s own migrational history relates to one’s sense of a home, but it is also clear how the works illustrate the duplicity of changing dwellings and the accompanying impossibility of unified nostalgia.
The House Without the Door includes works by Abel Abdessemed, David Altmejd, Francis Alÿs, Mamma Andersson, Louise Bourgeois, Michael Brown, Philip-Lorca diCorcia, Maureen Gallace, Isa Genzken, Robert Gober, Mona Hatoum, Toba Khedoori, Charles LeDray, Thomas Ruff, Gregor Schneider, Luc Tuymans, Jeff Wall, and Rachel Whiteread. The exhibition closes August 5.

This entry was posted on Thursday, August 4th, 2011 at 12:03 am and is filed under Go See. You can follow any responses to this entry through the RSS 2.0 feed. You can leave a response, or trackback from your own site.