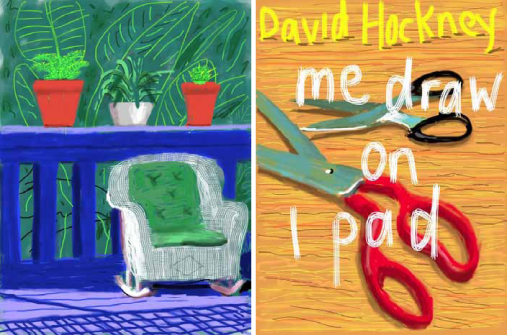 David Hockney, composite from “Me Draw on iPad” (2010), all Hockney images are via the Louisiana Museum

On view at Denmark’s Louisiana Museum is “Me Draw on iPad” featuring several hundred of David Hockney’s most recent drawings. Created on his iPhone and iPad using the Brushes application, these drawings make clear both Hockney’s characteristic whimsy and  dedication to exploration of new creative methods and media. Curated by Charlie Scheips, “Me Draw on iPad” is on view through August 28th 2011. 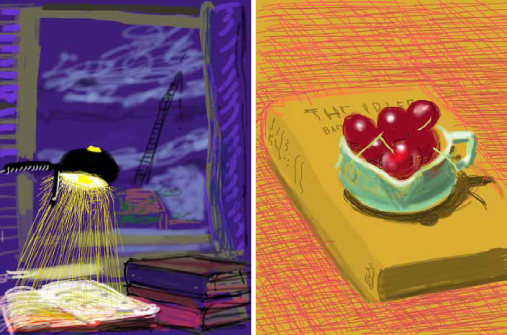 Many of the drawings exhibited are of flowers in vases: sunflowers, lilies, white roses… Yet despite similar compositions and the lack of titles, Hockney’s use of vibrant colors and various paintbrush tools makes each image individual, and entire backstories can be imagined from small details. Certain drawings more clearly demonstrate Hockney’s painterly training. The pears in Untitled, 11 January 2011 exhibit chiaroscuro modeling, shaded to appear to be three-dimensional. The composition – a still-life with bowl and fruit – pays homage to the history of painting and the fine arts but in a new, contemporary medium. In fact, his pears are somewhat comparable to the fruit painted by Paul Cezanne in Still Life with a Ginger Jar and Eggplants from 18933-94. 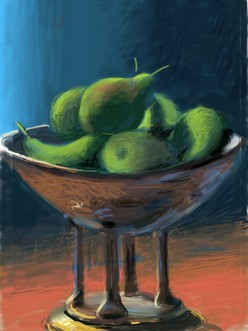 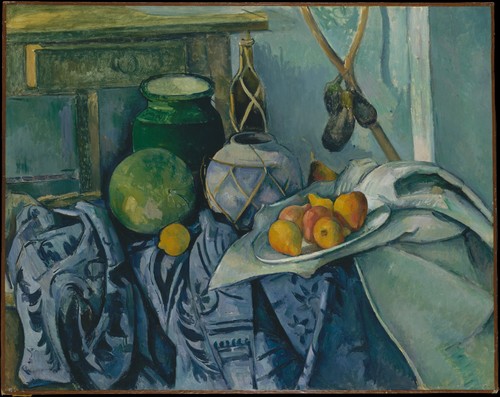 Paul Cezanne, Still Life with Ginger Jar and Eggplants (1893-1894), via The Metropolitan Museum of Art

In a different vein than many of the still-lifes is Hockney’s Untitled 2010. The portrait of a man in a suit with a seemingly old-fashioned collar, his blue eyes stare intensely at the viewer, is rendered almost life-like. Hockney has managed to create a naturalistic skin-tone, blending pinks, whites, and browns to form the face, and although it is evident that the image is not a traditional painting, Hockney has explored the media available with Brushes’ tools to make the image seem almost identical to a work using the more traditional technique of pastels. 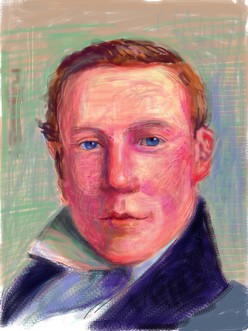 The drawings are displayed on over forty iPads and iPods hung in one gallery- periodically the images shift. In addition, one iPad shows the process of drawing: as colors appear and disappear while the artist hatches, shades, and erases using the various Brushes tools, viewers are given a rare glimpse into Hockney’s every decision and methodology. The exhibition not only pays homage to Hockney’s talents as an artist, but also plays with the potentiality of new media in relation to artistic tradition. “Me Draw on iPad” is on display at the Louisiana Museum in Humlebæk, Denmark through August 28th, 2011.

This entry was posted on Wednesday, August 17th, 2011 at 2:32 am and is filed under Go See. You can follow any responses to this entry through the RSS 2.0 feed. You can leave a response, or trackback from your own site.