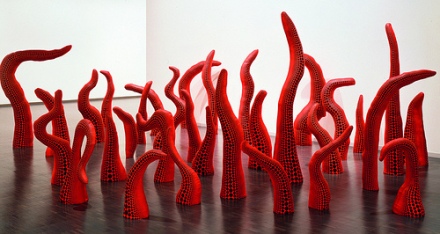 A major retrospective of Japanese artist Yayoi Kusama (born 1929) is on view at Museo Reina Sofía in Madrid until September 12th, 2011. The exhibition assembles Kusama’s multimedia projects and includes drawings, paintings, collages, installation, performance, literary, and design pieces. Organized by the Museo Reina Sofía and the Tate Modern, the exhibition explores the relationship between art and the socio-cultural reality in the past 50 years as reflected through Kusama’s work. Since the late 1950’s, Kusama has been associated with pop, first generation feminist art, minimalism, happenings, conceptual and installation art. Her work addresses and reveals the mental health issues the artist has experienced since the late 1970’s, visible through her “use of repetition, monochrome, and grids.”  However, as the curator Frances Morris reminds, “we need to balance the obvious framework of her mental health with the framework of art history and cultural milieu in which she operated over time.” Already shown in the Pompidou Centre, Paris at the beginning of 2011, this one-artist retrospective will travel to the Tate Modern, London in February 2012 and the Whitney Museum, New York in June 2012.  The exhibition traces Kusama’s artistic development through a number of periods. 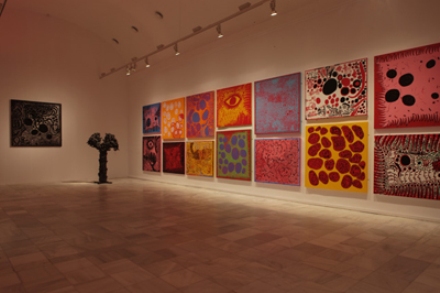 Pop art in the 1960’s aimed to “integrate arts with life” by adopting imagery from consumer society and mass media culture. In a considerable number of projects, Kusama used a cheerful polka dot pattern usually associated with the clothing industry. Fashion designers often return to the vintage polka dots “to lure budget-conscious consumers back to buying clothes” evoking times of optimism and prosperity. Kusama covers the interior and exterior surfaces, people, and objects with polka dots, commenting on notions of joy and optimism in every-day life. 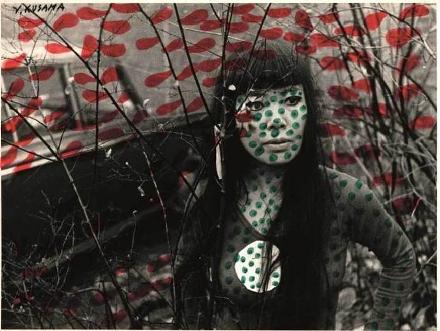 The first generation feminist artists in the 1960’s and the 1970’s explored the concept of womanhood and the way art could help break the stereotypes linked to femininity. Frequently associated with this stream, Kusama covered recognizable every-day objects, such as furniture, with phallus-like endings offering her own interpretation of gender roles and human sexuality. 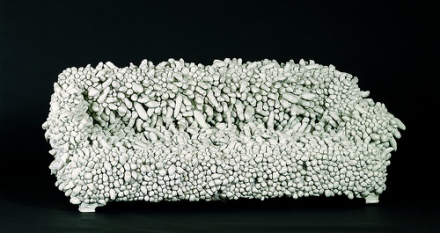 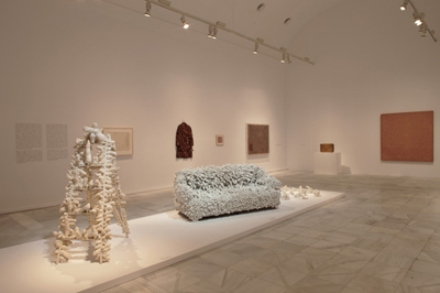 The idea of integration of art and life was not reflected only through Kusama’s art. The  Museo Reina Sofía organized the public presentation of this exhibition as a part of the larger museum activity named “Encuentros,” which ensures the public participation in the Museum’s work. On May 11, 2011 the public was invited to discuss the concept of the exhibition in relation to Kusama’s career with the curator Frances Morris.

THIS ELECTRONIC VERSION MAY DIFFER SLIGHTLY FROM PRINTED …

Post-Tribune (IN) March 25, 2007 THIS ELECTRONIC VERSION MAY DIFFER SLIGHTLY FROM PRINTED VERSION Front-loading washers may have water leaks About 250,000 Maytag-brand and about 20,000 Samsung-brand front-loading washing machines, manufactured by Samsung Electronics Co. of South Korea and distributed by Maytag Corp. and Samsung Electronics America Inc., are being recalled because water leakage onto the electrical connections to the thermal sensors could cause an electrical short and ignite the circuit board.

Samsung has received one report involving circuit boards igniting. No injuries, fires or property damage outside the washing machine have been reported.

Department and appliance stores nationwide sold the washers from April 2005 through August 2006.

The recalled “Oyster Bay” model wall sconces have multicolored glass with a black outline. The model number is on the packaging.

Home Decorators Collection stores nationwide and www.homedecorators.com sold the product from December 2004 through January 2007. Consumers can contact the company to receive a refund or free replacement sconce.

The recall is of full-size 61-key Casio keyboards with model number CTK-710.

The keyboards were sold in catalogs, on Casio’s and other Web sites and at musical instrument, Best Buy and Wal-Mart stores around the country between May 2006 and February 2007. To arrange for a free repair, call (866) 800-4302.

Babies can fall out of SlingRider carriers About 100,000 SlingRider Infant Carriers, manufactured by Infantino LLC of San Diego, Calif., are being recalled. The SlingRider consists of a fabric carrier with a strap attached to carry an infant up to 20 pounds. go to website home decorators coupon

The plastic slider on the fabric strap can break. This can cause the strap supporting the carrier to release and infants to fall out of the carrier.

Infantino has received 10 reports of plastic sliders breaking, including eight reports of babies falling out of the carriers. There were four reports of impact injuries where the child was taken to the emergency room. One of those children fractured her skull.

The carriers were sold at Target, Babies R Us, BJ’s Wholesale Club, Modecraft and other retailers nationwide, by catalog and online from July 2006 through February 2007 for about $30.

This entry was posted on Wednesday, August 24th, 2011 at 9:14 pm and is filed under Go See. You can follow any responses to this entry through the RSS 2.0 feed. You can leave a response, or trackback from your own site.