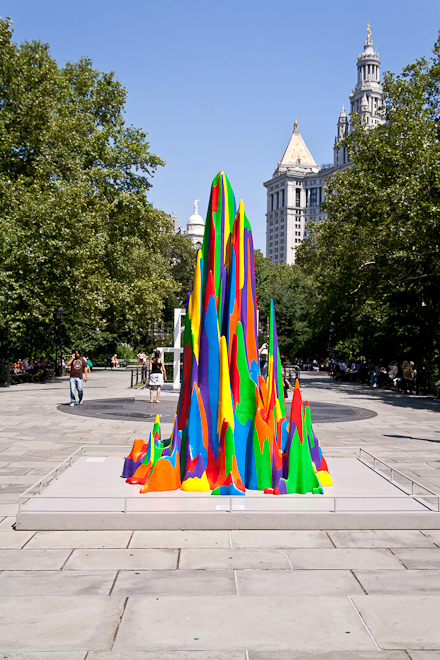 27 career spanning works from the late conceptual artist Sol LeWitt are now on view at City Hall Park through December 2nd. Curated from museums and private collections around the the world, the landmark exhibition Sol LeWitt: Structures, 1965-2006 is the first outdoor career survey of the groundbreaking artist’s conceptual work. 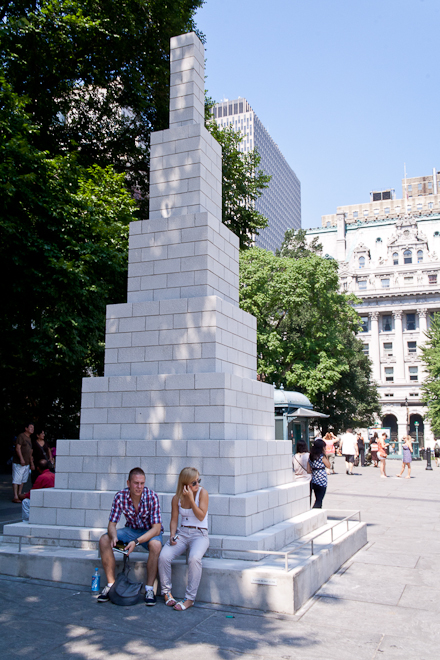 Spanning 40 years of sculptural work, the exhibition traces the development and artistic exploration of one of the most influential conceptual artists of the 20thcentury. LeWitt, a leader of the minimalist and conceptualist movements, was based for much of his life in New York and had a studio on the Lower East Side. Although this exhibition deals primarily with sculpture, or “structures” as he liked to call them, he also worked in other media including photography and paper.

Having been instrumental in developing the idea of conceptual art in the 1960’s, LeWitt explored this theme within his sculpture and other work for the reminder of his lifetime. Sol LeWitt: Sculptures includes significant pieces from the artist’s modular, serial, geometric, and irregular structures series that represent his entire oevre in the medium of sculpture.  Several pieces, such as Tower (Columbus), have been constructed the first time on American soil. 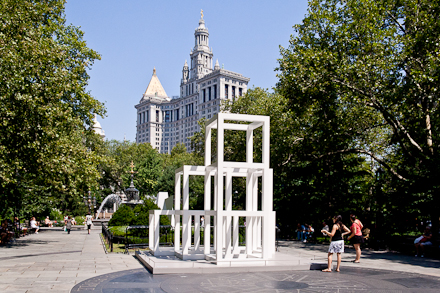 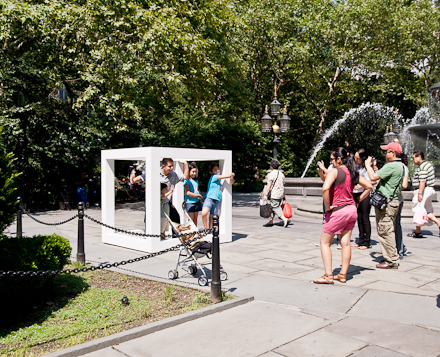 Pyramid (Münster), first built for an exhibition in Germany in 1987,  also appears in its U.S. debut. The piece was one of LeWitt’s first concrete wall structures and represents an important moment in the artist’s development. It takes about 1,300 concrete blocks to make the pyramid and depending on the perspective of the viewer, it can be regarded either as a stepped pyramid or half cube. This theme of convergence between architecture and sculpture is prevalant throughout LeWitt’s sculptural work and  can also be seen in the nine pieces from the Incomplete Open Cubes series which are also being shown for the first time in America.

The process of constructing the new works was overseen by Jeremy Ziemann, a sculptor who assisted LeWitt for nearly two decades. Works were completed according to instructions provided by LeWitt’s drawings, which is similar to as it would have been before his death. What mattered most to conceptual artists like LeWitt was less the finished piece than its actual concept and execution. Hence, it is the idea behind the work which becomes important and takes precedence over concerns of the material and aesthetic tradition. 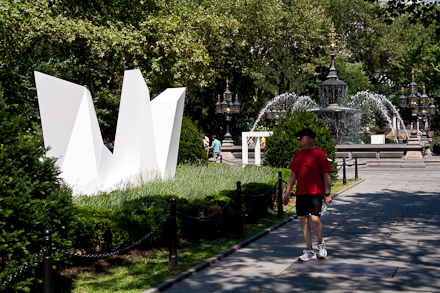 When the exhibition is closed December, the concrete structures will be demolished. Until then, an app and an audio tour has been made available to guide visitors through the pieces, and poetry events and other programming will take place around the installation through the end of the summer.

London, Nov. 16 — Women are putting off getting fit because they think it is more important to be attractive than active, a finding has revealed.

The research, conducted by the Women’s Sport and Fitness Foundation, polled more than 2,000 women.

The analysis of the study found that a quarter were not interested in physical exercises because they didn’t like the way they looked when they were working out or playing sport. see here blocked games at school

In the terms of figures, it was found that 80 per cent of women did not exercise enough.

A quarter of women who were questioned blamed the way they were taught games at school for their dislike of physical activity, 60 per cent said they preferred non- competitive exercise. in our site blocked games at school

In addition, half said that they felt there was more pressure to be thin than to be healthy.

Sue Tibballs, chief executive of the foundation, which conducted the poll, said that the way women are portrayed in fashion and the media makes them feel greater pressure to be thin rather than fit.

“The way women are portrayed in fashion and the media makes them feel greater pressure to be thin rather than fit. Girls think it is more important to be attractive than active, and many are inhibited from exercising because of low body confidence,” the Daily Mail quoted Tibballs, as saying.

“It’s time we provided women with the activities and facilities they want, where they want and when they want.

“There is a fitness crisis and it’s set to get much worse.” Tibballs said. Government guidelines have suggested that women and men should do five half-hour bouts of exercise a week in order to stay healthy, which might range from light jogging to a cardio-vascular workout.

However, the research showed that while 60 per cent of women believed they did enough exercise, only 20 per cent actually did it.

Published by HT Syndication with permission from Asian News International.

This entry was posted on Wednesday, August 31st, 2011 at 5:51 pm and is filed under Go See. You can follow any responses to this entry through the RSS 2.0 feed. You can leave a response, or trackback from your own site.