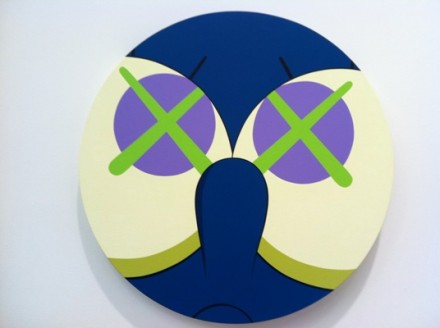 KAWS, Untitled (HTLD2) (2011). All images on site for Art Observed by Megan Hoetger.

Amid a crowded fall season in Los Angeles, Honor Fraser hosts “Hold the Line,” the newest show of works by New-York based media and urban culture phenomenon KAWS. Dubbed an “art entrepreneur,” Brian Donnelly, a.k.a. KAWS, has created an industry around his troupe of animated characters. 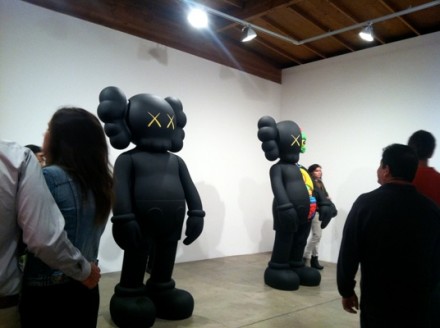 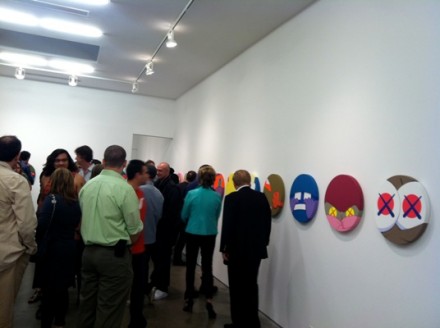 Drawing on cartoon culture from contemporary cell animation to old-school Disney graphics, “Hold the Line” features painting and sculptural works, including a series of tondo portraits, a mural-scale painting, and a pair of monumental sculptures of the artist’s signature Mickey Mouse-like character. In each of the projects, the artist re-casts the figures in non-naturalistic hues and with abstracted features, creating in them a band of happy misfits. The tondo portraits, which fill the first gallery at Honor Fraser, feature an array of faces, or variations on the theme of the face, all bearing the artist’s signature “XX” in lieu of eyes. Defying the rectilinear logic of the typical canvas, the tondo format frees these KAWSBob portraits from the obligations of gravity, allowing them, instead, to roll around and shift within the visual field. As a result, the facial features move from side to side adding to the humor of their already off-kilter expressions. Despite their saturated colors and cartoon-like rendering, though, these characters are tinged with a certain darkness, frowning, sneering, turning their brows down in worry, even screaming out. 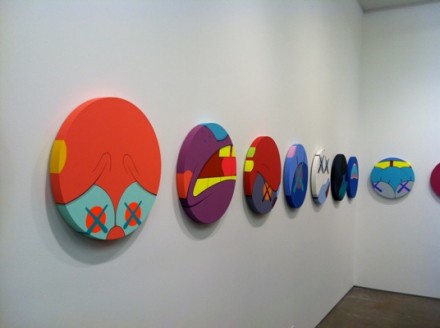 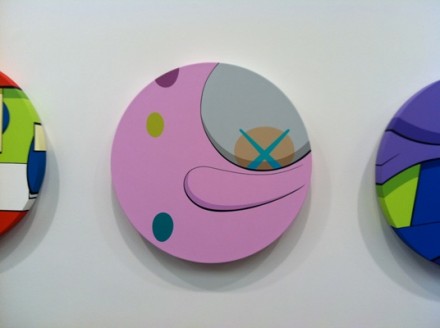 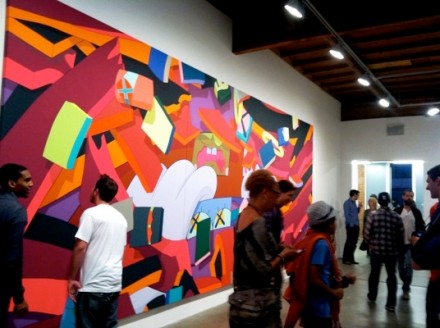 This lurking darkness is also present in Silent City (2011), the three-panel painting that fills the north wall of the second gallery, reflecting (quite literally) and projecting the energy of the vibrant warm hues that dominate the canvas throughout the room. As in the smaller works, the large painting’s high-key surface describes an underlying sense of unease, pulsing with rectilinear shapes gone soft, which bulge and open into unexpected orifices. In the center a KAWSBob character floats with mouth agape. One can imagine the scream from its mouth that may have set the immersive landscape into motion. 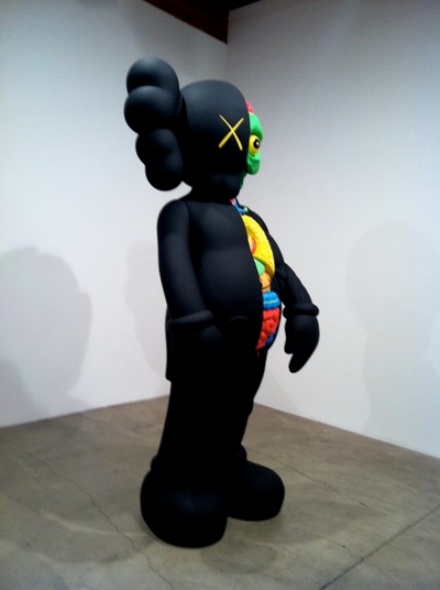 This notion of the bodily continues into the pair of huge sculptures of the KAWS Mickey-like character, which first appeared in a toy edition in 1999. In this piece the artist has created a pair of larger-than-life figurines with one’s innards revealed. Finally the grotesque interior has betrayed the sleek, bright surface of the animated character/toy. But even here, the guts of the character are nothing more than yet another layer of sleek, bright surfaces.

“Hold the Line” moves between painting and sculpture, taking the viewer into a hyperreal space of the surface.  It is no surprise that the boutique of KAWS’ works is titled OriginalFake, referencing the simulacra culture that dominates our current reality and informs the artist’s practice.  One is reminded of a well-known quote from the pop provocateur Andy Warhol, who began working within this condition in the 1960s: “If you want to know all about Andy Warhol, just look at the surface of my paintings and films and me, and there I am. There’s nothing behind it.”

This entry was posted on Thursday, September 29th, 2011 at 11:36 pm and is filed under AO On Site, Art News, Go See. You can follow any responses to this entry through the RSS 2.0 feed. You can leave a response, or trackback from your own site.