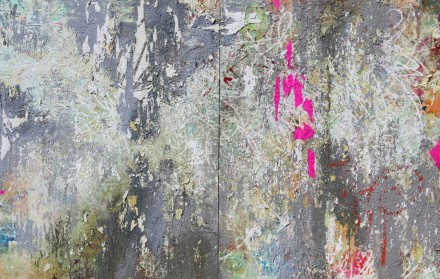 Miami-born, New York-based artist José Parlá‘s current solo exhibition at OHWOW Gallery in Los Angeles blurs the line between street art and action painting. Entitled “Character Gestures,” the show at OHWOW synthesizes the ‘low’ of the urban graffiti sensibility with the ‘high’ of process-based painting as it emerged out of the material and conceptual legacies of Abstract Expressionism. Rather than reading as personal expression of an interior world, though, the paintings, drawings, and sculptures on view function as an archive of the the visual material that emerges from social-spatial politics of the street, their surfaces palimpsests. 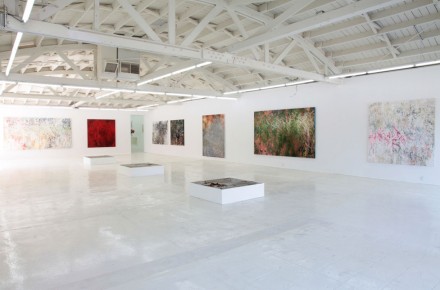 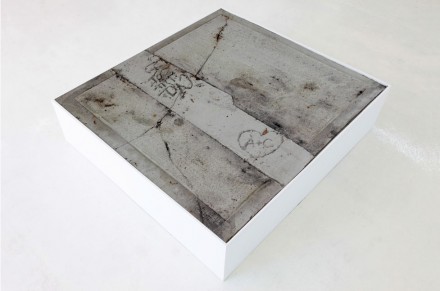 Perhaps this idea is most clear in the sculptural pieces, which bring the sidewalk square, complete with dried leaves, cigarette butts, and lover’s marks, into the gallery. As with the quite literal accumulation of materials and markings on the urban street characterized by the sidewalks, the walls, or in Parla’s case the canvases, carry a history as well. In Cyclone Capsule (2011),  for example, a delicate control is at work within the bold and gritty gestures, which amass on the surface. Here, as in other works in the show, there is a building into and onto the two-dimensionality of the canvas with a depth that lends the piece a sculptural quality. 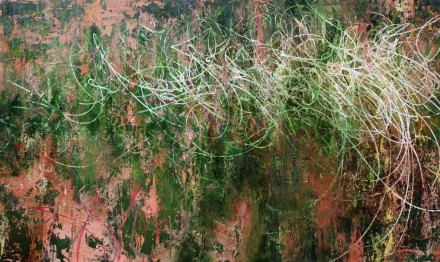 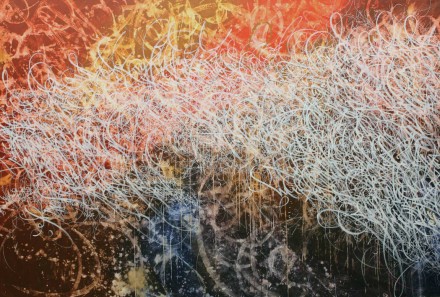 Accumulation also characterizes the layering of a work like Wild Child Hand Style, where, although much flatter than many of the other paintings, the graceful calligraphic line of a skilled tagger is the newest stratum on a built-up surface. These marks, we can imagine, will eventually recede into the surface if given enough time, becoming yet another substratum fighting to remain at the surface.

This “building up,” reminiscent of both the process-based canvases of a figure like Cy Twombly and the walls of, well, just about anywhere in a metropolitan inner-city, records the friction between private and public histories and experiences. The visual abstraction that results is the product of both a carefully organized chaos and the nebulous ways in which these private and personal histories intermingle. Although this hybrid of the high and the low is not exactly a new idea, Parlá’s works make clear that this division was, and is, an artificial one; as with most hierarchies in and out of art, it is only a matter of perspective.

This entry was posted on Tuesday, September 20th, 2011 at 1:00 pm and is filed under Art News, Go See. You can follow any responses to this entry through the RSS 2.0 feed. You can leave a response, or trackback from your own site.