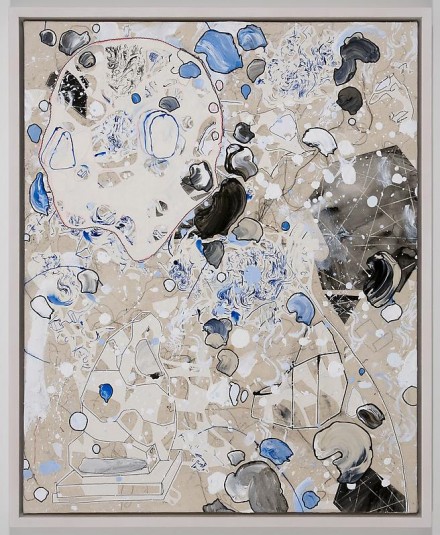 Carter, Throughout (2011). All images courtesy of Marc Jancou Contemporary

On view now at Marc Jancou Contemporary is Forthcoming, an exhibition of new work by the Swiss artist Carter. Open through November 12th—now extended through December 23rd—Forthcoming is the inaugural show at Mr. Jancou’s new Geneva gallery, simply called Jancou. Carter is known for using a variety of media, and although this is an exhibition of works on paper, each was made using a combination of materials and techniques. His work often explores the idea of the self and the shifting concept of identity, with Forthcoming examining the idea of anonymity in particular. 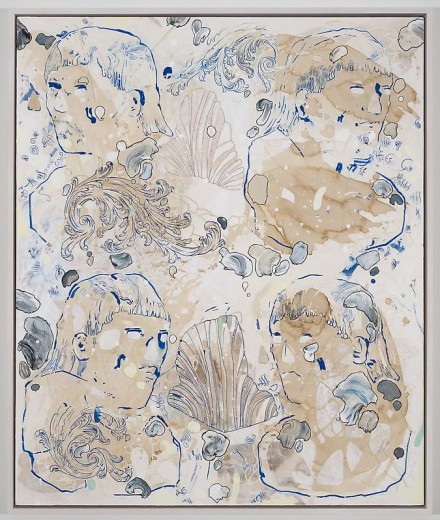 Born in Connecticut in 1970, Carter’s current studio is at the tip of Long Island, and in his latest the inspiration of the Atlantic Ocean is apparent both in color and form. In Placed (Vestige) four identical faces peer off in different directions, cover with water droplets. Baroque swirls among the faces are suggestive of ocean waves, and the paper looks to be stained by water. 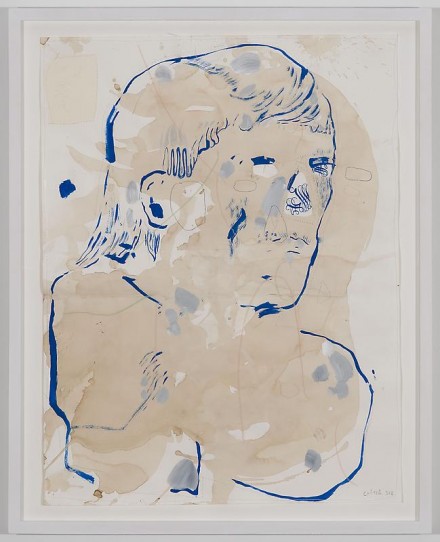 The mask-like faces lack expression and their vacant, blank eyes resemble those of both Antique statues as well as the busts and sculptures Carter has made throughout the past decade. The heads appear in many of Carter’s compositions in Forthcoming, especially dominating the page in Vestige (thinking). Again, Carter outlines the face in a bright indigo, using coffee as shading. Because the face here is much larger, more details are discernible: the wave of his hair, a slight dimple in his chin. Although the face (and more importantly the eyes) remains equally impassive, it seems altogether more of an individual. 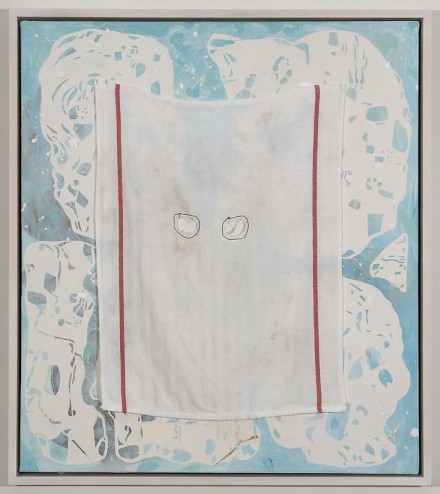 The theme of anonymity is perhaps most strongly demonstrated in his work featuring the sewn masks. In Untitled (stay), white paint spirals and twists like geometric doilies over a pale blue background. Covering much of the canvas is a rectangular piece of fabric with two round cut-outs. Seemingly eye holes, they stare out ominously and protect what lies beneath. We as viewers cannot be held responsible for what the eyes show and what it is they choose to shelter. Even though the holes are only faintly suggestive of eyes, we nevertheless associate the same sense of vacancy as with those of the busts in Placed (vestige).

While the cloth masks may be new elements in Carter’s work, they play on various themes exhibited before. These compositions provoke questions, as the press release describes, “uncertainty and searching, on both a personal and global level.” 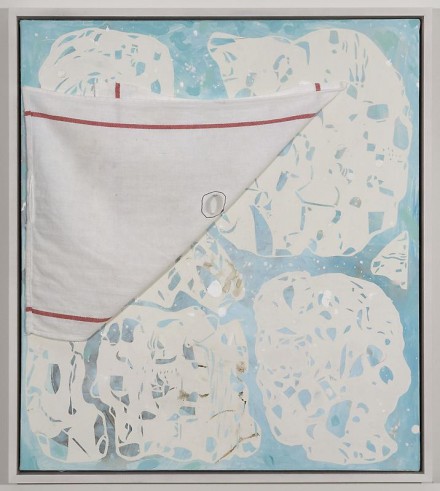 Art Observed was fortunate enough to discuss with Carter some points about Forthcoming and his recent work:

Art Observed: You said in the recent press release for Forthcoming that, “…Anonymity is useful in that it allows you to explore/be/try/risk/portray different facets of one’s life and interests without being fully responsible for the outcome. ” Tell me more about what anonymity is for you personally.

Carter: For me it is too late to be truly anonymous as an artist. Anonymity when referring to my work is interesting in that the ‘figures’ and ‘entities’ that are depicted are not specific people, they are ‘generalized’ figures, meaning they depict more of an essence of a person or situation, a history, a landscape or space, rather than one that can be called specifically by name.

Art Observed: This is a persisting theme in you’re oeuvre, like the old flame that refuses to be extinguished—how has you’re previous work informed the latter?

Carter: Well it depends on when you mean by ‘previous’ and ‘latter.’ My work has always been a very long line of interconnected work. Like one extended novel with sequels and prequels or a movie that is constant where each scene builds on the previous and has a long commitment. I’ve never been interested in creating freestanding, stand-alone, pieces of art. Each work is poetically connected, no matter the medium used.

Art Observed: Your scope of media varies depending on the project, from film to paint. How do you determine which medium is most appropriate for which piece?

Carter: Different tools take different levels of energy. It just depends on where I am and what material I want to use at the time. Painting requires long stretches of time alone, working, singularly in the studio, and is very immediate. Film requires tons of prep time and many faces in the mix to reach a finished line. They are just very, very different atmospheres. It just depends on how many people you want in your face while working—tons or none.

Art Observed: That makes sense. Do you have a preference of which you enjoy more?

Carter: No, I enjoy both.

Art Observed: Tell us a little more about the masks.

Carter: I don’t refer to them as masks. Masks are a creation that allow a person to have a false facade, that’s all, nothing more. In these new paintings these pieces of fabric that hover in front of the canvases both cover and conceal the hours of hand-work work that is underneath, but they don’t really ‘mask’ in the conceptual sense—I like to think of them as just being ‘in the way’ of the work underneath. The fabric on top is like a screen or obstacle rather than a mask. They reveal as well as conceal. They can be apparitions, like those in ‘spirit photography’ around the turn of the last century—spirits or ‘semi-formed personalities’ that are revealed only in the periphery. Fake or not, they are real and have a history and use.

Art Observed: You’re right. They’re more like veils, only slightly obscuring the painting, all the while exposing degrees of what’s underneath. You’ve mentioned the notions of spirituality, fluidity, and the ocean. Do you feel lost at sea or merely watching from the shorelines?

Carter: I’m hovering above both. It’s too scary to be lost at sea and too boring to be watching form the shorelines.

Art Observed: What can we look forward to of yours in the US?

Carter: I’m currently in a wonderful show at the Weatherspoon Museum of Art, there’s a forthcoming show with my gallery in NYC, Salon 94, and I’m working on a book of poetry with my friend James Franco.

This entry was posted on Monday, October 10th, 2011 at 12:02 am and is filed under Art News, Go See. You can follow any responses to this entry through the RSS 2.0 feed. You can leave a response, or trackback from your own site.