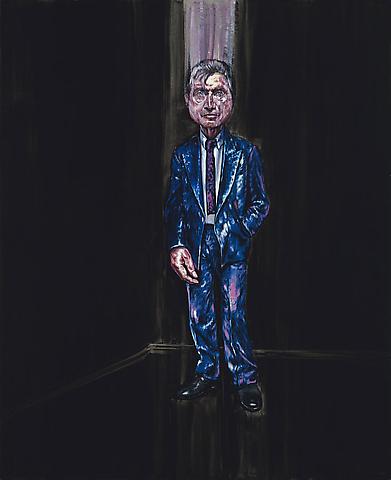 Now on at Gagosian Gallery Hong Kong is a large exhibition of paintings by Chinese artist Zeng Fanzhi. Known for his representations of the human figure, this show presents many key works from the past twenty years of his career. Fanzhi’s work explores the transformations within post-Cultural Revolution China, specifically the developments in art and the art market. His paintings tackle the evolving role of Chinese history and tradition within contemporary society, and his expressionistic style makes clear that this is not necessarily a smooth transition. The paintings are tactile and frenzied both in style and subject matter. Since first being represented by Gagosian in July, this is Fanzhi’s first show at the Gagosian Gallery Hong Kong.

In a recent interview Fanzhi discusses the effects of the Cultural Revolution on artists, saying “The impact…has been huge for us—it has contributed to the complicated milieu that our generation grew up in. As artists, we have too many experiences to serve as our creative inspirations. Apart from dealing with humanity and the society, however, my work is also looking towards the future. Whereas my early work focused on my life and my past, my later work connects with the world, functioning as a dialogue between Eastern and Western cultures.” 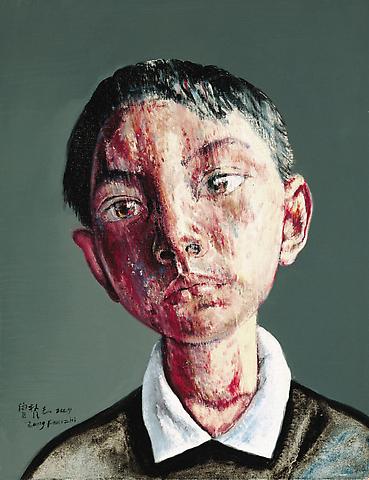 Many of Fanzhi’s portraits can be characterized by their large, frank eyes, and the overall sense can be very unnerving. In Portrait, 09-07-1, from 2009, a young boy stares at the viewer solemnly and directly, unwavering. The painting depicts only the face, neck, and shoulders of the boy, his skin scraped at to create light and shadow, the boy seeming tense with emotion. 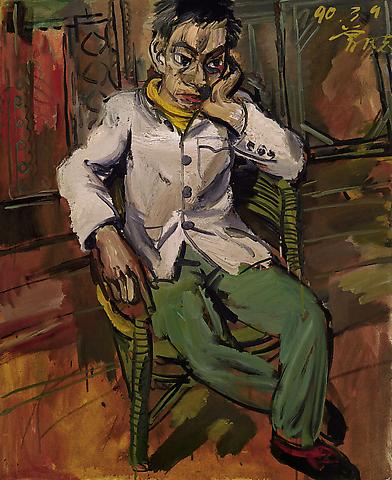 While the eyes are still central in the 1990 A Man in Melancholy, the paint appears thicker and consequently the overall painting seems somehow heavier. The eyes again draw in the viewer, but unlike the artist’s later portraits, here Fanzhi has painted in the man’s entire body and some of the background as well. The colors are more muted, are imbued with grey tones. His body looks burdened by the weight of the paint and the weight of his pose. 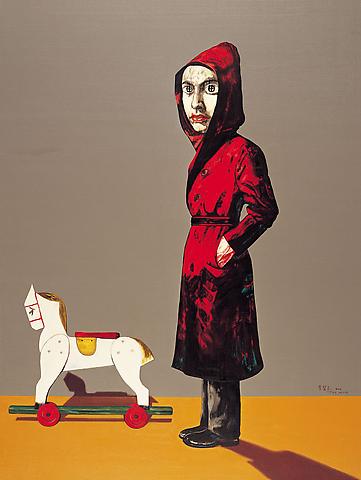 Again the eyes play a key to Portrait, from 2004, but all naturalism is gone: Fanzhi has replaced the pupil with a crosshatched grid. It is as if the man in the red overcoat has a target in his eyes. He stands next to a rocking horse, too small for him to ride. Despite the shadows of the man and horse—falling in opposite directions—the image feels extremely two-dimensional. Fanzhi has again used a sort of scraping technique, but it is as if he has rubbed away at something that was already flat.

Gagosian Gallery Hong Kong’s exhibition gathers together some of Fanzhi’s most important paintings from the past two decades. While the viewer can follow clear stylistic changes, perhaps most intriguing are the countless representations of the human spirit.

This entry was posted on Friday, October 21st, 2011 at 11:21 pm and is filed under Art News. You can follow any responses to this entry through the RSS 2.0 feed. You can leave a response, or trackback from your own site.