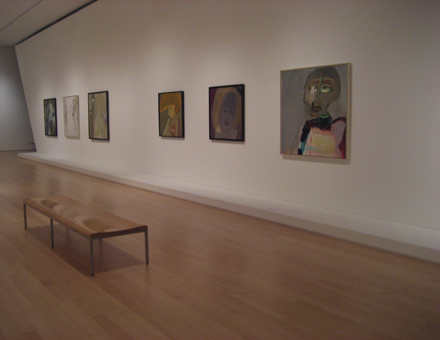 Currently on view at the Brooklyn Museum are nineteen small scale paintings by Eva Hesse. Completed at the age of twenty-four, the early figurative works are rendered in haunting golds and pale, muddled greens. The artist is best known for her fiberglass and polyester resin sculptures, but the paintings assembled for this exhibition shed new light on her work. Deeply personal, they offer a glimpse at the psychology of the tormented artist as she struggled to gain recognition in the New York City art scene of the 1960s before her untimely death at the age of thirty-four. 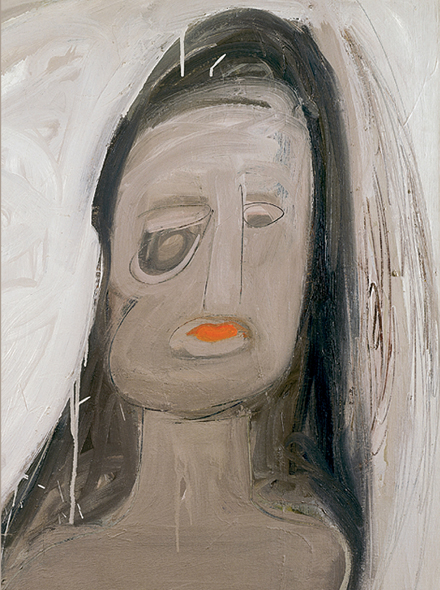 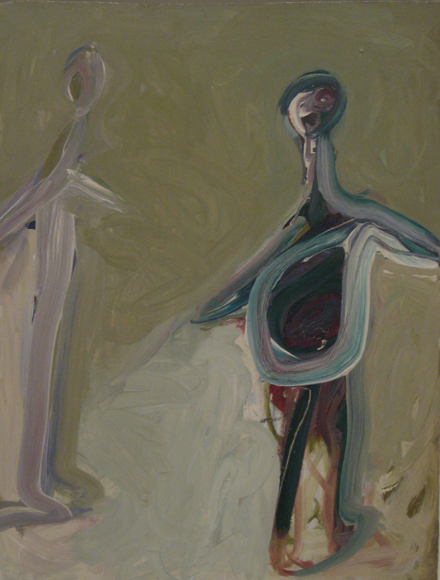 Born in Hamburg, Germany in 1936, Eva Hesse escaped Nazi pogrom with a move to New York, where she lived and worked until her untimely death from a brain tumor in 1970. Highly instrumental in fostering a continued appreciation of Hesse’s work was feminist art historian (and close friend of Hesse) Lucy Lippard, who wrote a seminal monograph of the artist published in 1976. “Between the fall of 1965 and her death at thirty-four in May 1970,” the monograph begins, “Eva Hesse made some 70 sculptures and many more drawings which have assured her place as a major artist.” 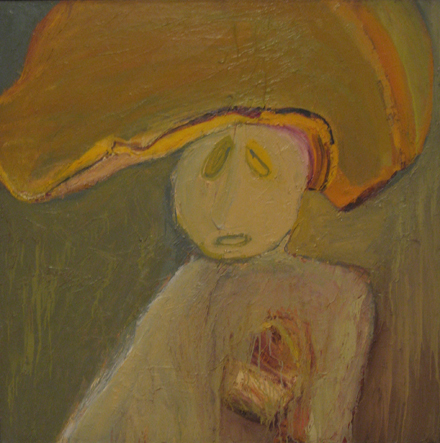 Spectres focuses on Hesse’s early paintings; the exhibition’s title refers to an image or apparition. These apparitions are evoked in the unabashedly non-contextual works. The show’s curator, E. Luanne McKinnon, Director of the University of New Mexico Art Museum in Albuquerque, writes that the title “describes both the temperament of these works as well as Hesse’s examination of herself at this critical point in her maturation as an artist.” Hesse kept a diary throughout her life; it is one of the more heavily-used sources for Lippard’s monograph. Spectres certainly takes into account much of this intimate information about the artist’s psyche, offering what the wall text refers to as “testimonies to a private anxiety.” 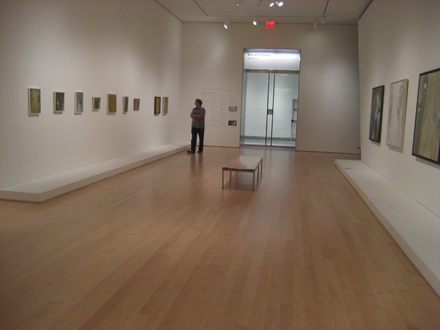 There are two distinct groups within this series: very small works depicting willowy figures in standing or dancing groups, and more traditional easel-sized portraits of alien-like creatures. The majority of the works are untitled, and some come close to self-portraits—as close as the artist ever got to that motif. According to the exhibition statement, the paintings “present a young painter establishing her own creative identity.” No Title (1960), painted in a range of grays with a bold orange lip, is reminiscent of a reflection as though seen through a foggy bathroom mirror. But the paintings may be more than just portraits, seeming explorations of states of consciousness. Karen Rosenberg of the New York Times offers a poignant observation: “The eeriness of the paintings has less to do with their subject matter than with Hesse’s ‘vacillating movement between flesh and paint, line and abstraction, figure and ground,’ as the catalog essayist Helen Molesworth observes.” 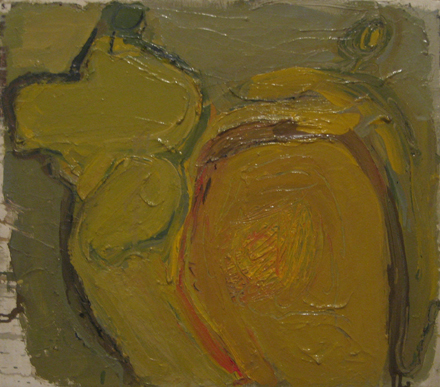 The exhibition considers critical commentary that has previously dismissed the paintings “as abject exercises in self-deprecation,” examining them as a testimony to the artist’s private struggles and professional aspirations. Because Hesse’s life ended before it really took hold, she has been projected into a sacral position sometimes referred to as the Van Gogh effect. As Catherine Wagley writes, the exhibition “seemed destined to play into the mythology that has so disserviced Hesse’s legacy: that of the tortured soul, gone too soon.” Wagley observes that the way the exhibition is framed, “purports to give a glimpse into an early Eva, a Hesse who masks ‘real beauty’ and grapples with ‘ghastly visages.’ Really, what we’re glimpsing is a mask a young artist tried on and rejected before making herself one that fit much better.” Though Hesse’s later work may often be considered much higher quality, the artist’s early painting has never been treated separately from her sculpture. 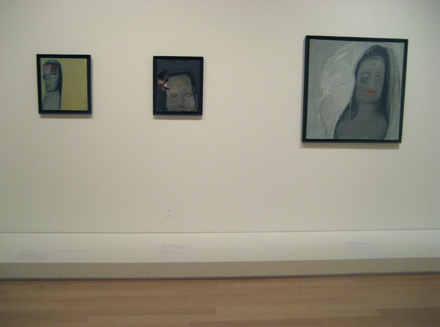 Hesse studied at the Cooper Union, from which she graduated in 1957 and went onto Yale University, from which she graduated in 1959. Shortly thereafter she moved to New York. Both Hesse and Lucy Lippard ran in the same circles, and were included in what Lippard called the “Bowery Boys” clique, a subset of the New York art scene of 1965-69, which included artists working in that area of the city like Sol Lewitt and Mel Bochner, as well as painter Sylvia Mangold. Hesse studied with Joseph Albers and Rico Lebrun, and their influences can be seen in Hesse’s early use of color blocking and line. But Hesse did not connect with either as a mentor. Shortly before graduating from Yale, she wrote self-consoling words in her journal” “The hell with them all. Paint yourself out, through and through, it will come by you alone. You must come to terms with your own work not with any other being.” Although she originally aspired to become a painter, Hesse began experimenting with materials such as rubber, plastic, cheesecloth, plastic tubing, latex, and other popular materials of the time. This is the work by which she gained recognition from dealers, critics, and peers. 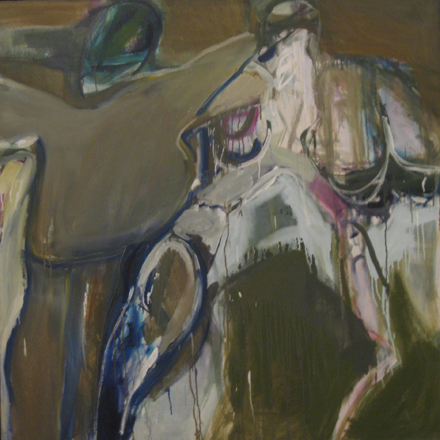 As a group, Eva Hesse “Spectres 1960” traveled from the Hammer Museum of UCLA to the Berkeley Art Museum in California to the Institute of Contemporary Art in Boston. Eva Hesse Studiowork (2009-2010) traveled widely, to the Camden Arts Centre in London, the Fruitmarket Gallery in Edinburgh, Scotland; Hauser & Wirth (who manage her estate) in New York; the Tàpies Foundation in Barcelona’ and the Art Gallery of Ontario in Toronto, Canada. Eva Hesse Drawing (2006) traveled to the Menil Collection in Houston, Texas; The Drawing Center in New York; The Museum of Contemporary Art in Los Angeles; the Walker Art Center in Minneapolis; and the Jewish Museum in New York. A large retrospective traveled from the San Francisco Museum of Modern Art to Museum Wiesbaden in Wiesbaden, Germany, to Tate Modern in London, England in 2003. 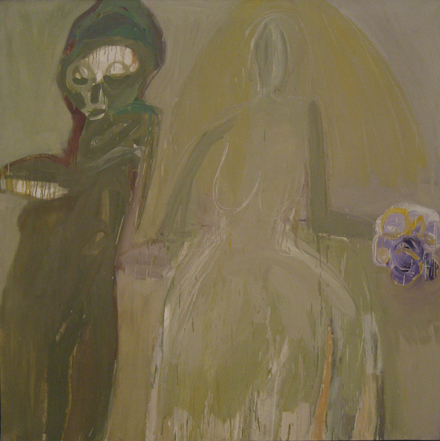 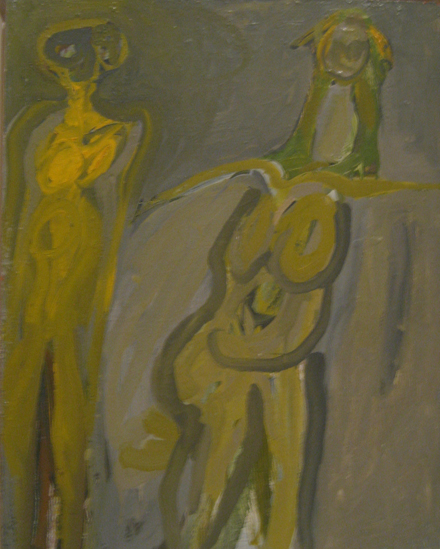 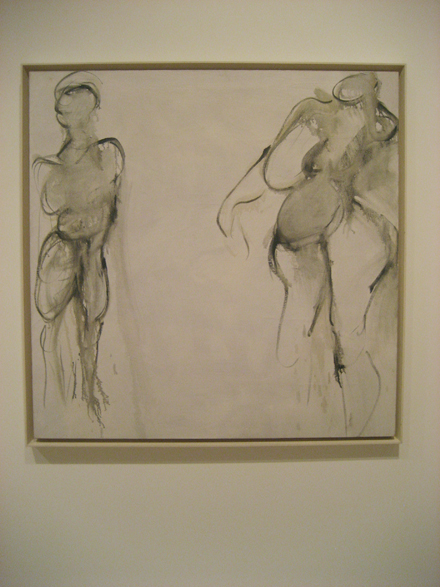 Hesse’s studio, filled with her sculpture. Image via Daily Serving. 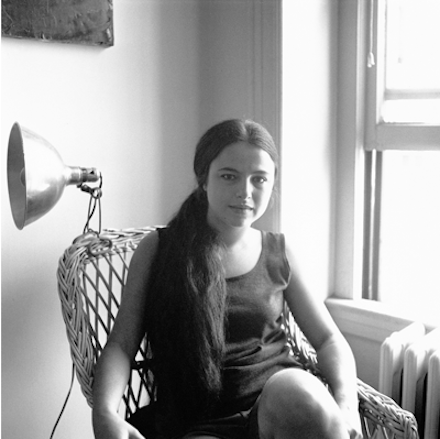 This entry was posted on Monday, October 31st, 2011 at 2:45 pm and is filed under AO On Site, Go See. You can follow any responses to this entry through the RSS 2.0 feed. You can leave a response, or trackback from your own site.