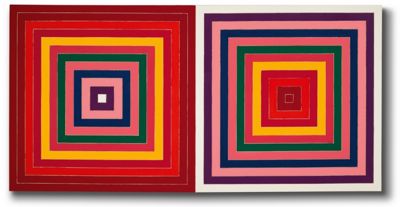 Frank Stella: Connections is a mini-retrospective of Stella’s extensive career currently on display at the Haunch of Venison in London. Covering over 50 years of work characterized by dramatically changing styles, the exhibition could easily be mistaken for one of multiple artists on display. 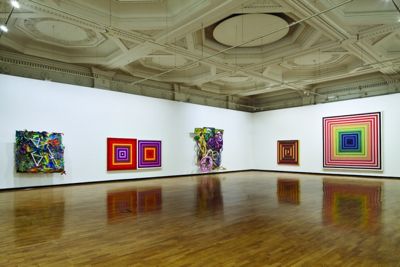 Arranged thematically to emphasize an underlying consistency of recurring explorations such as color and space, the exhibition groups together pieces from different eras. The objective was to “give a sense of Stella’s practice as this sort of interconnected way of working,” says Haunch of Venison Director of Exhibitions Ben Tufnell. This strategy also allows for a direct look at Stella’s progression, as he unravels the very restrictions he set out to create in early minimal works towards spontaneous and swelling three-dimensional forms that categorized his later work. 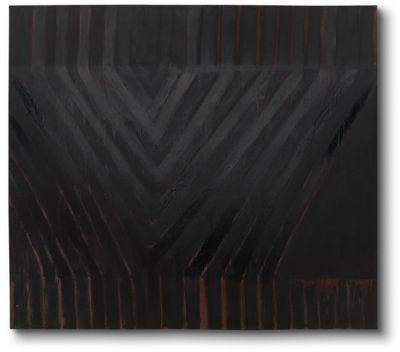 Included in Connected are emblematic paintings from Stella’s early years that played an important role in the emergence of minimalism in its inception such as Delta, which initiated the famous Black Paintings, and the irregularly shaped canvases from his Aluminum and Copper Series. Influenced by Jasper John’s Flag painting in the late 50’s, Stella began to work with the stripe. Stripping it of symbolic meaning, Stella utilized stripes to acknowledge the flat surface of the canvas, claiming there was nothing to the paintings beyond their surfaces. He famously remarked, “What you see is what you see.” His hallmark pinstripes traveling across solid planes and bands of color disallowed any possibility of reading depth or illusionistic space, de-emphasizing traditional composition. 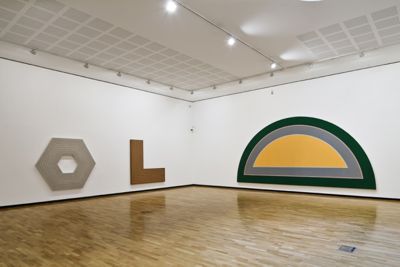 Also on display are works from the Irregular Polygon Series and the Protractor series, which took a departure from the uniform stripes. Fields of color break up irregular and curved canvases, anticipating his exploration of space and volume in the years to come. These early bodies of minimalist works garnered him critical attention in the beginning of his artistic career and remain to be the most revered.

Stella revisited uniform stripes in his mesmerizing Concentric Square paintings, which suggested depth with bright polychromatic color schemes. Lettre Sur Les Aveugles II and Red Scramble represent a critical shift towards volume. By the ’80s Stella had turned to three-dimensionality—moving from the anti-depth mantras of minimalism to exploring volume with “maximalism.” The wall reliefs first quoted cubist collage, and proceeded to encompass a range of gestures and mediums developing into elaborate baroque sculptural pieces, arriving at his Polychrome Relief series. K.37, a piece from this series, swells off of the wall with aluminum tubing, twisting and coiling around a day-glo sculptural form. 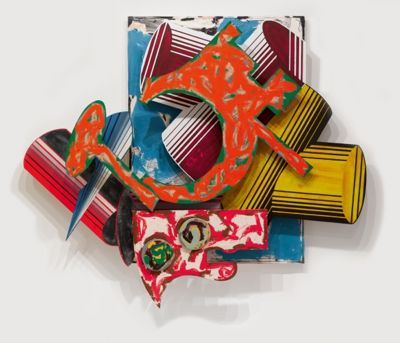 The exhibition also takes the viewer though the many stages of development of built paintings, showing diagrams, maquettes, and the final product. This element is a response to the fact that Stella’s work may not be well understood in London, says Tufnell, and it demonstrates how his ideas are enriched at each stage of the process. 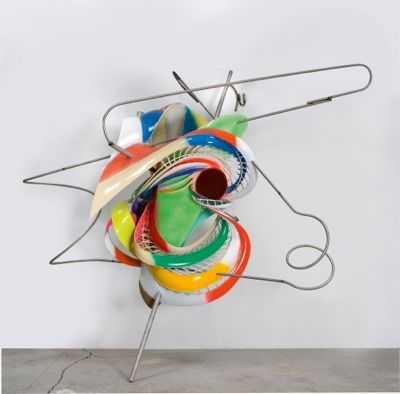 It is clear that for Stella, regardless of form and medium, it has always been about abstraction. In putting shapes together and creating gesture with a painting, Stella suggests that it is possible to create a narrative impulse, “so that the ideas is abstraction is not limited to an abstract…abstraction, as it were.” The narrative that proves most captivating at Haunch of Venison, however, is one of an artist with the ability to consistently and drastically re-conceive artistic direction.

This entry was posted on Tuesday, November 15th, 2011 at 11:24 pm and is filed under Art News, Go See. You can follow any responses to this entry through the RSS 2.0 feed. You can leave a response, or trackback from your own site.