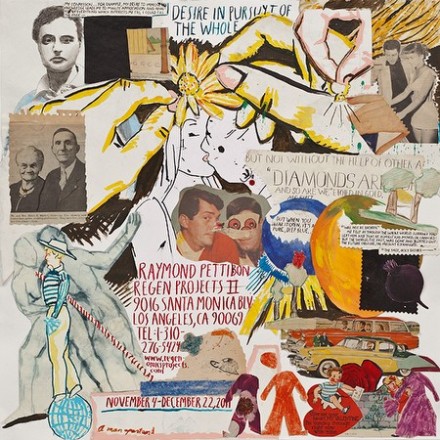 Raymond Pettibon, Desire in Pursuyt of the Whole, 2011. Image via Re-Title.

In his current solo exhibition at Regen Projects, Desire in Pursuyt of the Whole, Los Angeles-based artist Raymond Pettibon shows a range of his works, from the more recent densely-woven collages to his well-known heroic surfers. Pettibon is one of the few artists whose work moves fluidly between the pages of Juxtapoz magazine and the walls of the Whitney Biennial, sustaining both the criticality of a conceptually-oriented practice and the cool ease of a graphic novelist.

Raymond Pettibon, Installation view of Desire in Pursuyt of the Whole, 2011. All images via Regen Projects.

The works on display at Regen Projects range in scale, subject, and style, but holding them together is the poetic paradox that emerges from Pettibon’s ambiguous synthesis of language and image. From the epic western landscape in No Title (His message makes) and the monumental wave in No Title (Think, how were), to the large-scale baseball player in No Title (It was a), we as the viewers spin our own version of stories from which these frames could appear as a fragment of the larger narrative. Even the titles, only a beginning fragment, disallow an easy read. Pettibon’s works point to our willingness to create these stories, to invest a narrative thread into the juxtaposition of text and image.

The complexity of Pettibon’s work derives from the open-ended irony produced in this juxtaposition. The authenticity of the mark-making and the language are negated in favor of their power as tropes in the popular culture image stream. What we find in the works that make up Desire in Persuyt of the Whole is an oddly profound familiarity, like an old saying from the Americana grab bag that we cannot quite place.

This entry was posted on Wednesday, November 23rd, 2011 at 1:27 am and is filed under Art News, Go See. You can follow any responses to this entry through the RSS 2.0 feed. You can leave a response, or trackback from your own site.