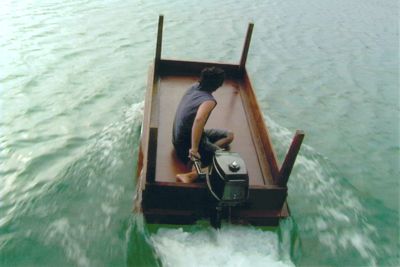 Allora & Calzadilla, Under Discussion (2005); still. All images courtesy the artist and Lisson Gallery.

Collaborative duo Jennifer Allora and Guillermo Calzadilla’s interdisciplinary body of work permeates the realms of sculpture, photography, video, social interventions, and performance, engaging with both art and activism. Now at Lisson Gallery in London is “Vieques Videos 2003–2010,” three video works addressing the island of Vieques, shown together for the first time. From 1941 until 2003 Vieques, an island off the coast of Puerto Rico, was occupied by the US Military and used as a weapons testing range. A grassroots civil disobedience campaign, led by inhabitants of Vieques, gained international support and led to the eventual evacuation of the military, though environmental and political concerns remain largely unresolved. Informed by and engaging with weighty political, historical, and social issues, Allora & Calzadilla often employ the absurd, creating a more approachable framework for confronting overwhelming material. 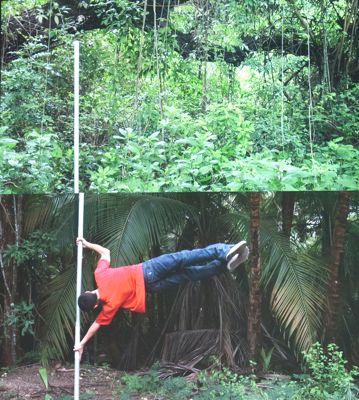 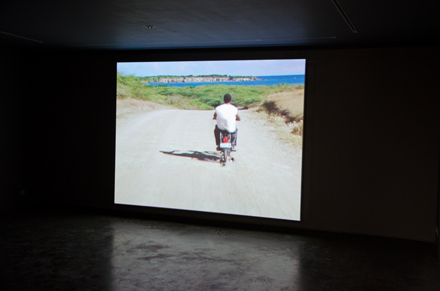 In Returning a Sound (2004), Allora & Calzadilla explore the landscape and soundscape of Vieques, visiting areas previously marked by the memory of spatial expropriation and sonic violence. The film follows Homar, a local activist, as he traverses by moped across the recently demilitarized island, riding through areas that had not been accessible by most locals in their lifetime. In place of a muffler, his moped is equipped with a trumpet, which produces loud blasts of sound as he rides. The trumpet acts as an auditory indicator of land reclamation. The accelerator and the features of the road generate a musical score—an anthem that at the same time celebrates victory and acknowledges the uncertain future of the island. 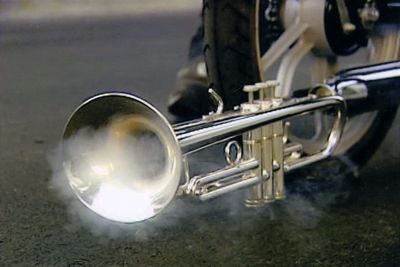 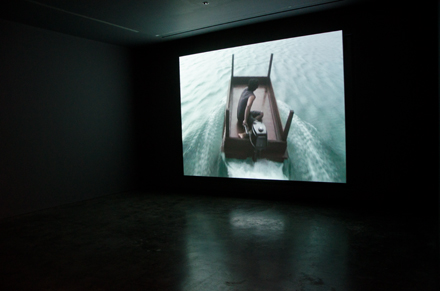 Under Discussion (2005) was created at a time when the state of the land largely remained in question. When military forces were removed from the island, Vieques changed ownership to the US Department of Interior, Fish, and Wildlife Services, providing for a host of additional political and legal debates.  The demands of civic organizations for decontamination and municipal management had yet to be resolved. Again, the film follows a modified vehicle that travels across spaces in crisis. In this case, the vehicle is a table, overturned and fitted with a motor to function as a boat. The son of a fisherman and activist steers the hybrid vehicle around costal areas where the land is still contested. While the table suggests a space of non-violent conflict resolution through dialogue, reversing, mobilizing, and changing its function demonstrates the ineffectiveness of current discussion, and its path along the coast activates new debates over land. 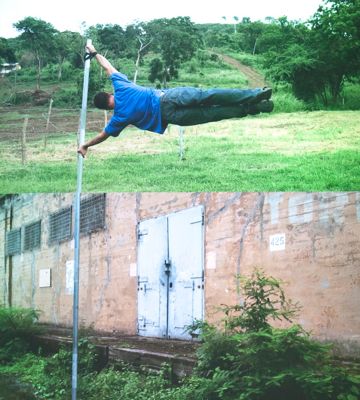 The most recent film in the series, Half Mast\Full Mast (2010) takes the viewer around the island once more, this time abandoning the narrative journey for a fragmented and deliberately inquisitive approach. The screen is horizontally split in two, each half depicting a place on the island, one on top of the other. A pole runs vertically through both screens creating the appearance of a single pole connected across the two backgrounds. A gymnast enters and uses the pole to lift his body up to horizontal position, evoking, momentarily, the appearance of a flag. The human flag appears alternately between the lower or upper partition, articulating a flag flying at either half mast or full mast, marking the background landscapes as spaces of victory or setback. 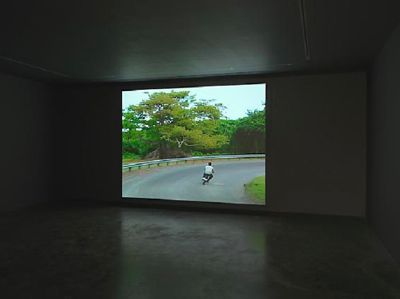 Sound plays a major role in Allora & Calzadilla’s work, “we’re interested in the violence embedded in the transmission of affects and the role that sound has historically played in the way bodies affect one another,” said Calzadilla in a 2009 interview. The implications of sound as violence as it is associated with militarism explored in Returning a Sound are visited once more in Clamour (2006), an installation-performance in which the structure is based on military bunkers. Protruding out from the narrow apertures are not gun barrels but instruments—a five piece band sequestered within playing military medleys from around the world. While not a central element, the steady hum of the motor provides a contemplative backdrop for Under Discussion. Half Mast\Full Mast, on the other hand, is a silent film, and the calculated omittance of sound is heavy. The film takes on a somber tone, a shift away from the poetic absurdity of the preceding Vieques videos.

What Allora & Calzadilla make clear in these works is that the fate of Vieques remains suspended between crisis and progress, a theme that rings clearly and with increasing urgency throughout the three films.

This entry was posted on Thursday, December 8th, 2011 at 11:34 am and is filed under Art News, Go See. You can follow any responses to this entry through the RSS 2.0 feed. You can leave a response, or trackback from your own site.