The Philosophy of Andy Warhol (From A to B and Back Again)
(Andy Warhol, 1977)
Read More and Buy↠
Home » Go See – Washington D.C.: Andy Warhol 'Shadows' at the Hirshhorn Museum and Sculpture Garden through January 15, 2012

Andy Warhol’s silkscreened series Shadows is on view now at Washington’s Hirshhorn Museum and Sculpture Garden. Shadows was created during the last decade of Warhol’s life and consists of 102 prints of shadows produced in his studio. The paintings are exhibited on an uninterrupted wall, providing a unique opportunity to view the series curving through the museum’s galleries. The Shadow series departs from Warhol’s usual pop style as he generated the shadows himself in his studio, creating abstract forms not normally seen in his work. 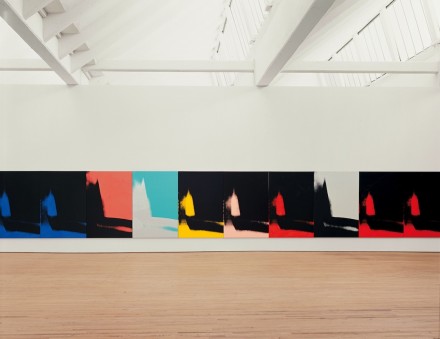 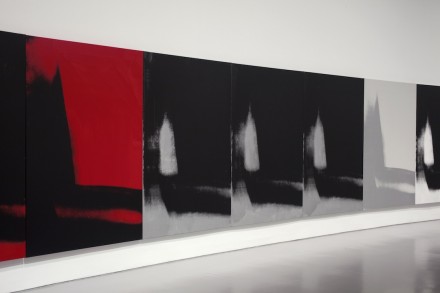 The shadows appear mainly as black shapes on bright, expressive backgrounds ranging in color. This black, lanky form has been dubbed “the peak” and its second iteration—usually a silver “cap”—is shorter, emerging from a black background. The first shadow is a positive, while the second represents a lack or absence of the shadow. Of the series, Warhol’s assistant Ronnie Cutrone said:

Andy had a burning desire to do abstract art… and I said, “you’re Andy Warhol; you should paint something that is something, but it’s not… you should paint shadows. You love shadows anyway. They’re all in your work”… I had 150 shadow photographs on contact sheets twelve days later. We picked some of them out and then he asked me to mix the colors for them. 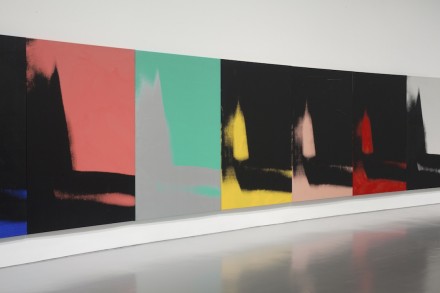 Shadows was purchased as a single piece commissioned by the Lone Star Foundation, now the DIA Art Foundation, in 1979. Today, the Shadow series is a part of DIA:Beacon’s collection. The cycle was rarely seen in its entirety until 1998 when the paintings were first exhibited together by DIA. The series hangs in no particular order, sequenced only by acquisition number. At the Hirshhorn, as at DIA:Beacon, the paintings are grouped often by color: the blues with the blues, the greys with the greys. The linear display is both a comprehensive whole, and a collection of 102 variations. 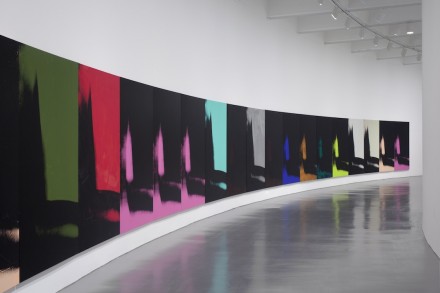 “Mr. Chairman, thank you for allowing a hearing on this important legislation.

“This bill would direct the Bureau of Land Management to convey approximately 2,400 acres of land that they currently manage to the Nevada System of Higher Education. This transfer will allow for development of three new higher education campuses: one for the College of Southern Nevada; one for the University of Nevada, Las Vegas; and one for Great Basin College. go to site college of southern nevada

“Currently, the Nevada System of Higher Education campuses in southern Nevada comprise just 1,200 acres. This is one of the smallest footprints of any major higher education system in the western United States. In fact, the University of Nevada, Las Vegas has less than half the land base of comparably enrolled western universities such as the University of Utah, the University of Colorado, or the University of California at San Diego. The College of Southern Nevada is similarly short on space, having been already near capacity at each of its three campuses before a 15 percent spike in enrollment over the last 3 years. Further, the small branch campus of Great Basin College in Pahrump, which currently holds its classes in high school classrooms at night, has seen a phenomenal 160 percent increase in full-time enrollment this fall. Each of these institutions of higher education has a pressing need for space in order to continue to provide the high quality of education that Nevadans and all Americans expect and deserve.

“My legislation provides for conveyance of approximately 40 acres for the College of Southern Nevada and 285 acres for Great Basin College. 2,085 acres would also be conveyed for the University of Nevada, Las Vegas after remediation of a World War II small arms range on portions of the land. This future north campus for the University of Nevada, Las Vegas abuts Nellis Air Force Base, and the legislation contains a provision that requires a binding interlocal agreement between the Nevada System of Higher Education and the base prior to conveyance. This agreement will ensure that both the mission of the base and our national security interests are protected. go to site college of southern nevada

“This legislation has the support of the entire Nevada congressional delegation and has been welcomed by area leaders. The Nevada System of Higher Education has worked closely with city and county officials to plan the development of world-class facilities in their communities, and with the Air Force to address the needs of Nellis Air Force Base. It is important to note that each of the three parcels designated for transfer has been designated by the Bureau of Land Management for disposal because they are surrounded by development and are difficult to manage. Additionally, the key language in this legislation regarding the activities allowed on these school lands was unanimously approved by this committee in 2002.

“One of our great responsibilities as a Congress and as a people is to provide our citizens with the opportunity to take part in the American dream. And we all know that education is the key to that dream. By working together to make these new campuses a reality we will turn these lands into the literal foundation of opportunity for generations to come.

“I greatly appreciate the distinguished Chairman and Ranking Member making time for this hearing and I look forward to working with the Committee to advance this bill.” # # #

This entry was posted on Saturday, January 7th, 2012 at 9:05 am and is filed under Art News, Go See. You can follow any responses to this entry through the RSS 2.0 feed. You can leave a response, or trackback from your own site.