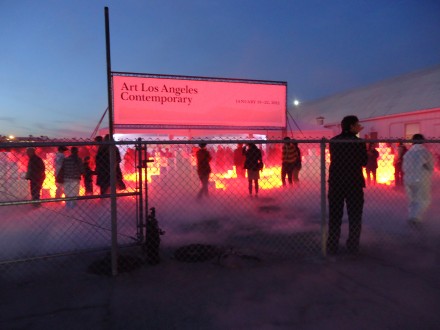 January is a notoriously busy time here in Los Angeles when the two major art fairs in the city, the LA Art Show and Art LA Contemporary, set up shop across town from one another, daring fair-goers to make the arduous trek back and forth across one of the lifelines of the urban sprawl, the dreaded 10 freeway. The opening night performances at both fairs also marked the start of the much-anticipated Pacific Standard Time Performance and Public Art Festival, which itself encompasses over 30 performances and events across the city. 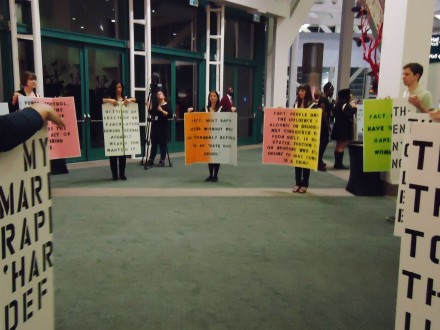 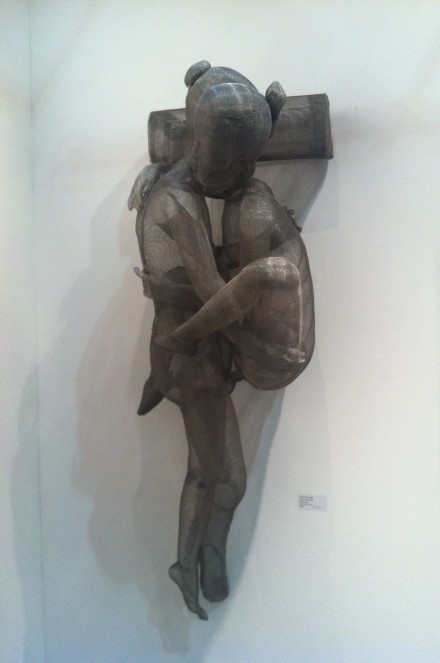 The weekend began with the opening party for the LA Art Show on Wednesday, which offered an intense re-staging of the 1977 performance Myths of Rape by Leslie Labowitz-Starus with Suzanne Lacy, as well as the unveiling of the grand Chinese Pavilion, a new addition to this year’s fair. The presence of East and Southeast Asian art production also extended into the booths where a number of the most enigmatic works presented were by Chinese and Thai artists. At the Shanghai Spring Salon Gallery, works by Zhou Wendon and Xiao Min explored a range of themes from sexuality to the Duchampian gesture, and at Tally Beck Contemporary, the work of the Shanghai collective island6 played with 21st LED signage in humorous ways. 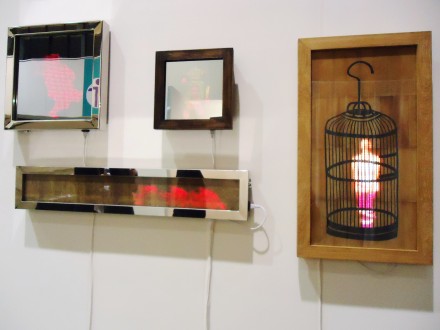 The opening festivities at Art LA Contemporary were held the following day and featured Disappearing Environments, a spectacularly low budget installation by Judy Chicago in collaboration with Materials & Applications based on a 1968 performance. With flares burning among 25 tons of evaporating dry ice outside the entrance to the fair, the scene felt both epic and eerie. Once inside, visitors met a strong showing of Los Angeles-based galleries with a peppering of New York and international booths as well. Memorable works were to be found at Night Gallery, which presented a group installation envisioning a future home on Mars; David Kordansky Gallery, where the photographs and sculptural works of Anthony Pearson gave insight into the perceptual explorations that have defined the artist’s practice; and The Hole, where a group installation of frenetic and almost sculptural paintings pulled viewers into their world. 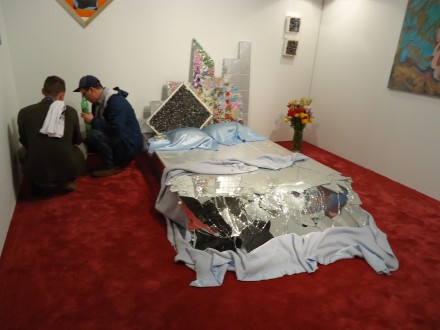 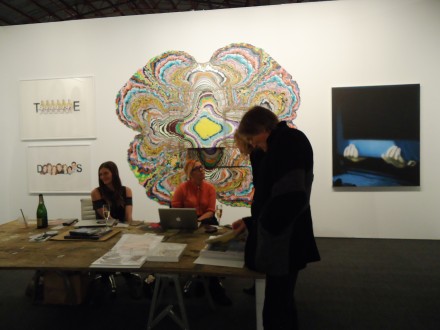 Installation view at The Hole booth.

In addition to the fairs’ host of panels, talks and book readings, much of the subsequent programming throughout the weekend also overlapped with the Pacific Standard Time Performance and Public Art Festival. The LA Art Show presented panels on feminism, re-performance, and social art practices, while Art LA Contemporary hosted a preview of the PST Festival alongside three presentations by authors Sylvere Lotringer, Chris Kraus, and William E. Jones, organized by Semiotext(e).

This entry was posted on Saturday, February 4th, 2012 at 6:45 pm and is filed under AO On Site, Art News, Events. You can follow any responses to this entry through the RSS 2.0 feed. You can leave a response, or trackback from your own site.