London: David Hockney ‘A Bigger Picture’ at The Royal Academy of Art through April 9, 2012 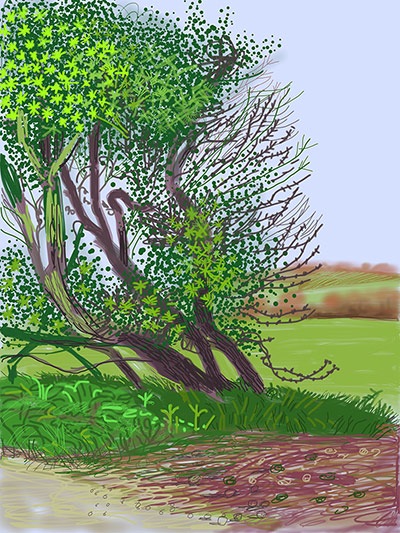 David Hockney, The Arrival of Spring in Woldgate, East Yorkshire (2011), one of a 52-part work. All images via The Guardian

Britain’s Royal Academy of Art is currently showing some two hundred works by ‘Royal Academician’ David Hockney. The exhibition, A Bigger Picture, is centered on fifty-two new works inspired by the Yorkshire landscape of Northern England, where Hockney has been residing on and off for the past few years. Much of the work is new, including fifty-one new works ‘painted’ with an iPad application and enlarged. 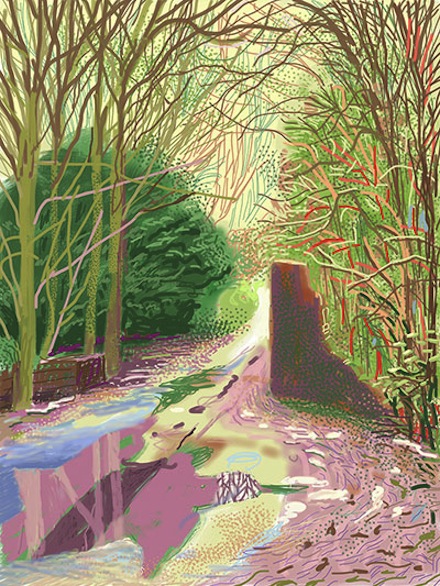 David Hockney, The Arrival of Spring in Woldgate, East Yorkshire, (2011), one of a 52-part work

Dominating the exhibition space are Hockney’s fifty-one prints and his 15 meter (42 ft) oil painting, collectively titled The Arrival of Spring in Woldgate, East Yorkshire (2011). The multi-panelled painting calls to mind Monet, but with the drawing touch of van Gogh. Surrounding this painting are the prints Hockney composed using an iPad application and had enlarged—without pixelating or becoming blurry. 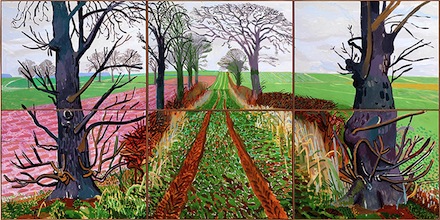 These printed works are boldly colored close-ups of a road and surrounding environment near Hockney’s Yorkshire home. Hockney has been using an iPhone and iPad to draw and document what he has seen in Yorkshire and elsewhere (Yosemite National Part, for example) for several years.

David Hockney, The Arrival of Spring in Woldgate, East Yorkshire (2010)

The large centerpiece painting is of an orderly grove of trees colored in browns and purples, with leaves growing right from the trunks, pointing down the vanishing road. The works may seem reminiscent of Old Master landscape works, and in fact Hockney took inspiration for many of his new paintings from Claude Lorrain’s painting, The Sermon on the Mount (1656). 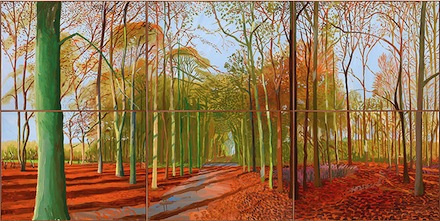 Though mostly newer material, the show also includes some older works, including Rocky Mountains and Tired Indians (1965), and the towering A Closer Grand Canyon (1998), as well as new digital videos that contain images similar to those found in his paintings. The exhibition has proven a crowd pleaser, its large eye-catching works illustrating Hockney’s engagement with landscape and the changing of the seasons.

This entry was posted on Monday, February 6th, 2012 at 12:02 am and is filed under Art News, Go See. You can follow any responses to this entry through the RSS 2.0 feed. You can leave a response, or trackback from your own site.