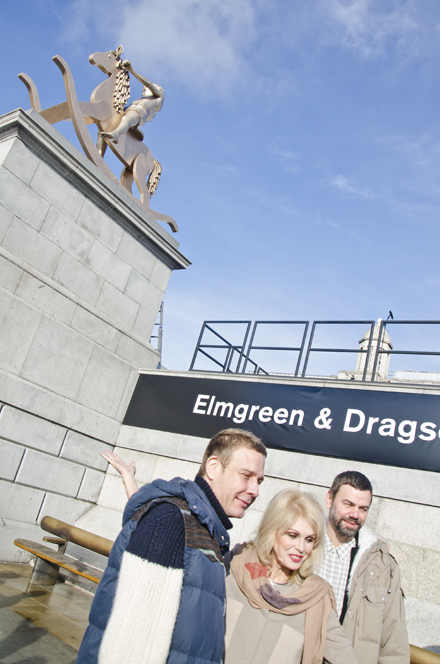 Elmgreen & Dragset with Joanna Lumley All photos on site for Art Observed by Caroline Claisse.

This morning in London the newest commission for the Fourth Plinth in Trafalgar Square was officially unveiled. This year’s winning entry is titled Powerless Structures, Fig. 101, by Scandinavian artistic duo Elmgreen & Dragset. The bronze sculpture of a young boy atop a rocking horse stands four meters high, and joins the solemn company of Trafalgar Square’s other large-scale memorial statues—dedicated to King George IV and two famous generals respectively. A gentle pun on the tradition of the equestrian military monument, Powerless Structures, Fig. 101 playfully subverts notions of strength and power, instead celebrating their absence. Unlike most monuments, Elmgreen & Dragset’s child is not intended to commemorate history, but rather symbolizes a hope for the future, a fitting choice for one of London’s most famous public spaces as the city prepares to host the 2012 Olympics this Summer. 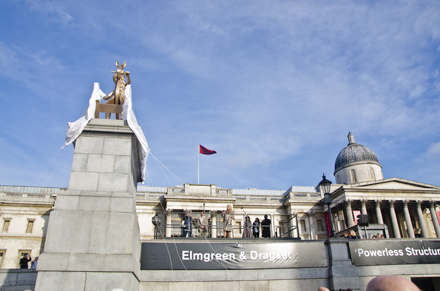 Since beginning work together in 1995 as Elmgreen & Dragset, Danish-born Michael Elmgreen, (b. 1961) and Norwegian Ingar Dragset, (b. 1969) have garnered notoriety for their witty large-scale artworks that explore the often uncomfortable relationship between public and private spaces, individual and collective identities and memories. As with Powerless Structures, Fig. 101, Elmgreen & Dragset do not shy away from creating works that pack an emotional and conceptual punch, while still remaining accessible and engaging to a broad audience. The Fourth Plinth is not the artists’  first monument; in 2006 they won a competition in Berlin to make a memorial for homosexuals persecuted by the Nazis. Their winning proposal was a simple concrete cube with a window in it, through which viewers could see a video of two men kissing. Elmgreen & Dragset have also had exhibitions at the Tate Modern and at the Serpentine Gallery in London, and participated in the 2009 Venice Biennale, in which their work, The Collectors, received a Special Mention. 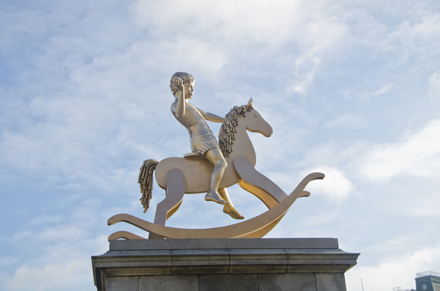 The Fourth Plinth Programme was initiated in 1998, with the mandate to “fill” the empty plinth, which had originally been designed by Sir Charles Barry in 1841 for an eventual equestrian statue, which was never completed due to lack of funds. Beginning in 2005, the Fourth Plinth Commissioning Group has selected a rotating series of contemporary commissions for the Fourth Plinth, beginning with Marc McQuinn’s Alison Lapper Pregnant. Most recently, Yinka Shonibare’s Nelson’s Ship in a Bottle stood atop the plinth, and Katharina Fritsch’s electric blue Hanh / Cock will come after Powerless Structures, Fig. 101, in 2013. All of the Fourth Plinth commissions have thus far shared a somewhat whimsical approach to cultural symbols and monuments, combining humor with social commentary, and playing with scale and proportion. 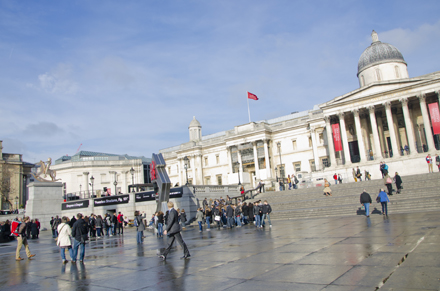 Informed by comments from the public, every year a group of respected artists, curators, and notable cultural figures selects the winning Fourth Plinth proposal from an impressive shortlist. The chosen commissions are intended to further dialogue about the role contemporary art plays in defining public spaces and civic and national identity. The viewing public is encouraged to participate in the commission process, which is accompanied by conferences, talks, and a community education program. Elmgreen & Dragset created Powerless Structures, Fig. 101 with this spirit of public engagement in mind; as Michael Elmgreen declared in a statement to FT Magazine: “To keep the works changing every year, and all the debate surrounding the choices, it is a fantastic thing. This is a symbol of London as a changing city, with a changing population. Maybe we should remember the battles of the past in different ways from endless monuments celebrating victory, or commemorating victims. Besides it doesn’t even work—not many people look at the other statues [in the square], or know who they are.” 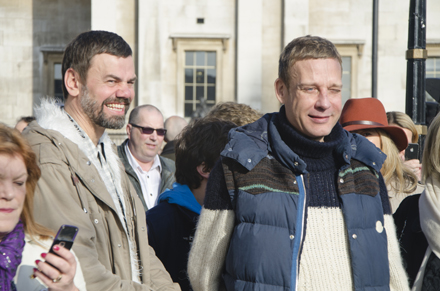 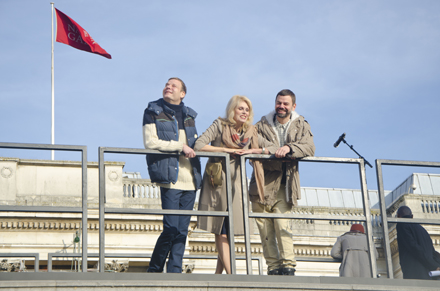 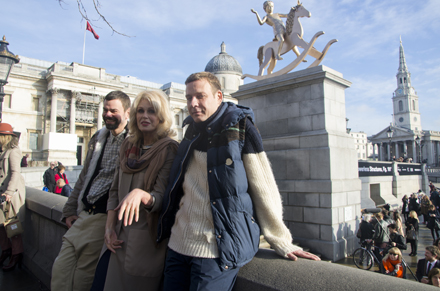 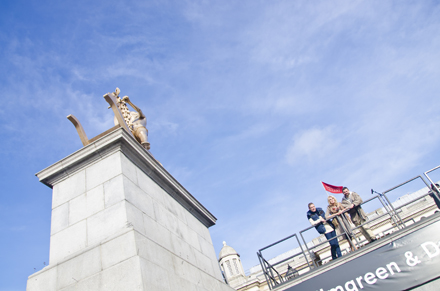 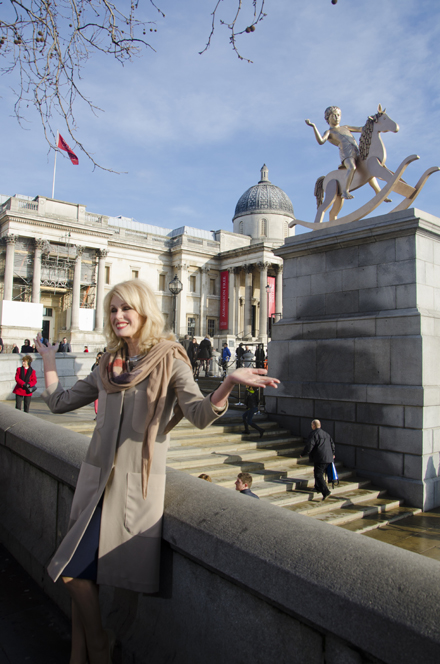 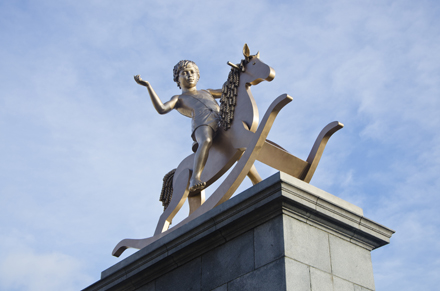 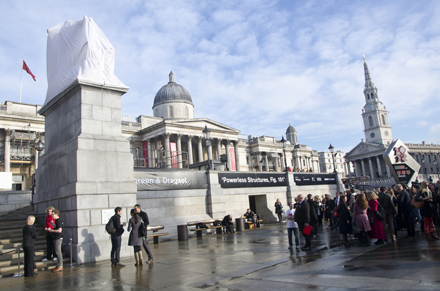 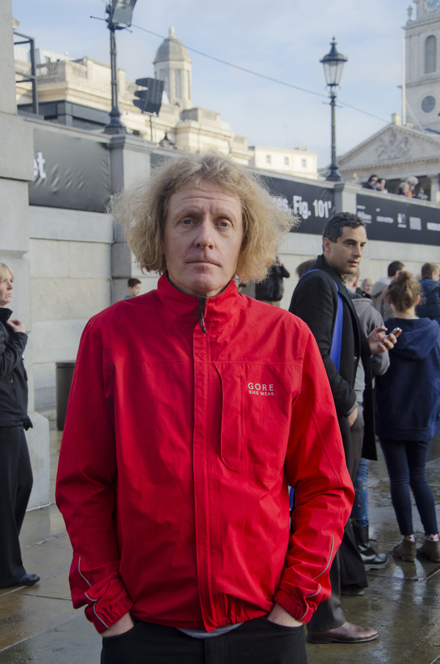 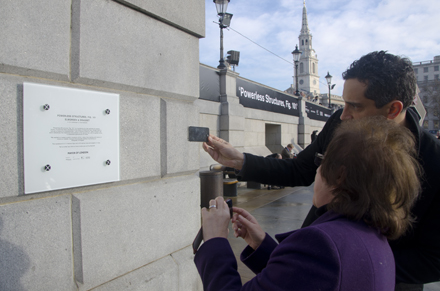 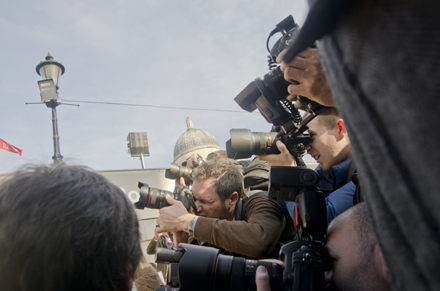 This entry was posted on Thursday, February 23rd, 2012 at 7:32 am and is filed under AO On Site, Art News, Go See. You can follow any responses to this entry through the RSS 2.0 feed. You can leave a response, or trackback from your own site.