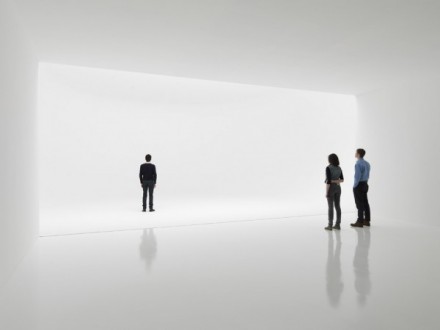 At age 72, Doug Wheeler opens his first solo show in New York City at David Zwirner. A single site-specific installation, SA MI 75 DZ NY 12 challenges the finite perceptions of interior space, creating what some have called a visual “vacuum tube” in the gallery’s massive exhibition space.  Long regarded for his contributions to the “Light and Space” movement of the 1970s, the American artist works to remove the visual cues of a space, focusing instead on the materiality of light and the human perception thereof. Longing back to the days of his childhood, flying over the western desert with his father, Wheeler said in a recent interview with the New York Times, “When I was growing up, the sky was everything to me.” 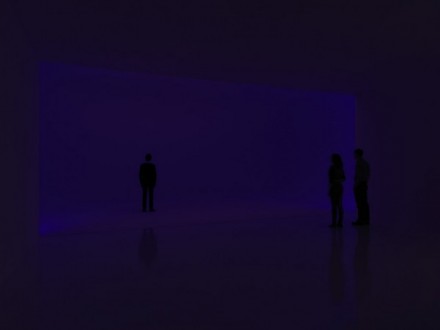 With the entire room painted a blinding white, the piece creates a virtual wall that fools the viewer into believing they are staring at an endless expanse before them. Wheeler’s fourth ever ‘infinity environment,’ the piece adds a dynamic cycle of simulated dusk to dawn transitions through darkness. 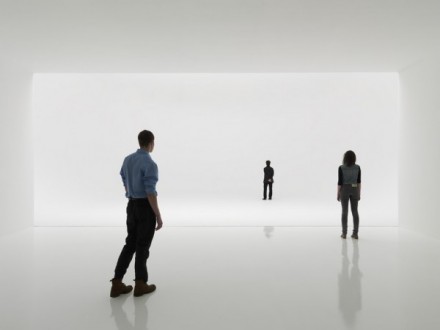 A fierce perfectionist, Wheeler’s exacting specifications and principled approach to his work have frequently put him at odds with major figures in the art world. While he has been featured across the globe, including the 1976 Venice Biennale, his demanding pieces have kept him out of galleries and in some ways prevented him from exhibiting in New York until now, when David Zwirner offered him full creative control over the space.

This entry was posted on Monday, February 13th, 2012 at 12:01 am and is filed under Art News, Go See. You can follow any responses to this entry through the RSS 2.0 feed. You can leave a response, or trackback from your own site.