AO On Site: Josephine Meckseper ‘Manhattan Oil Project’ at The Last Lot through May 6, 2012 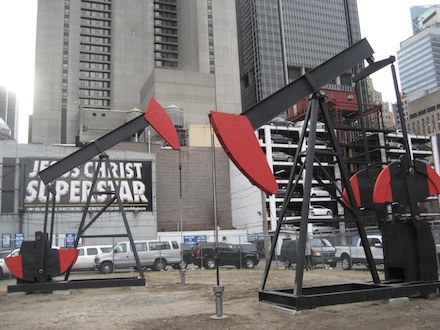 Situated within the western reaches of Times Square, between an advertisement for Jesus Christ Superstar, a multistory parking lot, and the Playwright Pub, stands New York-based artist Josephine Meckseper’s Manhattan Oil Project. The work, supported by the Art Production Fund and Sotheby’s, is the second installation in The Last Lot project space, an initiative sponsored by The Shubert Organization for the Times Square Alliance’s public art program. Occupying one of the few remaining vacant lots in this seat of American commercial culture since Monday, the two hulking red and black structures rhythmically swing up and down, reaching 25 feet at their highest points. Meckseper explains, “The critical placement of the pumps is a conceptual gesture that raises questions about business and capital; land use and resources; wealth and decay; decadence and dependence.” 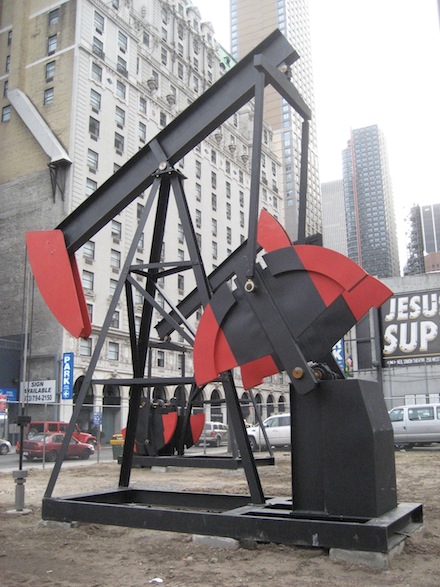 Meckseper based the towering kinetic sculptures on mid-20th century oil pumps she studied on a visit to the post-industrial town of Electra—the former pump-jack capital of Texas. While she formally quotes modernist geometric abstractions from the likes of American sculptors Alexander Calder and Mark Di Suvero, the artist oversaw the assembly of her functionless pump-jacks at Pabst Enterprises Equipment Co. of Elizabeth, NJ, an enterprise capable of manufacturing the real thing. Motorized to mimic the methodical oscillations of a working oil pump, Meckseper’s Project seeks to strike a chord with the public’s environmental consciences, rather than oil. 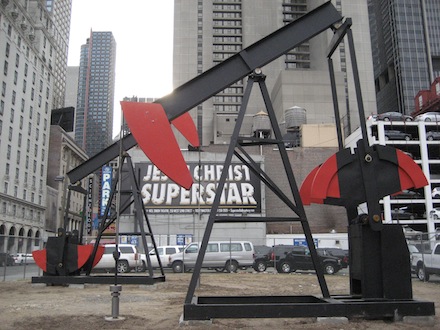 With a reputation for politically charged art, Meckseper initiates a conversation about the state of contemporary American business, wealth and consumerism by placing this familiar symbol of American industrial wealth against the bright lights of American hyper-consumption. As a guard opens the chain link fence surrounding the sculptures and switches on the power at 8:30 each morning, harried commuters take a pause at the hypnotic bowing. The public is invited to ponder these paradoxes at the corner of 46th Street and 8th Avenue through May 6, 2012. 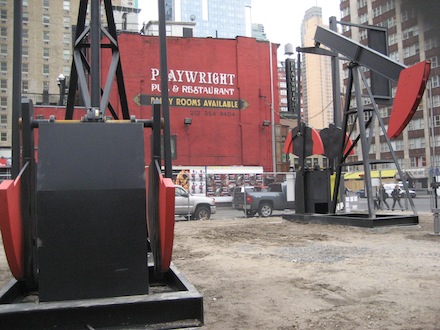 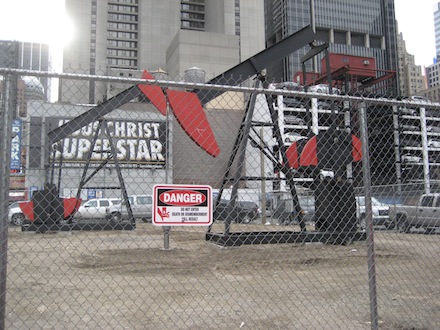 This entry was posted on Sunday, March 11th, 2012 at 12:31 pm and is filed under AO On Site, Go See. You can follow any responses to this entry through the RSS 2.0 feed. You can leave a response, or trackback from your own site.