AO On Site – New York: ‘John Chamberlain: Choices’ at the Solomon R. Guggenheim Museum through May 13, 2012 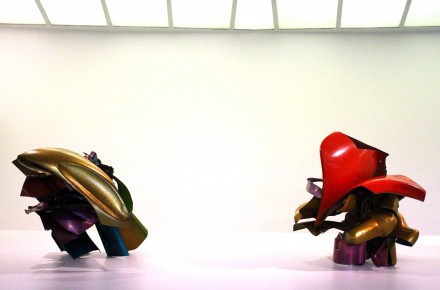 Moto (1963). All photos on site for Art Observed by Elene Damenia.

John Chamberlain: Choices opened at the Guggenheim on February 24th, and will remain on view through May 13th, after which it will travel to Bilbao, Spain. Chamberlain was preparing for the current Guggenheim retrospective from his studio in Shelter Island when he passed away this December, aged 84. Although the exhibition officially began to coordinate in 2010, Senior Curator Susan Davidson told the press conference that the idea had been brewing for over a decade. The museum currently showcases almost 100 works from a lifetime of aesthetic development, garnered from private collections in America and Europe, as well as more recent works by the artist before his death. 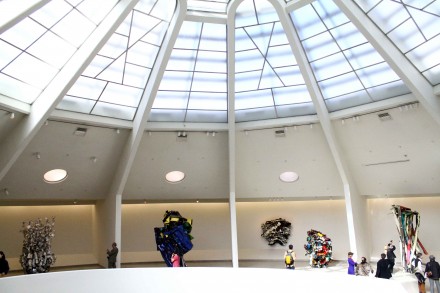 Chamberlain’s work has been showcased in more than 140 solo shows, retrospectives, and traveling exhibitions, and is found in 60 public collections. He has maintained a relationship with the Guggenheim since 1966, when he received the first of two fellowships from the John Simon Guggenheim Memorial Foundation. His first retrospective at the Solomon R. Guggenheim Museum was in 1971. 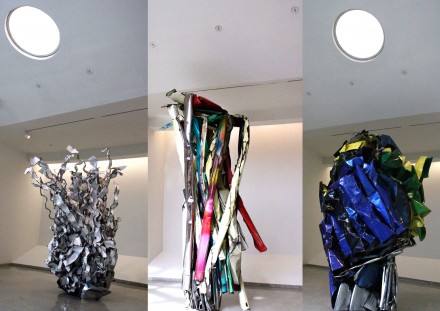 Most recently, the still-working Chamberlain displayed his work in his 13th solo show specific to The Pace Gallery in March 2011, where he had been represented since 1987 until a 2010 switch to Gagosian. Chamberlain showed at Gagosian amidst rumors that the Pace Gallery refused to exhibit work made in part by a Belgian fabricator when Gagosian reportedly purchased the works from Pace for $20 million. Larry Gagosian maintains his relationship with Chamberlain’s work as Chairman of the Guggenheim exhibition’s Leadership Committee, which includes noted members Dorothy Lichtenstein and fashion designer Vera Wang. In cohesion with the Gagosian show, a concurrent exhibition at Paula Cooper Gallery ran through April, which displayed work from as early as 1962. 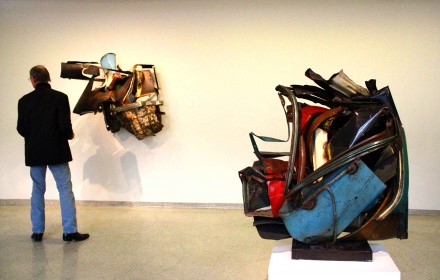 1962 was a pivotal year for Chamberlain artistically. Legend (and the New York Times) says that he returned to his studio after a night of drinking, and threw a sledgehammer at one of his works-in-progress. The dents the sledgehammer made completely redefined the piece (now Dolores James (1962)), and is now in the Guggenheim’s permanent collection in New York. 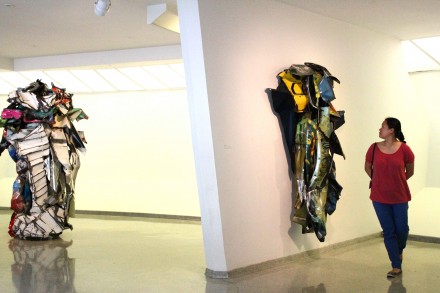 In addition to his personal redefinition, 1962 also placed Chamberlain art-historically. The consumerism of pop art is evidenced with his use of automobile metals and parts, as well as an awareness of pop culture and the work of Andy Warhol in the black and white steel of Marilyn Monroe (1962). The work also references minimalism, with its angular abstractions from often even the slightest combinations of material. As Susan Davidson said, Chamberlain’s work is “in the middle of everything and the center of nothing.” 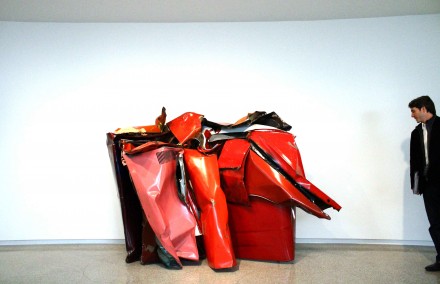 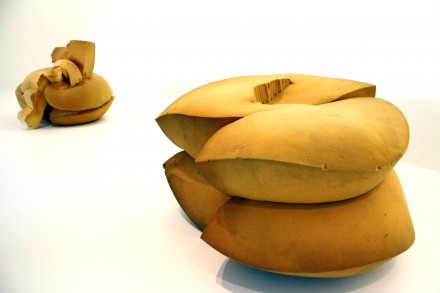 Widely respected as a main player of American Abstract Expressionism, Chamberlain’s dually adaptive and distinctive sculpture is defined by trademark free-standing twists, crumpling, and welding. Using car parts, the typically mundane is reshaped with structural delicacy. Everything from laundry or curtains provided inspiration—although he once told Susan Davidson that, “if you looked at things the way everybody else did, you would be painting shower curtains in New Jersey.” 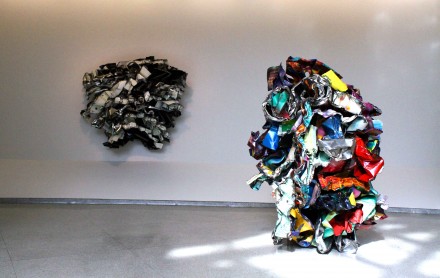 Chamberlain’s inherent creativity was enhanced by a passion for music and language, which gave way to the noted color and movement in his works. His carefully labeled “choices,” rather than found objects, inspired his development, thus the retrospective was named for his distinctive style. 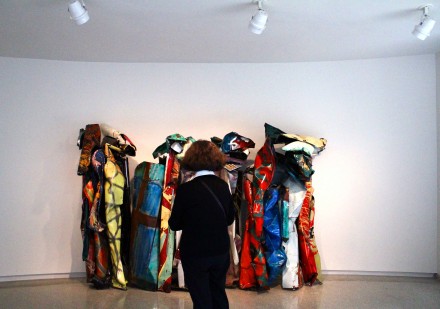 The lack of convention allowed him to explore materials in works such as the 1970s Luna Luna Luna mineral-coated, synthetic polymer resin, which produces a multicolor effect, and the almost figurative scenes of Dooms Day Flotilla, Gondola (both 1982), and The Devil and the Deep Blue Sea (1983). The Guggenheim also displays early two-dimensional works, including oil and watercolor painting from 1958, and Sensations (1965), a square painting in lacquer and metal flake Formica. 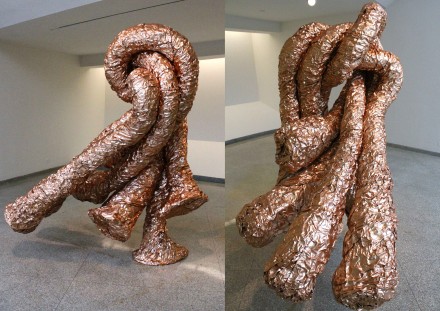 The top floor of the exhibition includes Chamberlain’s largest-scale works, mostly made at his home in Sarasota, where he moved in 1986 before eventually settling in Shelter Island, New York. The exhibition ends with gold aluminum foil that offsets the silver aluminum on view in the main atrium, but not before Couch (2007), where the viewer is permitted to rest on the parachute fabric-draped foam. 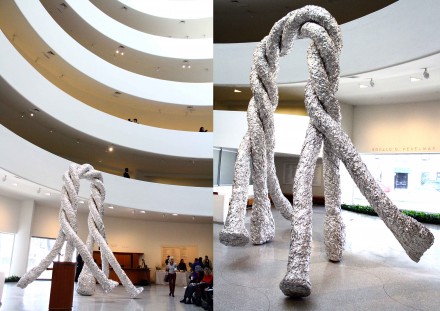 Described by Davidson as an “inveterate rebel,” John Angus Chamberlain was born in Rochester, Indiana, where he lived above a meat market. His father kept a saloon, a family profession that had endured five generations, but Chamberlain was raised by his maternal grandmother in Chicago after his parents divorced. He learned to fly a plane at age eleven, served in the navy, and studied hairdressing with the G.I. Bill. The machinations of flight and the “coiffed” style of hairdressing later influenced his art. 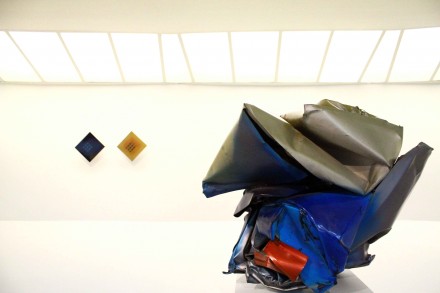 He eventually enrolled at the School of the Art Institute of Chicago from 1951 to 1952, where he honed his lifelong evolving interest in sculpture. Chamberlain both studied and taught sculpture at Black Mountain College in North Carolina in the mid 50s, where he surrounded himself with like-minded creatives. By 1959, he was relying heavily on automobile parts in his work, adding color in the early 1960s, when he showed throughout New York. In 1964, Chamberlain was at the Venice Biennale. His work has been on permanent view at the Chinati Foundation in Marfa, Texas since 1986. 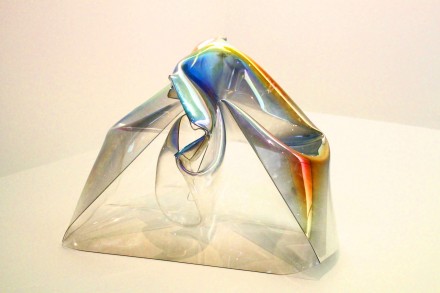 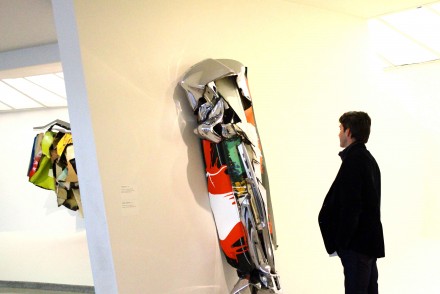 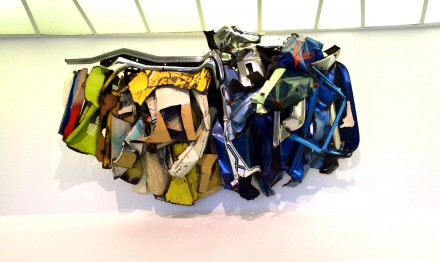 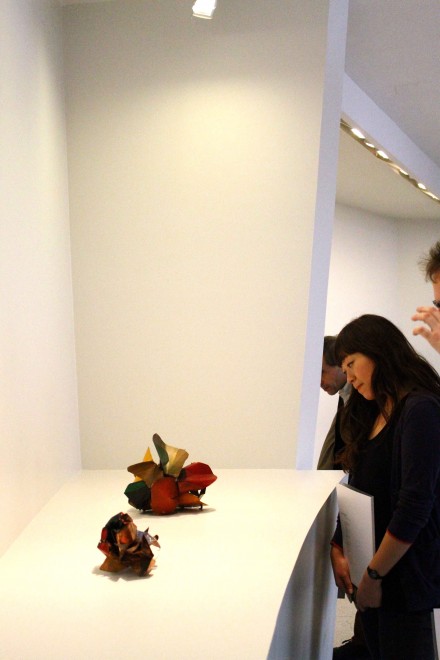 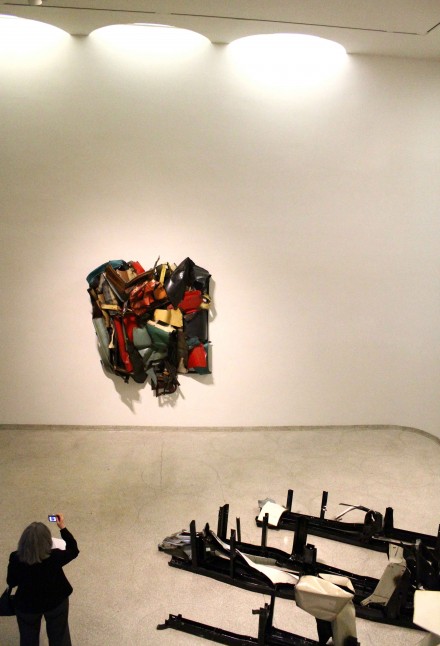 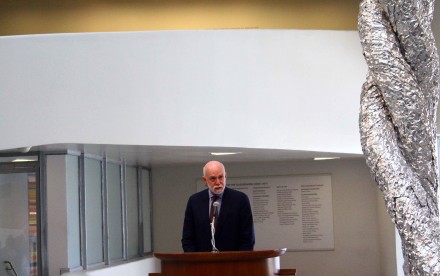 Directory of the Solomon R. Guggenheim Museum and Foundation Richard Armstrong during his introductory speech 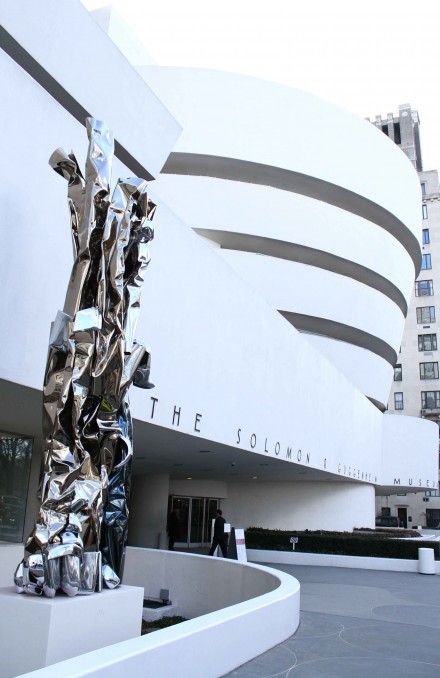 This entry was posted on Monday, March 5th, 2012 at 12:29 am and is filed under AO On Site, Art News, Go See. You can follow any responses to this entry through the RSS 2.0 feed. You can leave a response, or trackback from your own site.