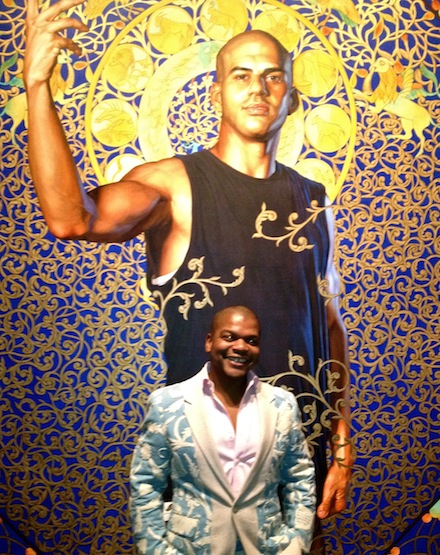 Kehinde Wiley at the opening of The World Stage: Israel at The Jewish Museum. All photos on site for Art Observed by Perrin Lathrop unless otherwise noted.

In the most recent iteration of his World Stage series, American artist Kehinde Wiley turns his eye on Israel. Wiley broadly considers The World Stage a project geared toward taking the “cultural temperature.” More specifically, the series represents a mission to picture young black men globally and has already brought the artist to India, Sri Lanka, Brazil, Lagos (Nigeria), Dakar (Senegal), and China. With The World Stage: Israel, now on view at The Jewish Museum in New York, Wiley brings the African and Jewish Diasporas into convergence. 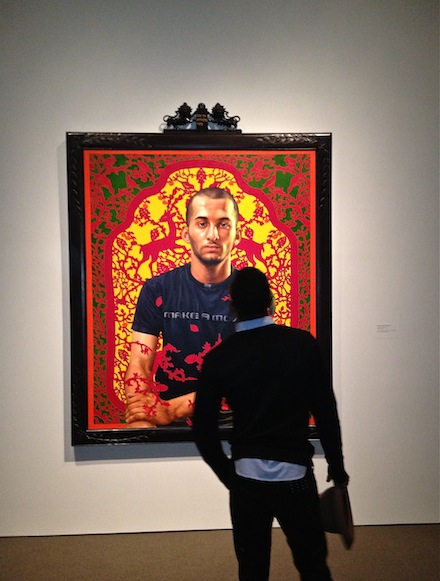 Kehinde Wiley, Mahmud Abu Razak (2011) at the opening of The World Stage: Israel

Seeking to acknowledge patterns in black masculinity on a global scale, Wiley applies the same aesthetic process to the development and realization of his work, regardless of location. He begins by inserting himself into an urban setting, researching demographics and cultural traditions, and relying heavily on chance when meeting his subjects. For the Israel series, Wiley stationed himself at discos, malls, bars, and sporting venues in Jerusalem, Tel Aviv, and Lod to find volunteers. He sought out Ethiopian and native-born Jewish and Arab-Israeli young men, allowing a unifying urban sensibility to supplant divisions forged by religion or ethnicity. 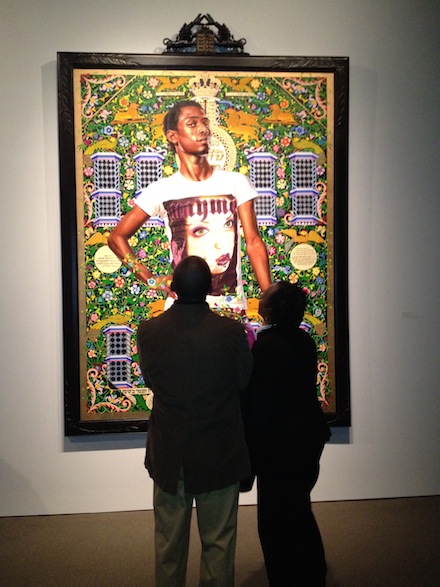 Kehinde Wiley, Benediter Brkou (2011) at the opening of The World Stage: Israel

In all of his work, Wiley initiates exchange with his subjects through the camera lens. Setting up photo shoots in which subjects feel most comfortable, Wiley pays those who decide to take part—though he says an estimated 60% refused to participate at all. In conversation with pop culture contributor to the Today Show, Lola Ogunnaike, at the Jewish Museum on March 15, 2012, Wiley emphasized a willingness among young urban Israelis to tell their stories. The artist photographs participants dressed in their street clothes and posed in compositions drawn from 18th and 19th century European portraiture. Influenced by 1970s photo-realism, Wiley then removes the photographs to his studio, where he paints from them directly, sampling locally specific decorative styles for the backgrounds and quoting Old Master portraiture for the handling of his subjects. With his large-scale canvases (some reaching 96 x 72 inches) Wiley appropriates a traditional language of power, which equates size with importance, in order to embolden those often left invisible. 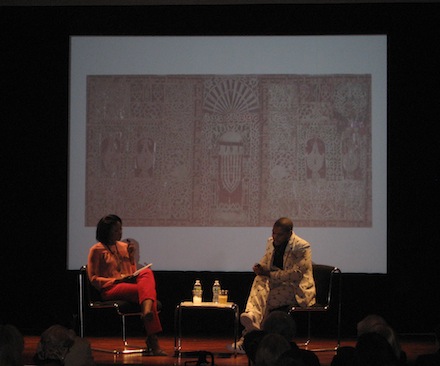 Kehinde Wiley in conversation with Today Show contributor Lola Ogunnaike at The Jewish Museum on March 15, 2012.

He merges this historically dominant aesthetic tradition with a more culturally specific one, here placing his male subjects against delicate patterning based upon Eastern European mizrah, conventionally placed on a wall in the home to indicate the direction of Jerusalem. Rendering these intricate, ritualistic papercuts in vibrant, almost garish, colors, Kehinde’s larger than life portraits overwhelm the viewer. Wiley places each portrait in a hand-carved frame that supports a text—the Ten Commandments for the Jewish men and the plea of Rodney King, 1991 victim of police brutality, for his Arab subjects. Interested in these stylistic, cultural, racial, and religious juxtapositions, Wiley states, “The fusion between the sacred and profane, of the high and low. These are things that really turn me on.” 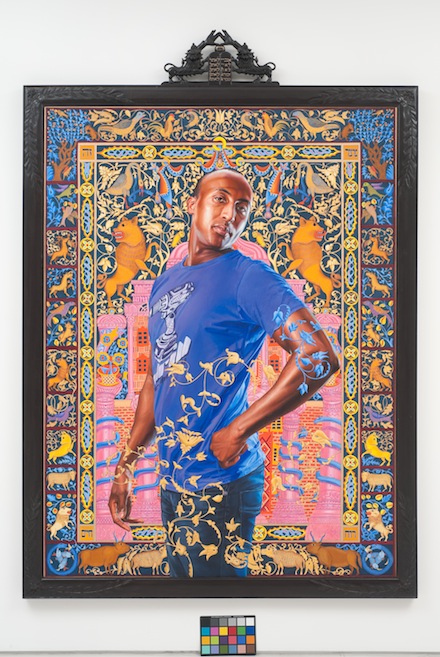 The Jewish Museum’s relationship with Wiley grew from their acquisition of his portrait Alios Itzhak, a self-assured Ethiopian-Israeli man in jeans and a t-shirt set against a background inspired by a 19th century mizrah in the museum’s collection. The oil and gold enamel on canvas painting of Itzhak has become the emblem of the exhibition as curated by Karen Levitov, even gracing the side of a building on Houston Street in mural form through May 23, 2012. Levitov paired Wiley’s 14 portraits with 11 historical papercuts and textiles from the museum’s permanent collection, deepening the artist’s temporal and aesthetic juxtapositions for the viewer. While an institution devoted to the intersection of art and Jewish culture from ancient to modern times, The Jewish Museum finds a new sense of diversity and contemporaneity with their presentation of Kehinde Wiley’s globally focused vision. 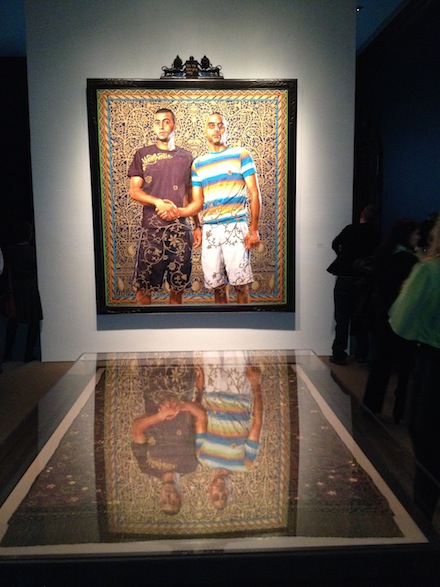 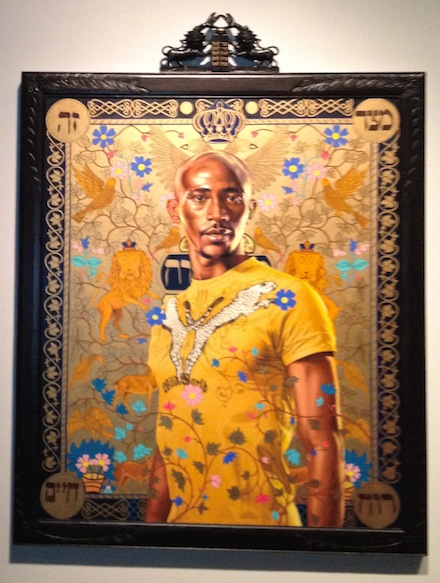 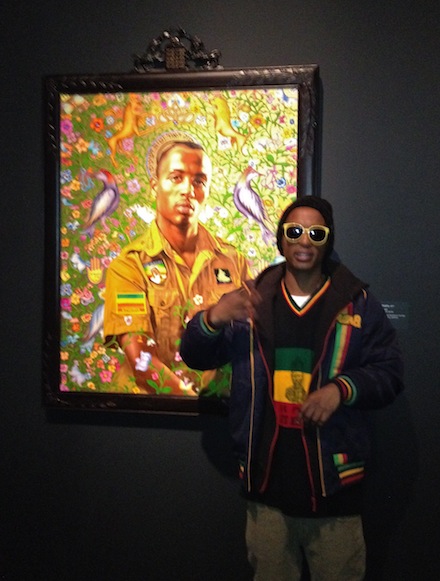 Ethiopian-Israeli hip-hop artist Kalkidan Mashasha in front of his portrait by Kehinde Wiley at the opening of The World Stage: Israel 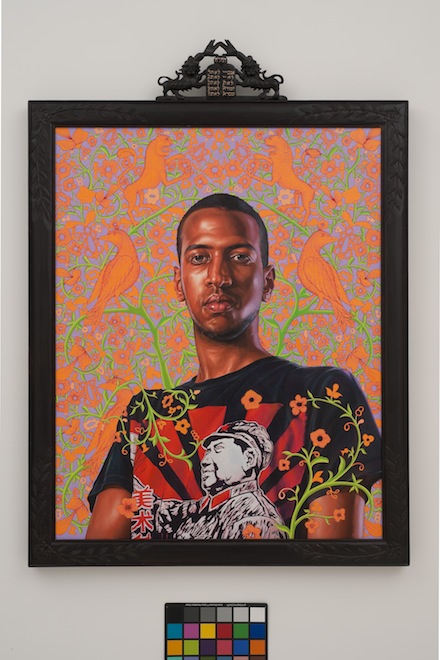 This entry was posted on Wednesday, March 28th, 2012 at 12:01 am and is filed under AO On Site, Art News, Go See. You can follow any responses to this entry through the RSS 2.0 feed. You can leave a response, or trackback from your own site.