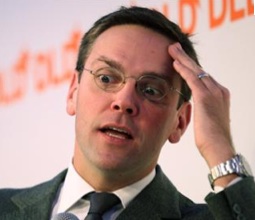 ‬James Murdoch chooses to leave the board at Sotheby’s in May, opting to “focus on his core responsibilities at News Corps” [AO Newslink]

The Atlanta Journal-Constitution February 25, 2007 Byline: Patti Bond Feb. 25–In prepping for his debut as the new leader of Home Depot’s orange-aproned crew, Frank Blake, a Harvard intellect and former editor of the esteemed Columbia Law Review, consulted the history books.

Home Depot’s history book, that is.

Blake’s first official proclamation as chief executive of Atlanta-based Home Depot, videotaped on his first day on the job last month, wasn’t a canned speech that droned on about his grand vision for the future.

Instead, Blake invoked the past, pulling out “Built From Scratch,” the Home Depot biography penned by the retailer’s revered founders. Earnestly, Blake recited a passage about their belief in an entrepreneurial culture and zeal for service, glancing up at the camera as if he were a professor leading an online study group.

He then told employees he was dusting off Home Depot’s old inverted-pyramid structure — shelved during his predecessor’s reign.

“You’ll see the associates and customers at the top, and me as CEO at the bottom,” Blake said.

That brief act, broadcast to cubicles and store break rooms across the chain, made a huge impression among a staff that is somewhat shell-shocked from the internal turmoil at Home Depot in recent years.

“It was a wonderful moment,” said Chief Financial Officer Carol Tome, a 12-year veteran of Home Depot and the only top-tier executive remaining who worked with founders Bernie Marcus and Arthur Blank when they ran the company.

“It was a very powerful way for him to start because it really resonated with everyone here.” In light of Home Depot’s recent history, it’s easy to see why Blake is so eager to harken back to the retailer’s glory days.

The 57-year-old former corporate lawyer inherited a company that was lambasted for being tone-deaf to investors and employees alike as General Electric veteran and former chief Bob Nardelli relentlessly pursued a strategy anchored in financial metrics at the expense of morale, insiders say.

An executive pay controversy consumed most of last year and dragged into 2007 until Nardelli’s ouster last month. Even then, he left with one last fireball: $210 million in severance pay.

Home Depot is a company that’s accustomed to bigger-than-life personalities. Marcus was a former standup comic who had a knack for quotes and one-liners. Nardelli, a college football player, stayed in the limelight as the hard-charging chief who rammed into Home Depot with a playbook from GE.

Blake, on the other hand, is doing everything he can to keep out of the headlines, telling colleagues that people have had enough of the CEO being the story.

The soft-spoken Boston native has declined a barrage of requests for media interviews and photos. Friends and family aren’t talking, either.

Blake told employees he also plans to limit appearances on Home Depot’s weekly internal video broadcasts, joking that the “shine” on his head was throwing off the camera settings.

The mild-mannered chief will be front and center on Wednesday, though, as Home Depot hosts Wall Street for the company’s annual analyst conference in Atlanta. The confab has become a crucial measuring stick for Home Depot’s growth strategies and longer-range plans, but this year, it will serve as a showcase for a man who was dubbed “the accidental CEO” by one analyst. website home depot promotion code

Blake made the rounds on Wall Street in small, informal meetings shortly after Home Depot’s board named him chairman and CEO on Jan. 2, but he hasn’t made any public comments other than during the fourth-quarter earnings report last week.

Analysts and investors alike have been hungry for details in a back-to-basics plan that Blake has only sketched out in generalities so far.

In the meantime, Blake has made it clear, both symbolically and literally, that there’s a new tone at Home Depot’s headquarters near Vinings.

One of his first signals on that front came when he ditched the top-floor catered lunch service for senior executives. Blake and his top deputies have become regulars at the Chinese buffet and sandwich counter in the employee cafeteria downstairs.

His most notable meal, though, came last month during a two-hour get-together with Blank, who has been estranged from Home Depot since he relinquished the reins to Nardelli in December 2000.

“I had heard that he was the type of man who would listen twice as much as he talked, and that certainly was the case,” Blank said in an interview. “He asked me a lot of questions about how we made the company so unique, about customer service, products and other things. … I got a sincere feeling that he wants to marry the best of the past with the future, and that was really refreshing.” Blake has also met with Marcus, who dreamed up many of the concepts for Home Depot’s do-it-yourself empire. The two men recently walked stores in Florida, with the feisty Marcus rattling off suggestions, and Blake taking notes.

Blake, who is described by colleagues as an expert consensus-builder, has also thrown out the welcome mat to Home Depot’s fiercest critics, letting them speak their minds.

Rather than wage a costly proxy fight, Blake agreed to let outsider shareholder activist David Batchelder join Home Depot’s board, a move that would have been unimaginable one year ago.

Blake also met with longtime Home Depot shareholder Leigh Baier, who grew so disgruntled with Nardelli’s reign that he, too, was considering a proxy battle until Nardelli left.

The Atlanta attorney, who had a tense meeting with Nardelli at Home Depot’s corporate office late last year, was wary of the new chief until he met him in person — not at the company’s headquarters but at a nearby Home Depot store. see here home depot promotion code

“We just stood in the lumber department and talked. I basically told him that people are running out of patience and that he needs to lay out a plan to fix the problems pretty quickly,” Baier said. “He really seemed to listen and agree. There was a warmth and comfort level that I just didn’t get from Bob.” A few days later, Baier got a handwritten note from Blake, thanking him for his two cents worth, Baier said.

None of which is surprising to friends and colleagues who say Blake is a modest man and a natural diplomat.

Some chalk it up to the courtly skills he picked up from his political background — he served as a deputy secretary for the U.S. Department of Energy and as general counsel for the Environmental Protection Agency. Others say he’s just a nice guy who knows how to rule with a soft touch.

“He’s a very smart man, but he’s not a self-promoter,” said Marc B. Tucker, a corporate lawyer and partner at Baker & McKenzie who was a classmate of Blake’s in law school at Columbia University, where Blake served as editor-in-chief of the Columbia Law Review.

“It wasn’t his idea to be editor, although he was certainly talented enough,” Tucker said. “The class pleaded with him to put his name in the hat so that we could name him [to the post].” That humility has become a thread in Blake’s career, associates say.

After five years in senior slots at GE, where Blake met Nardelli, he took a sharp pay cut for a government job at the Energy Department in 2001.

Blake rejoined the corporate world in 2002 when he was recruited by Nardelli to oversee acquisitions and other corporate operations at Home Depot.

Yet even after landing the top job, Blake sought another pay cut of sorts. The most the first-time CEO will get this year is $8.9 million, a far cry from the nearly $30 million paid to Nardelli in 2005, the most recent figure available. The board originally offered him more but he declined, in light of the recent pay controversy.

Blake also made it harder on himself to get raises, seeking a change in the board’s bylaws that require more votes on compensation matters.

He also has avoided the gossip that goes with a gilded corner office with a relatively low-frills style. He and his wife, Liz, an executive for Habitat for Humanity, live in an apartment in Marietta. They also have a home on Sea Island.

Blake has been a slam dunk as personalities go, but the newly minted CEO still has a lot to prove execution-wise as Home Depot faces its worst business prospects in more than a decade.

The housing market has taken a prolonged dive, cutting demand for big-ticket items, a sector Home Depot has forged into in recent years. Meanwhile, competition from rival Lowe’s is stronger than ever.

And growth prospects aren’t as clear-cut as they were a year ago.

Blake has been described as decisive and a “strategic think tank” by his closest deputies. Still, his role in heating up — and now, cooling off — Home Depot’s wholesale supply business is spurring a lot of questions from the outside.

In his previous job as executive vice president for business development and corporate operations, Blake signed off on dozens of acquisitions that comprise HD Supply, an industrial distribution unit that caters to commercial contractors. But, less than a year after the $3 billion acquisition of Hughes Supply, Home Depot’s biggest commitment yet to the business, Blake recently said he was considering selling the unit.

Critics complain that HD Supply is less profitable than Home Depot’s retail stores and that the sprawling conglomeration is a distraction, even though it added $12 billion in revenue last year.

Blake told analysts last week that no decisions have been made yet on what to do with HD Supply. But he also reiterated that he’d be willing to get rid of it if it made financial sense for shareholders.

He said it’s part of his commitment to swing the pendulum back to Home Depot’s retail stores.

Where Nardelli strived to look for growth alternatives outside the retail realm, Blake is looking to do as much as he can within Home Depot’s warehouse stores.

All priorities are now focused on improving the stores and boosting morale among the staff of 355,000.

Colleagues say Blake, a slight man who’s more likely to wear pullovers than pinstripes, has a good shot at hitting it off with the people in the trenches.

“He is completely committed to retail,” said Tome, the CFO. “He has told the senior management team that if we see him too much [at headquarters], to kick him out. He wants to be in the stores, listening and talking to people.” On that front, Blake has one direct pipeline of information — his son, also a Frank, is the manager of a Home Depot store in North Carolina.

By all accounts, Blake, an avid runner, is off to a good start at Home Depot. But as retail experts point out, he’s in for a marathon, not a sprint.

“He’s doing two things that are extremely smart. One, he’s saying, ‘I’m not Bob Nardelli,’ and two, he’s doing everything he can to pay tribute to the Home Depot tradition,” said Staples founder Tom Stemberg, who was a classmate of Blake’s at Harvard. “It’s great body language and it’ll score him a lot of points and buy him some time, but it won’t necessarily buy him success… He’s still got a meaningful mountain to climb.” Distributed by McClatchy-Tribune Business News.

This entry was posted on Monday, March 19th, 2012 at 3:36 pm and is filed under Art News. You can follow any responses to this entry through the RSS 2.0 feed. You can leave a response, or trackback from your own site.