April 15th, 2021
REFERENCE LIBRARY
Home » New York: The populist voice of Diego Rivera’s ‘Murals for The Museum of Modern Art’ at The MoMA through May 14, 2012

New York: The populist voice of Diego Rivera’s ‘Murals for The Museum of Modern Art’ at The MoMA through May 14, 2012 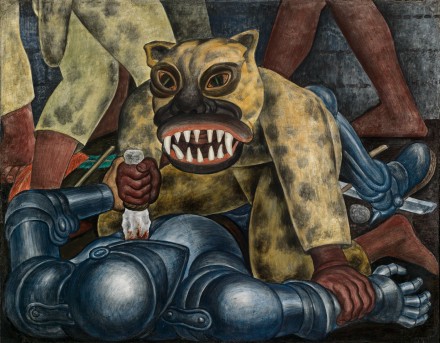 The work of Mexican muralist Diego Rivera (1886-1957) is showcased on MoMA‘s second floor through May 14th. The exhibition’s opening on November 13th coincided with Occupy Wall Street protests in Zuccotti Park, allowing the originally leftist murals to resonate with a contemporary, politicized audience. The murals, which have not been shown since their first presentation 80 years ago, are accompanied by drawings and related archival paraphernalia. A concurrent catalogue with essays by curator Leah Dickerman is also associated. 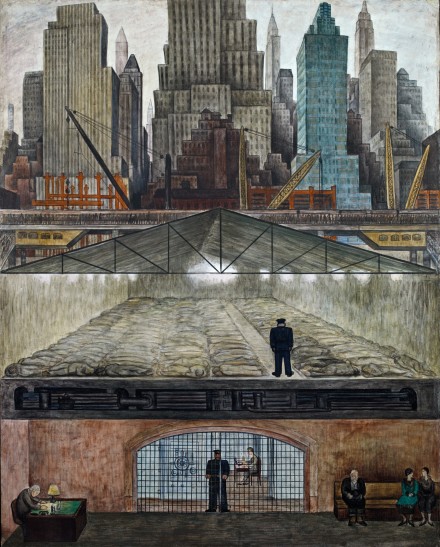 The Museum of Modern Art had just opened in 1929 when the team began commissioning contemporary artists to work specifically with the limited space at its then-location, the Heckscher Building, 730 5th Avenue at 57th Street. After only one prior invitation in 1930 to Henri Matisse, Diego Rivera came to live and showcase in New York for five weeks from December 1931 to January 1932, where he was installed with a temporary studio on the sixth floor. The entire museum consisted of only six rooms on the twelfth floor, with Rivera’s successful exhibition breaking the new museum’s attendance records, promoting both the work and the space itself. 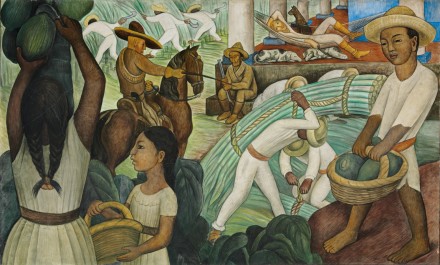 The invitation was initially to best serve on-site mural-making, despite the literal heaviness of Rivera’s finished works. While ultimately designed to be “portable,” the steel-framed concrete and mortar structures painted on with plaster weigh up to 1000 lbs. The construction process is also explained in the current showcase. 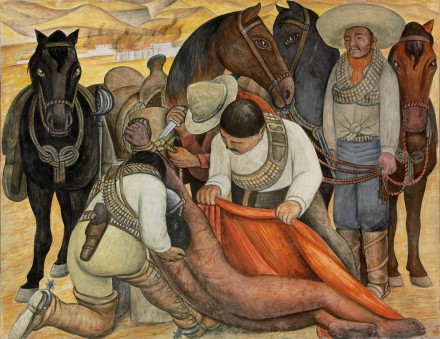 Rivera made the first five murals before the 1932 opening, concentrating on Mexican revolution and inequalities. During display, he added three new paintings on inequalities he saw taking place on his trip to New York, addressing the construction boom in Midtown that stemmed from the advantageously low cost of labor to New York’s elite during the Great Depression. 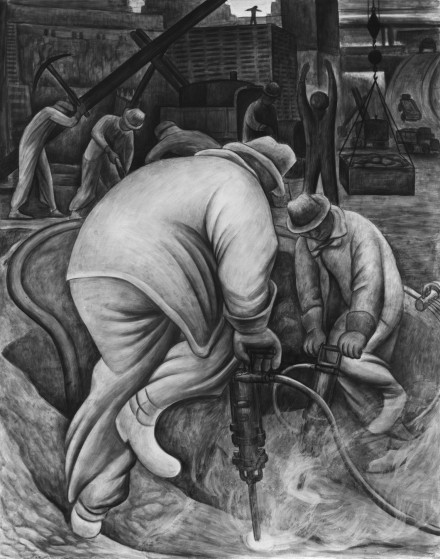 Also in New York, Rivera painted the Man at the Crossroads mural for 30 Rockefeller Center’s new Radio Corporation of America building, as sponsored by the Rockefeller family. (At the time, Abby Aldrich Rockefeller was similarly instrumental in founding the MoMA.) He had carefully campaigned for the commission when he painted Frozen Assets, which depicted the new Rockefeller center towering above other monumental buildings of the era. While the portrait was known to include Russian communist leader Vladimir Lenin, Rivera reputedly went so far as to depict John D. Rockefeller himself in a nightclub, despite his political stance for what was then the recently repealed Prohibition movement. The commissioned work was painted over by a replacement artist, but photographs of the lost Rockefeller mural are on view at MoMA. Today, the living David Rockefeller is listed as an exhibition sponsor as well as an Honorary Chairman on MoMA’s Board of Trustees. 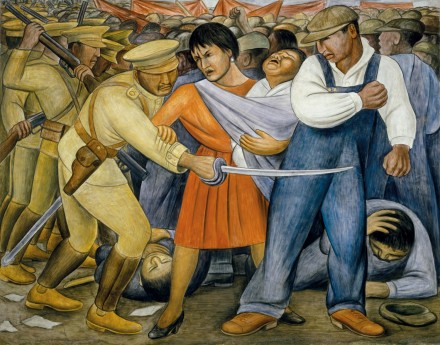 Rivera is largely lauded as a revolutionary artist—even being said to pave the way for more outspoken contemporary figures such as the Russian group Voina—yet this legacy seems to contrast his social behavior during the making of the exhibited murals. His success as a harbinger of the everyman paradoxically resulted in his own status as elite. Once set up at the Hecksher Building, patrons of the arts, socialites, and other eminent figures of the era came to meet the widely known artist. Although Rivera did sincerely represent economic and social oppression, elite sponsorship was part of his successful career. For example, Frozen Assets features a divided New York winter scene, in which the rich deposit their jewelry into a bank vault despite the presence of homeless crowds on the next panel. With its undeniable message toward the wealthy, the work was published in a 1932 edition of Fortune magazine. The dichotomy retains its resonance even under the contemporary lens of the Occupy Wall Street movement, with the ongoing showcase publicly supported by a slew of private, elite donations. 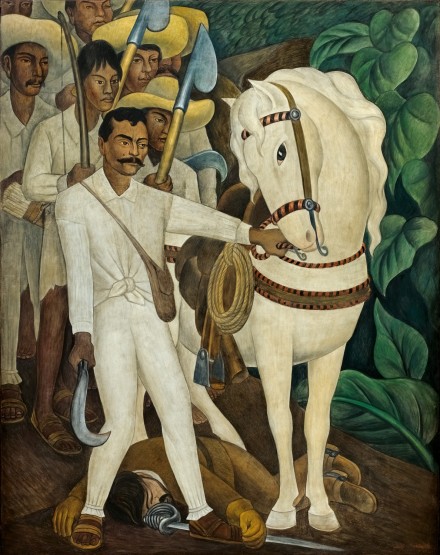 Biographical and historical information notwithstanding, emotional and artistic merit in Rivera’s work is dually relatable and appealing. Additional notable works include The Uprising, which depicts protesting proletariat figures being held back by soldiers, and Agrarian Leader Zapata (1931), featuring Mexican Revolutionary Emiliano Zapata. 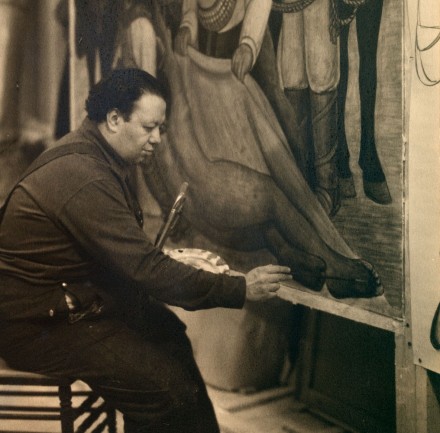 Rivera was born and educated in Mexico before traveling to Spain on a government grant at age 18. He eventually settled in Paris to paint, occasionally traveling back to Mexico for exhibitions. In Paris, he painted in the style of French Romanticists and the Italian Renaissance, although he was also interested in Cézanne. After studying Renaissance murals in Italy, he fully returned to Mexico in 1921, studying native culture and finally painting murals of his own around Mexico City.

Except for a brief stint in the Soviet Union, Rivera was an established figure in Mexico by 1929, albeit plagued politically, artistically, and personally. He had recently married fellow artist Frida Kahlo, and was officially expelled from the Communist Party of Mexico for his alignment with Leon Trotsky, whom he later hosted in his home country. Due to emerging controversies in Mexico, Rivera spent the early 1930s working and traveling in the United States, painting murals Allegory of California (1931), and Making of a Fresco, Showing the Building of a City (1931) in San Francisco, and Detroit Industry (1932–1933), in Michigan.

When the number of mural commissions slowed by the late 1930s, Rivera painted portraits of celebrities and society women. He also began construction on a pyramid-shaped museum for his Pre-Colombian art collection. His wife Frida Kahlo died in 1954, he himself dying a year later from cancer in 1955.

This entry was posted on Friday, March 2nd, 2012 at 2:45 pm and is filed under Art News, Go See. You can follow any responses to this entry through the RSS 2.0 feed. You can leave a response, or trackback from your own site.

One Response to “New York: The populist voice of Diego Rivera’s ‘Murals for The Museum of Modern Art’ at The MoMA through May 14, 2012”