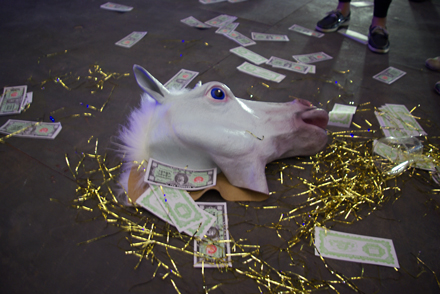 All photos on site for Art Observed by Aubrey Roemer.

The Bruce High Quality Foundation held an Easter celebration at MoMA PS1 this past Sunday in typical DIY Bruce fashion. From 3–6 PM, a gamut of bands played in the Performance Dome while a lamb roasted outside, and an Easter egg hunt included cigarettes. While the group’s Brucennial 2012 exhibition continues through April 20, the one-day event in the courtyard of PS1 was titled Bruceforma 2012: The Resurrection. 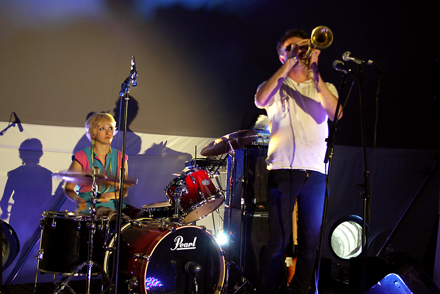 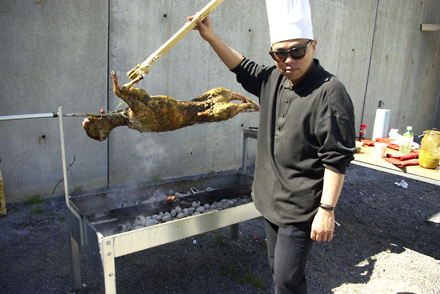 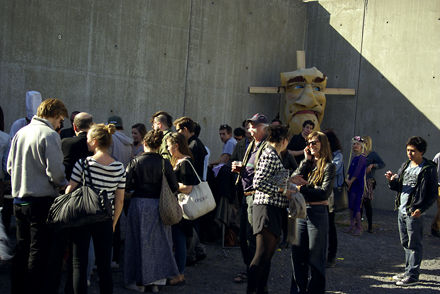 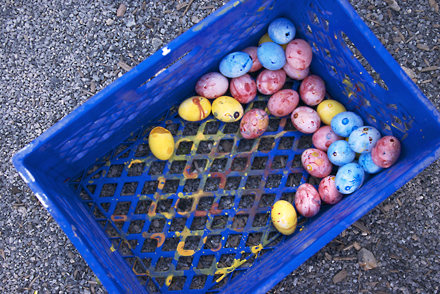 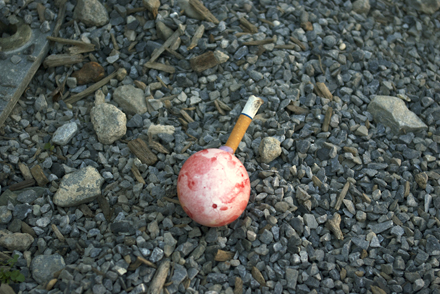 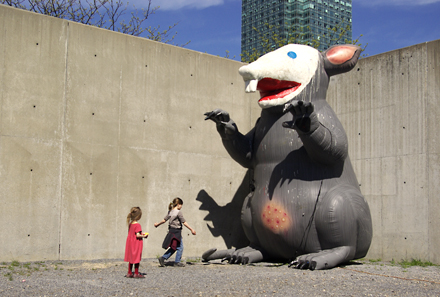 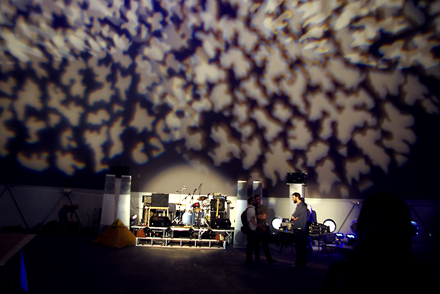 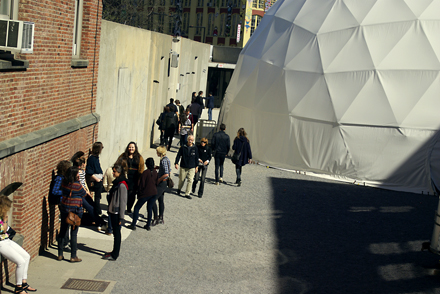 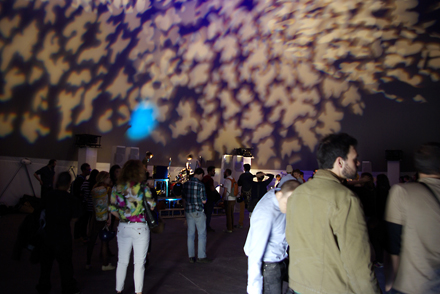 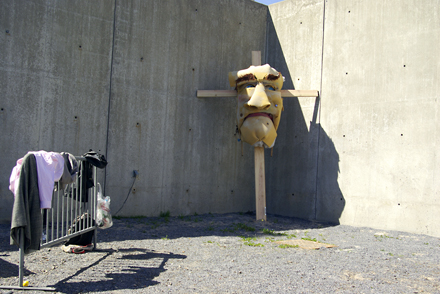 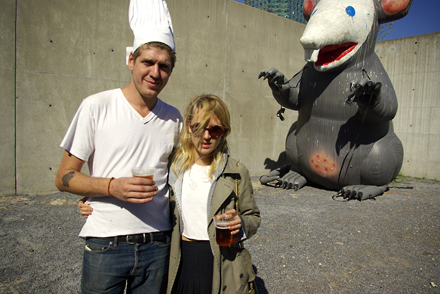 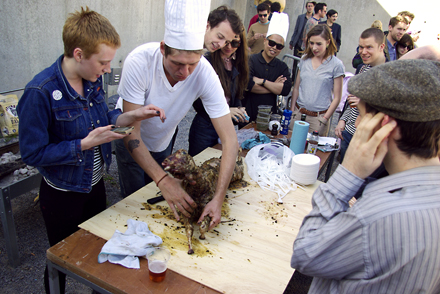 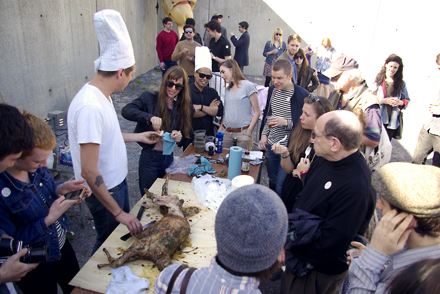 The Independent (London, England) January 27, 1999 | Robert Fisk Middle East Correspondent UNEASY LIES the head that wears a crown. Until last week, Crown Prince Hassan thought he wore one. Until yesterday, his enraged brother, King Hussein, might have expected a few more months upon the throne; but every Jordanian knew the significance of the monarch’s sudden flight back to America. The king is dying, his final battle with lymphoma cancer nearing its end.

Back in Amman – in a royal palace where shock is said to emanate from every face – Abdullah, the new crown prince and eldest son, is hourly expected to be made regent.

There is indeed something Shakespearean about Hussein’s departure. We may occasionally have made light of the Plucky Little King, but now he has disgraced the cosy, avuncular figure of his younger brother, Hassan, with a speed that would have been the envy of any Tudor. First there was the veiled criticism of Hassan in King Hussein’s television interview, then the failure of Hassan to show up at the airport for the king’s return from his “successful” hospital treatment in the United States. And then the sword fell. In his letter yesterday, published as the dying man was being taken back to the Mayo Clinic in Boston with a low blood count and “fever”, the King accused Hassan of plotting little less than a coup d’etat. His sins were already known, of course. In the King’s absence – while chemotherapy was turning his brother into a wraith on the other side of the Atlantic – Hassan tried to fire Hussein’s most loyal servant, Field Marshal Abdul-Hafez Mureii-Kaabneh, chief of staff of the Jordanian army. The word treachery was not used. But what other conclusion was the King likely to draw from the stories that had reached him daily from Amman? The newspapers in Jordan were starting to carry Crown Prince Hassan’s picture on every front page, on every day of every week. Flattering portraits of Hassan – a portly and unathletic figure at the best of times – flooded the country, with pictures (a dangerous precedent, this) of his own son. Although he spoke to the King many times daily by phone, his Pakistani wife, Princess Sarvath, never bothered to visit Hussein in his American clinic – even when the princess spent a month in Washington. Hassan clearly believed the King would never return to Amman. Did Abdullah – himself a lieutenant-general, an Oxford and Georgetown graduate and Sandhurst trainee – warn his father of what Hassan was plotting within the army? The word mutiny is darkly muttered in Amman. As commander of a special forces “counter- terrorism” unit, Abdullah must have known what was afoot. Or did the Americans, never fond of the stubborn Hassan, feed the King’s suspicions in his clinic? As for Queen Noor, the King’s present wife, we can only imagine her reaction. A strong-willed woman, she must have wished her own son, Hanza, to be crown prince. Yet it was widely believed in Amman that if Hassan had become king, Queen Noor would have left the country. For now, Jordanians are waiting for the fatal news from America. Only a week after they had welcomed back their monarch, he has departed. Sad stories of the death of kings do not come easily to a nation that has been ruled by one monarch for almost half a century. And Crown Prince Abdullah – how strange it seems to use those words – must know that perfidy lurks along his borders. Will Israel, which sent a murder squad to the streets of Amman after Hussein’s peace treaty with Israel, resist the temptation for intrigue? Will President Saddam Hussein, who has also sent his assassination experts to Amman, leave the young crown prince in peace? What will President Assad – grooming a son for his succession – feel for the parachutist prince who will soon rule Jordan? They all know that Abdullah already commands a special intelligence unit and a public security brigade. Hitherto he has spent his time countering Iraqi smuggling and what he once called “terrorist infiltrations” from Syria. Now that will be the least of his troubles. go to web site feed the king website feed the king

This entry was posted on Wednesday, April 11th, 2012 at 1:01 am and is filed under AO On Site, Art News. You can follow any responses to this entry through the RSS 2.0 feed. You can leave a response, or trackback from your own site.