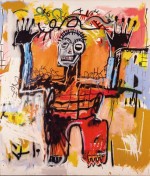 A self-portrait by the late Jean-Michel Basquiat is expected to fetch $20 million in the June 27 Christie’s International sale of postwar and contemporary art in London. “The vivid acrylic, oilstick and spray-paint canvas will be offered after another untitled 1981 work sold for an artist-record $16.3 million at Phillips de Pury & Co. in New York, on May 10.”

Read the article via Bloomberg News

This entry was posted on Monday, June 4th, 2012 at 3:57 pm and is filed under Art News. You can follow any responses to this entry through the RSS 2.0 feed. You can leave a response, or trackback from your own site.