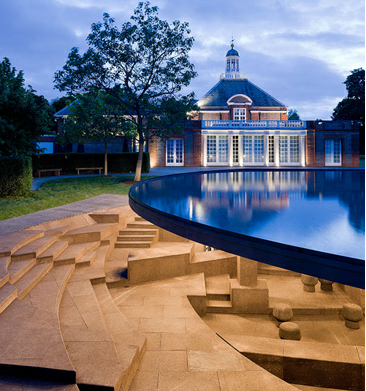 This summer the recently opened Serpentine Gallery Pavilion in London celebrates its 12th anniversary.  Since 2000, this architectural event has featured temporary structures by such designers as Zaha Hadid and Jean Nouvel.  This year, Chinese artist Ai Weiwei, along with Swiss architects Jacques Herzog and Pierre de Meuron (Herzog & de Meuron), known for their design of the Tate Modern and previous collaboration with Ai on Beijing’s Bird Nest National Stadium, has dug down into the Kensington Gardens to create an underground pavilion commemorating its long history. 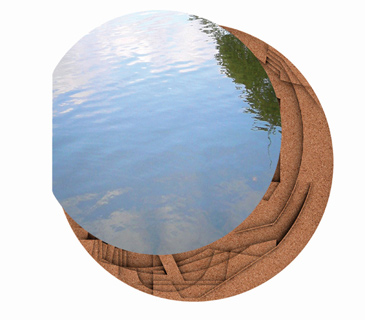 Unfortunately Ai and Herzog & de Meuron had to communicate their plans for this year’s Pavilion through Skype calls, as Ai is currently under travel restrictions due to his arrest last year by the Chinese government.  Thus he was also unable to attend the opening of his pavilion on May 31.  The Serpentine Gallery instead screened a video of Ai at the event, where he acknowledged his fellow designers: “I have worked with Herzog and de Meuron on several projects.  We have very good communication and each collaboration is very meaningful” (Guardian News). 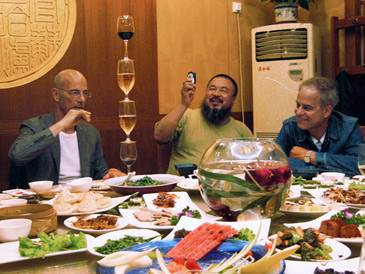 The structure itself is comprised of a large circular structure featuring two levels.  The upper roof contains a shallow layer of water to reflect light and the London sky, while the lower level, covered entirely in cork, houses mushroom-shaped stools randomly arranged for visitors to rest on.  12 cork-layered steel pillars support the floating roof and simultaneously serve to represent the past 12 pavilions.  “What Ai Weiwei and Herzog & de Meuron have come up with isn’t a grand edifice – a homage to themselves – but a homage to everyone else,” says Julian Peyton-Jones, director of the Serpentine (The Telegraph). 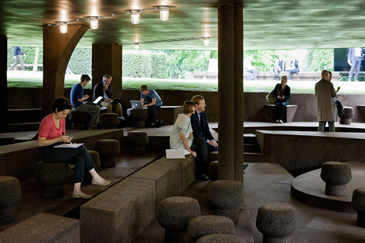 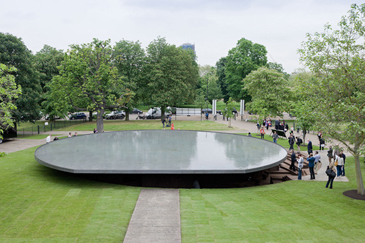 “[Ai himself] says the pavilion is an “archaeological gesture”. The aim of the design is to encourage visitors to look beneath the surface of the park, and back in time” (The Independent).  He also expresses his sentiments on not being able to visit his own exhibition, “Of course I’d like to see the pavilion in London and see old friends, and see how it’s existing. In life we have a lot of regrets and it’s part of life.” 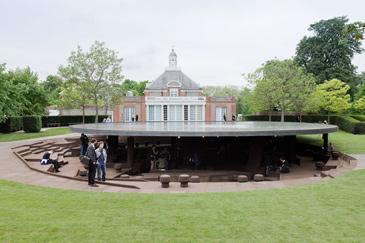 The pavilion was unveiled yesterday, but has already been purchased by billionaire Lakshmi Mittal and his wife Usha, who will gain ownership at the exhibit’s end on October 14.

This entry was posted on Friday, June 1st, 2012 at 7:54 pm and is filed under Art News. You can follow any responses to this entry through the RSS 2.0 feed. You can leave a response, or trackback from your own site.