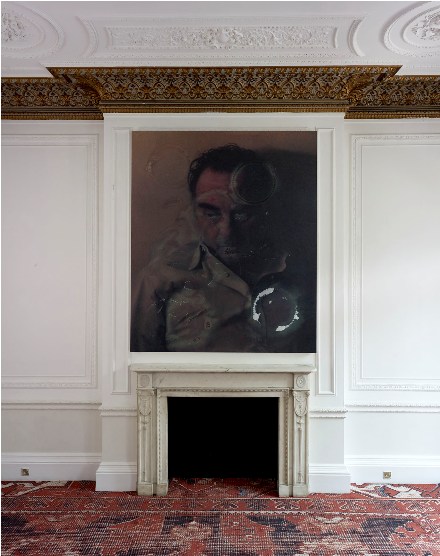 Rudolf Stingel’s new untitled installation presented through Sadie Coles gallery at 9 Grosvenor Place, an off-site townhouse in London, is on view through July 4.  A monumental self-portrait painted from a damaged photograph of the artist taken by Roland Bolego hangs above a fireplace at the emptied home, surrounded by customized carpet– a common addition seen in other site-specific works by Stingel, such as the floral design of Plan B (1994). 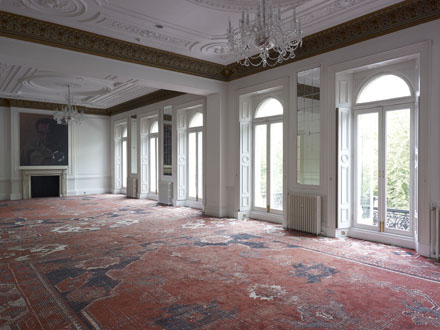 Water rings from an ill-placed beer bottle and gradient textures from the overexposure of light seen in the original photo have been included in the work, marring the artists face and clothes. An unknown narrative is suggested by the compromised surface that runs parallel to the image itself.  The sum of these parts reads as deterioration and neglect, subverted by the work’s glorified position, making it reminiscent of an altarpiece. 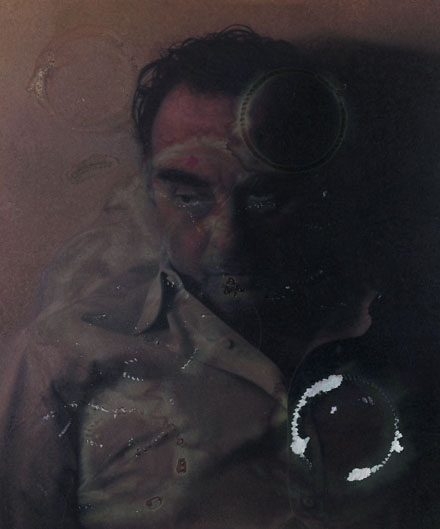 Stingel’s disheveled appearance, his sideways, domineering stare, and the morbid palette of the plum, olive, and midnight blue contrast the opulent Georgian interior, with its high, clean, white walls, and its ceiling adorned with antique moulding. The work appears bruised and stained simultaneously, obscuring Stingel’s renderings of skin versus the film upon which the image has been laid, and subsequently tarnished. 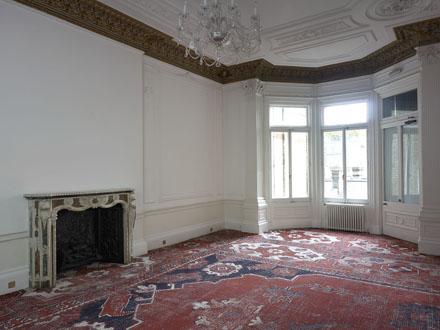 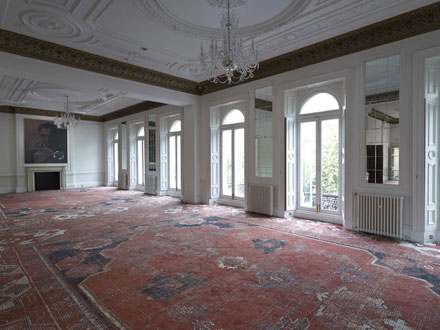 The red and terracotta colored carpet with an Asian pattern was printed from composite digital images, and installed exclusively for the work. Stingel used the same technique at Berlin’s Neue Nationalgalerie in 2010. The technique moves viewers into the picture plane, giving the work a participatory element.

Untitled (2012) marries an aesthetic of failure and deterioration with the immaculate creation of new work, and subversive techniques in the latest of Stingel’s signature environments.

This entry was posted on Saturday, June 30th, 2012 at 11:50 am and is filed under Art News. You can follow any responses to this entry through the RSS 2.0 feed. Both comments and pings are currently closed.